It's the end of the month, time to write a new review! I found the first of these two books at a local library's used book sale. I remembered enjoying White Teeth and wanted something funny to read, plus was intrigued by the Chinese-Jewish titular character and the author's insights on fame. The other was a recommendation from a college friend that I bought (possibly around the same time I bought The Martyred?), and then let sit for a while until the timing felt right. I'd yet to read any books about the internment of Japanese Americans and how life was for them after World War II ended, and figured the novel would be a solid start.

The Autograph Man by Zadie Smith 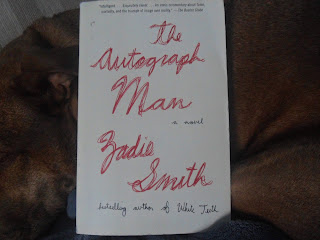 Combine unresolved grief with a quarter-life crisis, chronic selfishness, low self-esteem, and a love for old Hollywood movie stars and their artifacts, and you've got what's bugging Alex-Li. His father passed away suddenly when he was 12 years old, and 15 years later he still hasn't come to terms with it. During this particular time in Alex-Li's life, his best friend Adam (a young Black Jewish man who's at once the most devout and the most eccentric of their friend group) insists that Alex-Li do a traditional Jewish memorial service for his dad. They argue about it every year, but this time Adam's not letting it go.

Despite having a Jewish mom and having lived his whole life in a London suburb with a significant Jewish population, Alex-Li is not particularly religious. And yet, for years he's been obsessively writing notes for a supposed book wherein he categorizes things, people, and aspects of life as "Jewish" or "goyish". Alex-Li also spends much of his time obsessively categorizing celebrities, because he's an "autograph man" who collects and trades items signed or written by famous people. Fame is always on his mind, not only as someone who desperately wants to feel significant in his own life, but even more so as someone whose bread and butter relies on the monetary value that fame confers on his wares. And his wares suddenly become exponentially more valuable when a bout of intoxicated stupor leads him to New York City, where he meets Kitty Alexander (his favorite actress of all time) and somehow gets unique access to some of her most personal possessions.

I'm curious about something. We spend a lot of time with Alex-Li and his friends, including the aforementioned Adam, Adam's sister (and Alex-Li's on-and-off girlfriend) Esther, gentle and nervous Joseph against whom Alex-Li has a grudge for some paranoid reason, and Rubenfine, the smart aleck who became a rabbi because his dad wanted him to. Plus there's his handful of friends who are also autograph men. And what I'm about to say isn't an issue with a book, this is simply me thinking about Alex-Li as a person. I'm just... not sure why any of these people are still his friends, or why Esther stays with him? He's not a cruel person, but he is incredibly careless. Astonishingly oblivious at best. And he's remarkably self-absorbed in both his endeavors and his despair, regardless of whether his actions inconvenience or hurt others, or whether his life is truly as bereft as he imagines it to be. There are some things he does (or doesn't do) that would run off even the best of people. Do his friends stick around because they've known each other all their lives? Do they still feel sorry for him and cut him slack because his dad died? Because they know Alex-Li is a sensitive person? But then, what does Alex-Li do for them, as a friend? What does he contribute to any of his relationships, other than amusement and/or sex? I'm not saying that Alex-Li doesn't deserve friendship because he's sad and has destructive habits. What I am saying is that, the fact that he doesn't lose a single friend (or girlfriend) during the course of his mess is nothing short of a miracle.

To put it plainly, The Autograph Man is an existential novel that's also clever and disarmingly funny. This is a perfect choice for when you just want to carry a book around with you for a while, one that takes you on a slow ride and makes you laugh and think in equal measure. If you are a Zadie Smith fan, are depressed, are a movie buff, have ever had a bad friend or been one, need a few laughs, have a penchant for winding tangents, have any interest in or knowledge of Judaism, or wonder what it'd be like to finally meet your idol in real life, then read this book!


"Groupies hate musicians. Moviegoers hate movie stars. Autograph Men hate celebrities. We love our gods. But we do not love our subjection" (288).

"There will never be that moment, don't you get it? When you've had all the different people you want, when you're done, when you settle for me. People don't settle for people. They resolve to be with them. It takes faith. You draw a circle in the sand and you agree to stand in it and believe in it. It's faith, you idiot" (291). 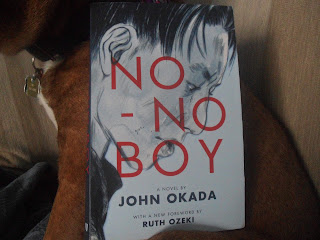 I'm thankful for the care and context that Ruth Ozeki and John Okada put into writing the foreword and preface (respectively) for this novel, so I could gain a nascent understanding of just how important it is. This story about a young man's return home after internment was published in 1957, and the general reaction was that it was too soon. World War II hadn't ended that long ago, and most Japanese Americans were trying to re-stabilize and get the rest of America's ire off their backs. Okada died before his novel was rediscovered and later re-issued 20 years later, when it finally started to make the impact it deserved to make.

Basically, after Japan bombed Pearl Harbor and the U.S. government forced thousands of people of Japanese ancestry from the West Coast into internment camps, the government also made all eligible men answer two written questions about their willingness to be drafted and to swear allegiance to the United States, forsaking all other allegiances (especially to Japan). Many answered "yes" to both questions and were able to supposedly prove their loyalty to Uncle Sam by fighting for the U.S. in WW2, while those who answered "no" to both (you guessed it, the "no-no boys") were put in prison. Ichiro, the main character of this novel, wasn't particularly pro-Japan, but was influenced by his fiercely pro-Japanese mother and also resented being plucked from his life and treated like a pariah by the U.S. government, so he answered "no". Two years later, we meet Ichiro as he returns to his hometown of Seattle and tries to pick up the pieces of his life.

Being interned is devastating enough, but being a no-no boy also earns him the scorn of most fellow Japanese people, so when Ichiro first returns home he has no idea where he belongs. His parents were able to take over a small grocery store that a different Japanese family owned, so he has somewhere to stay, but little else. He doesn't know what to do with himself (he was an engineering student prior to internment), and he is full of confusion and rage, most of which he turns on his parents or himself. It was hard for me to keep reading at times because the self-blame that he carries is so heartbreakingly heavy. This is the late '40s, before Civil Rights and counterculture movements, and conformity is still highly valued and expected. Ichiro and men like him can't help but buy into the belief that rather than righteous, their resistance was a grave mistake, and that everything they've lost or are suffering through as a result is their own fault. Nevermind the fact that many non-Japanese people still harbor scorn or suspicion toward Japanese people anyway, regardless of who served in the U.S. military and who didn't.

Over time, Ichiro manages to find friends in other young Japanese Americans: an aimless fellow no-no boy named Freddie, a veteran named Kenji, and a woman named Emi who owns a farm. But even they have their own post-war struggles. Freddie's recklessness starts to catch up with him, Kenji has a progressive leg injury, and Emi's a lonely widow-adjacent who unwaveringly believes in the redeeming power of assimilating to American (white) cultural norms. Each of them is an example to Ichiro of what his life could have been or could be going forward, and he floats between Seattle and Portland desperately seeking a new start.

I have to applaud how brilliantly Okada demonstrates the way generational differences shape Ichiro's story. Many Issei (first generation Japanese Americans) saw moving from Japan to the States as temporary: they'd settle in, work really hard while raising their families, earn and save a ton of money, and then eventually return to live comfortable lives in Japan. Many of them didn't speak English or see themselves as part of America, unlike their American-born Nisei (second generation) children who grew up feeling very much both Japanese and American. Ichiro's parents are one such Issei couple, which makes it nearly impossible for them to fully understand how hard it is for Ichiro to make sense of what's happened and live a so-called normal life again. But Ichiro's got it even worse because his mom refuses to believe that Japan lost the war. She believes that the empire will send a ship to bring all overseas Japanese back to Japan, that the ones who fought for the U.S. aren't "real" Japanese people, and that Ichiro is worthy to be her son solely because he resisted the draft. Even when she and Ichiro butt heads, Ichiro's younger brother distances himself from them, her relatives in Japan send letters begging for food and supplies, and her normally passive and compliant husband blows up at her, she's adamant that Japan was victorious and she'll get to go home soon.

In a way, Ichiro's self-flagellation testifies to how detrimentally effective internment and imprisonment were as humiliation tactics. He returns to Seattle burdened with shame and regret, desperate for redemption, for a second chance, for any form of approval that would signify that there's still a place for him to belong in American society. I don't think it's any coincidence that the two people who suffer the most abrupt and yet unforgettably violent deaths in No-No Boy are the two people who represent what Ichiro most loathes about himself, past "mistakes" and present predicament included. If you want to learn about Japanese American internment, are interested in racial politics, or have ever blamed yourself for something that wasn't truly your fault, then read this book!


"But I did not remember or I could not remember because, when one is born in America and learning to love it more and more every day without thinking it, it is not an easy thing to discover suddenly that being American is a terribly incomplete thing if one's face is not white and one's parents are Japanese of the country Japan which attacked America" (49).