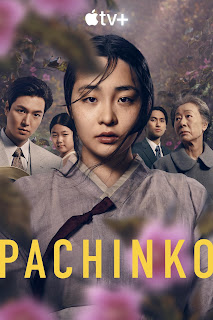 Based on Min Jin Lee's 2017 novel of the same name, 'Pachinko' is an American production that traces the history of the Baeks, a Korean family contending with Japanese hegemony from 1915 Busan to 1989 Tokyo. (In the show, at least in season 1, 1989 is the present.) Much of the events center around the oldest and youngest members of the Baek family. There's Sunja (Youn Yuh-jung from the 2020 film Minari), a permanent resident in Japan who was born in Busan during Japan's colonization of Korea and who moved to Osaka as a pregnant newlywed in 1931. And there's her grandson Solomon, an NYC-based finance guy who takes a temporary assignment in Tokyo in hopes of elevating his career. Solomon was born and raised in Osaka but was sent by his father to continue his schooling in the US as a teenager, and in bubble era Tokyo he mistakenly assumes that his Korean-ness is irrelevant to his professional aspirations because anti-Korean sentiment in Japan is a thing of the past. The deal he's trying to close (convincing a Korean grandmother to sell her home to his firm's client so the client can build a luxury hotel on that land) forces him to confront his Korean identity in unanticipated ways. Concurrently, Sunja reflects on all the difficulty that she's survived and pushes herself to return to her birth country (accompanied by her son Mozasu, Solomon's father) for the first time since 1931.
Sunja's storyline is extremely faithful to the book, with the exception of her return to Busan (the book version of Sunja never sets foot in Korea again). And although Solomon's character exists in the book as well, the TV version of him is where the 'Pachinko' creators seem to take the most liberties. In the book, there's a character named Noa (Solomon's father's older brother, so his uncle) who similarly struggles to embrace being Korean, to the point of cutting off contact with his family so he can pass as Japanese, and eventually dying by suicide. 'Pachinko' takes the tortured self-hatred of Book Noa and replaces it with the naiveté and arrogance of TV Solomon. TV Noa's misfortune is referenced in retrospect (though not in detail), and he does appear as a child, but it remains to be seen whether season 2 will portray the more tragic aspects of that character as written in the novel.
Because Pachinko is one my favorite novels, watching the TV adaptation has been a no-brainer for me ever since I first heard that it was in development. And then I heard that Youn Yuh-jung was playing Sunja, that Hallyu superstar Lee Min-ho (my K-drama crush in high school) was playing Sunja's yakuza baby daddy Hansu, and that Justin Chon (Seoul Searching, Gook, etc.) was one of the co-directors, and that's all I needed to know! Masterful wouldn't even scratch the surface of describing what a cinematic and historical gift 'Pachinko' is. You wanna talk about art that sets the proverbial captives free? This show is it! Especially episode 4, where Sunja and Solomon each witness different forms of Korean resistance and embrace getting rained on (literally) as they return to their true selves. And Lee Min-ho's solo episode (episode 7) about how Hansu survived the 1923 Great Kanto Earthquake AND the ensuing Kanto Massacre that targeted Korean people? That was a big-budget history lesson that broke my heart. Those events aren't mentioned in the novel, so I know the 'Pachinko' team did their research for that one! Have I not said enough? Watch 'Pachinko' if you know what's good for you!
Having reviewed all the Japanese and Japanese-ish dramas that I've watched recently, I gotta pick a favorite, right? Excluding the honorable mentions, 'Kikazaru Koi ni wa Riyuu ga Atte' is my favorite this time around. Sure, 'Koi Nante, Honki de Yatte Dou Suru no?'' has a very similar premise and a similarly lengthy title, commits more to its romantic angle, and has a more cohesive plot (especially if we're comparing final episodes). But 'Kikazaru Koi' has Yokohama Ryuusei as the male lead, stealing every scene he's in even when he has no dialogue, and for that, 'Kikazaru Koi' is the winner in my book! And if we're including the honorable mentions, then 'Pachinko' far and away surpasses all of the other five shows. Yes, I'm biased because it's based on a book I already love, but so be it! Now off I go to watch more J-dramas!
Posted by Deela (Danielle G.) at 11:20 PM