Lately I've been reading so much but not writing! Sometimes it takes me a while to get started on reviews because while reading I think about all the things I could say about a book. Usually I respect what I read enough to let it marinate rather than rushing to write about it. But I never want to give it all away, and there's no point in spending hours agonizing over something that's supposed be fun! So without further delay, here are a book that I found at a bargain book warehouse and another that I found at Costco. 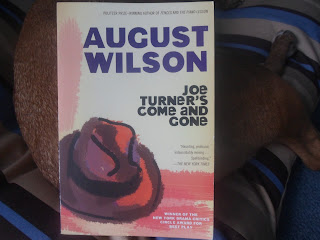 This is the fourth of August Wilson's Century Cycle plays that I've read, and the last one that I have in my possession (need to find the other ones!). This is undoubtedly my favorite. Set in the 1910s, it's late enough for the Great Migration to begin, but still early enough for people who were born into slavery to remember not being free. Seth and Bertha Holly run a boardinghouse in Pittsburgh that Black people of various backgrounds pass through. One such person is Herald Loomis, formerly a deacon and sharecropper, and one of countless free men captured by Joe Turner and forced to work in a prison chain gang for seven years, beginning  in 1901. Arriving in Pittsburgh with his young daughter, he's been searching for his wife for the past three years. Born free, he was made a slave, long after emancipation, by a white man who had the connections to get away with it. Loomis is the most crucial character in this play, opening wounds and asking questions that are echoed in many Black people's experiences. Questions of movement and loss, new beginnings, agency, crossed paths, missed opportunities, identity dismantled and reframed. We can't be that worthless if they won't leave us alone...but why us? Why won't they leave us alone? Loomis believes that reuniting with his wife will set things back to the way they were and make it right. But only he can claim the belonging and happiness, the freedom, that he seeks.

I've noticed in Wilson's plays that there's always a character who's more connected to the spirit world (be it God or the ancestors) than the others. These are unlikely prophets who have obvious disabilities or setbacks. In Fences, it's Uncle Gabriel, chasing hellhounds away and guarding the gates of Heaven, who had suffered a traumatic brain injury in WW2. In The Piano Lesson it's Wining Boy, the down-on-his-luck uncle who speaks to the spirits of his lynched ancestors. In Seven Guitars, it's Hedley, whose development was impaired when his father kicked him in the head as a child. His manifestos about the kingdom of God and the holiness of Black people are dripping with righteousness and madness. And in Joe Turner, it's Bynum ("bind 'em", Bynum, get it?), the longtime boardinghouse resident who uses voodoo to solve people's problems and bind them together. If you recognize Jordan Peele's film Get Out as a modern day slavery movie and understand that Black people's bodies have yet to stop being snatched since 1865, read this play.

"Then one day my daddy gave me a song. That song had a weight to it that was hard to handle. That song was hard to carry. I fought against it. Didn't want to accept that song. I tried to find my daddy to give him back the song. But I found out it wasn't his song. It was my song. It had come from way deep inside me... And that song helped me on the road. Made it smooth to where my footsteps didn't bite back at me" (71). 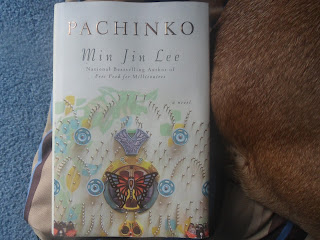 I happened upon a Japan Times headline about this book, vaguely skimmed through the article and forgot all about it. Until I found the book during a rare trip to Costco! I've read and studied much about Korean people's experiences under Japan's 35-year colonization of Korea, and have read some about Korean people's experience in Japan post-WWII, but I've thought very little about the lives of Korean people who moved to Japan during the colonial period and remained there. Pachinko is a mix of immigrant story, family history, and historical fiction that focuses on this very specific population from 1910-1989. Sunja is born and raised in Yeongdo (Busan), Korea, running a boardinghouse alongside her mother. As a pregnant teenager, she marries one of the tenants, a young minister named Isak, who decides to take care of her after her wealthy lover (and the father of her child) Hansu reveals that he already has a wife and family. In 1933 Isak and Sunja move to Osaka, Japan, where they share a house with his brother and sister-in-law and eventually have two children, Noa and Mozasu. Everyone works themselves to the bone to keep the family afloat, not being able to trust anyone despite living in a community of fellow poor Koreans. They are second-class subjects in the Japanese empire, and every major development of the time affects the family directly. And despite thinking that she's cut all ties with him, Sunja can't escape Noa's father, Hansu, who's become  the most powerful yakuza in the Kansai region and has a hand in Sunja's family's survival in ways that don't remain secret for long.

The duality between colonized people's resentment and admiration toward their oppressors is fascinating in this novel. At the time, Japan was branded as the homeland for imperial subjects, a sort of promised land. In typical imperialist fashion, Koreans were told that if they did everything right and shed their undesirable Korean nature to be just like Japanese people, they could one day be accepted as equals and help reform their own people. But of course, no amount of assimilation or code-switching is enough. Numerous Korean characters in this novel contend with immensely wretched self-hatred due directly to Japanese imperial ideology, and later due to policies and social attitudes that derive from said ideology. In this way, the book's namesake "pachinko" (a pinball machine game often played in designated parlors) is a metaphor for life: a gamble that seems or often is rigged, but which you keep playing in hopes that you'll eventually win something better. Something worthwhile. It also refers to the gambling industry that many Koreans get involved in after the war, including both Noa and Mozasu, transporting their family from the Korean ghetto in Osaka to the wealthy and cultured circles of Yokohama. If you enjoy reading family dramas and colonial history written from the perspective of the colonized, read this book!


"For every patriot fighting for a free Korea, or for any unlucky Korean bastard fighting on behalf of Japan, there were ten thousand compatriots on the ground and elsewhere who were just trying to eat. In the end, your belly was your emperor" (178).

"But all those able-bodied middle-class people who are scared of their shadows, well, they pay the mediocre tax in regular quarterly installments with compounding interest. When you play it safe, that's what happens, my friend. So if I were you, I wouldn't throw any games. I'd use every fucking advantage... It's a heavier tax than you'd think... There's nothing fucking worse than knowing that you're just like everybody else. What a messed-up, lousy experience. And in this great country... everyone wants to be like everyone else" (448-49).