BOOKS! (Life Is Short but Wide + The Magic Strings of Frankie Presto)

Today I've got a library book sale find, and a book that I bought over a year ago back when I worked at a bookstore. I bought the first book out of pure curiosity. The second book I bought mostly for the hype, as its author is kind of a local celebrity here, and the store I worked at hosted a signing event that attracted an almost obscene amount of people.

Life is Short but Wide by J. California Cooper 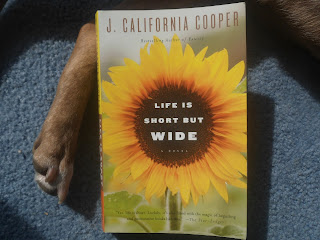 The premise on the back cover is purposely vague, so at first I didn't have a strong inclination to buy this book. But I knew that it was written by a black woman, that it was about black people in a small Oklahoma town (and I know nothing about Oklahoma), and that it was cheap. So I bought it. The first half is about a fictional town called Wideland and the black/brown community that comprises part of it. The Strong family are the focus, buying their own land and house, and going through the regular ups and downs of life along with their neighbors. The second half is largely about Myine (pronounced "mine") , the only granddaughter of the family who also ends up being the last Strong.

At first her story is a Black American country version of Cinderella. A tale in which Myine gets sold by her dad's mistress for $100 to be ordered around and molested by white people for five years, only to be brought back to her home as her stepmom's servant. This subplot has a good ending, but I'll leave you to find out what happens. As an adult, Myine falls in love with her longtime friend and neighbor Herman, but it takes a while. Life Is Short but Wide is supposed to be a sweet tale of old love in a small town, a rare treat to counter our obsession with youth and youth-related things (beauty, wild adventures, young love, etc). But it inadvertently reads as a cautionary tale, or it did for me at least. Spend most of your adult life scorning how lonely you are, when you see the person you love (and who you know loves you) nearly every day? But you're too scared to say anything, so you wait until your 70s or 80s to finally open up and start the relationship? Naw. No ma'am.

It really is a wonderful story though. A "Y-shaped" story of how Myine and Herman are brought together, and  a reminder of how tumultuous the 20th century was. Multiple characters observe or even lament that time is flying by, with too many things happening and the world changing too fast. Most of the action takes place between the 1920s and 1990s, less than a century, only two or three generations. And yet within that time frame are almost too many advancements, tragedies, wars, movements, trends, achievements, and controversies to count. My grandpa often tells me, "Just keep living," and this novel is an embodiment of that.


"But if you are counting ages, you ain't paying enough attention to the story no way" (3).

"They lived, they loved, and her being crippled did not bother them. Their faith in their God, and the adventure of their life, made them ready when love had come. Their love, and passions, made them indestructible, so far, in the life they had chosen to live. Together" (263).

The Magic Strings of Frankie Presto by Mitch Albom 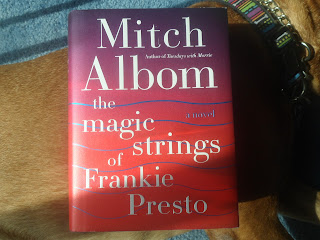 The are two things you need to remember when reading Mitch Albom novels: 1) Everyone and everything is connected, and 2) Albom stays doing too much. I read two of his books when I was younger and don't remember anything about them, but reading this one reminded me, Ohhh, yep, Mitch Albom definitely wrote this.This time we get to see Albom flex his music head muscle along with his storytelling muscle. The titular character, Francicsco de Asis Pascual Presto, or Francisco Rubio, or Frankie Presto, is a fictional musician who was born Villarreal, Spain during the Spanish Civil War. Having learned classical guitar in his hometown, he gets shipped to England as a preteen and a chance meeting with Django Reinhardt takes him to the US, where he's immersed in jazz, soul, and country music styles in Detroit and the South. Accumulating more musical skills and acquaintances along the way, playing in various bands eventually leads him to rock n' roll stardom in the 1960s. But fame is fickle, and pivotal tragedies and personal flaws lead him to a quiet and solitary life, almost abandoning music for good. He dies in front of an audience back in Villarreal, a spectacular moment witnessed by many but understand by none. And throughout this journey he has the same guitar, each of whose six strings turns blue whenever his playing ends up saving a life. Hence, Magic Strings.

The story alternates between the end of his life (famous artists and industry people gathering at his funeral to recall him as they knew him), and the beginning of his life (as narrated by music personified, who fills in all the parts of Frankie's story that no one, sometimes not even Frankie, knows). So you get Frankie's story told backward and forward, and eventually both trajectories meet to give you a whole picture of his life. I'd expected not to like it because I'd only purchased it based on hype that went stale a year and a half ago. But I actually thoroughly enjoyed it!

My only criticism is that Music's characterization is awkward in parts. It's supposed to be one of many talents that are out there working, often imperceptibly, in human lives. And while I believe in the power of music, Music the narrator has too much power (all seeing, all knowing, intervening when it sees fit) and too much space to pontificate for it to just be one of many. Maybe Albom really, really wanted Music to be God, but using "God" probably would have led to the novel being miscategorized and not selling as much, so he made God "Music" instead. Most of the time it worked, but not consistently enough for me not to feel like something was off. Other than that, as homage to musical genres and prophets, as a glance at the various paths that a musician's life can take, Magic Strings is certainly a worthwhile read. Even what it means to be a musician, what music as an art form is and how musicians employ it, such notions vary in innumerable ways. If you like legends, love stories, pop culture or modern music history, then read this book.


"Did you ever notice how music sounds different played outdoors?...That's because I was born in the open air, in the breaks of ocean waves and the whistling of sandstorms, the hoots of owls and the cackles of tui birds. I travel in echoes. I ride the breeze. I was forged in nature, rugged and raw. Only man shapes my edges to make me beautiful. Which you have done. Granted. But along the way, you have made assumptions, like the more silent the enviornment, the purer I am. Nonsense" (15-16).

"Could you imagine a bird imprisoning another bird? A horse jailing another horse? As a free from of expression, I will never understand it. I can only say that some of my saddest sounds have been heard in such places. A song inside a cage is never a song. It is a plea" (114).