As usual, the spring broadcast season is starting in Japan, meanwhile I'm stateside and just now finishing my selections for winter. I watched the first show with English subtitles, the second with and without subs based on their availability, and the third without subs entirely. 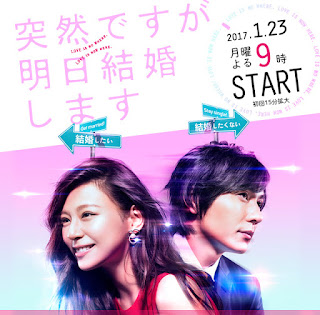 The only reason I gave this show a try was because it seemed like a manga-based romantic drama that would hold my attention, something like 'Shitsuren Chocolatier'. I was vaguely aware that the leads are both musicians/actors (Flumpool guitarist and lead vocalist Yamamura Ryuta, model/singer Nishiuchi Mariya), but I don't know them well enough to call myself a fan. The gist is that a popular TV announcer named Ryu (Yamamura), who refuses to get married, ends up in a relationship with a bank employee named Asuka (Nishiuchi), who dreams of getting married and becoming a housewife. The thing is, they get along extremely well and have excellent chemistry except for when the topic of marriage comes up. But even then, as stubborn as they are about their preferences, they respect each other's opinions. If only Asuka's rich finance colleague and Ryu's former lover weren't each trying to keep them apart. Between the main couple, obviously one side "wins" out in the end, and I'm sure you can guess which one. But the progression toward that change of heart isn't heavy handed. The show has only 9 episodes instead of 10, and the last episode is not very good (I've yet to see a good rushed ending!), but overall the show is a fun look at the motivations people have for getting into relationships. Watching Nakamura Anne ('From 5 to 9') play the "I don't need a man" best friend and Takaoka Saki ('Chijin no Ai') get her mature-but-conniving seductress thing on are also huge pluses. 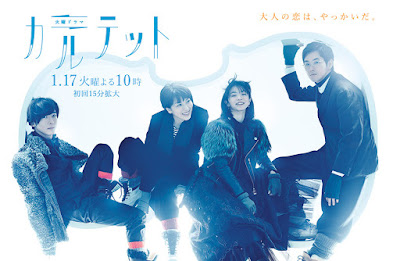 The show's premise, the fact that my fave Shiina Ringo wrote the theme song, and the fact that Mitsushima Hikari ('Woman') stars in it sold me on this show. Four musicians who did the grown-up thing and relegated their musical talent to mere hobbies meet coincidentally at a Tokyo karaoke spot (you can use karaoke rooms as practice rooms, who woulda thunk?), and decide to form a string quartet. This quartet, called Quartet Donuts Hole, is based at the second violinist's family cottage in Karuizawa. They each have less-than-stellar pasts, but lead violinist Maki is the most mysterious, speaking the softest and saying the least about herself. She becomes the anchor of the quartet and the four-way friendship, but little does she know that cellist Suzume (Mitsushima Hikari) has been paid by Maki's mother-in-law to investigate Maki's involvment in the disappearance of her husband. The humor is dry, the grown-up awkwardness is so satisfying, and the secrets revealed about each member emphasize their humanity rather than casting them as bad people. They've each endured their share of disappointment, but they also have a rare opportunity to re-engage in their musical passions with a new group of friends, long after what's often called the youthful "prime" of one's life. 'Quartet' is a slow burn, but it was my favorite of the season! 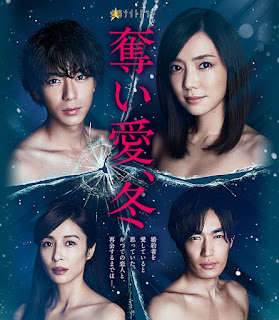 'Totsuzen desu ga' gave this show a shout-out (and it turns out that 'Ubai Ai, Fuyu' reciprocated), and since I'm still waiting on info about all the spring 2017 dramas to come out I decided to watch it. I actually just finished it a few hours ago. What's great about this show is that it's only 7 episodes, and not a minute is wasted. What I also really like about this show is that it has not one, not two, but four good n' crazy heifers (GCH). And not all of them are women, either! When talking about 2016's adultery-focused drama 'Seiseisuru hodo, Aishiteru', I expressed my profound appreciation for the scorned wife character in that show, the determined and violently spiteful woman who cuts through the mushiness and will stop at nothing to hold onto what's hers. 'Ubai Ai, Fuyu' is basically a lower-budget, more interesting version of 'Seiseisuru hodo' except the adulterous couple isn't as naive, and the GCHs move the story along more than the main leads do. Graphic designers Hikari (Kurashina Kana, 'FIRST CLASS 2') and Shin (Otani Ryouhei, 'Nigehaji') were madly in love until Shin abruptly dumped her and left her heart in shambles. Eventually Hikari  found new love with Kouta, her current fiance and fellow designer. But when work reunites Hikari and her now-married ex for the first time in years, chaos ensues. There's Hikari and Kouta's co-worker Shuko, who thrives on mess and tries to break the couple up for the fun of it. Kouta's elitist mom hates Hikari and uses her nice-nasty ways to humiliate Hikari at every chance. Kouta (Miura Shouhei, 'Suki na Hito ga Iru Koto') becomes so insecure and jealous about Shin's re-entry into Hikari's life that he has a breakdown and becomes mentally and emotionally abusive. But Shin's wife Ran (Mizuno Miki, '37.5°C no Namida' and 'I'M HOME') takes the cake! I don't want to reveal too much because you have to witness Ran's madness yourself, but she's determined to ruin Hikari. Ruin her. In every sense of he word. If you love intense draaaamaaa, then this show is for you.

All of these shows were great in their own way, but like I said, 'Quartet' was my favorite! Now, onward to spring!
Posted by Deela (Danielle G.) at 8:24 PM