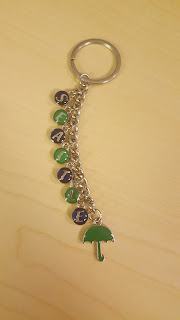 I haven't done one of these in over six months, so I'm sure I've received plenty of things in the meantime that I neglected to appreciate fully. But recently I've received a few gifts from co-workers in particular, so I wanted to take time to acknowledge them. The names mentioned are not real ones, though they do refer to very real, and kind, people.

First up, two of my co-workers went to the Pacific Northwest on a business trip a couple weeks ago, and one of them bought this keychain just for me. It certainly doesn't hurt when a city's major colors also happen to be your first and second favorite colors ever! Thanks, Anita! 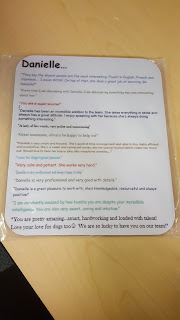 Back in December, my boss's boss had everyone participate in Secret Santa by giving compliments instead of gifts. Each of us had to write something nice about every member of the team, and then send them to my boss's boss. Everyone then received their own list, compiled by her, of all the nice things that were written about them. That was December. Last week a package of mouse pads arrived at the office, each customized with each person's list of compliments from the Secret Santa activity.  To be honest, I'd thought the activity was corny and unnecessary from the beginning, but it was representative of the team's character which I've gotten used to by now (excessive compliments to compensate for non-excessive duckets). Plus, my boss's boss likes to put a lot of though and care into her presents, so I corny or not, I couldn't not appreciate it. Thanks, Renn! 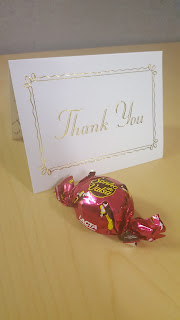 Speaking of last week, a new employee joined the team, filling the in-office team roster for the first time in many months. Lovely woman, talkative, young but especially young at heart. I'm not sure if she's still trying to ingratiate herself with us or if she's just this type of person, but at the end of her first week she gave everyone a card and a piece of Brazilian candy to express her gratitude for the warm welcome. Thanks, Drew!
Posted by Deela (Danielle G.) at 5:52 PM