I read this book in two days. I finished it last week but it continues to trouble me. I haven't felt this compelled to sit with the implications of a book, carry all its meanings with me and turn them over in my mind, since The Round House. Devastated and yet mesmerized. Spellbound. That's where I am right now with this novel.

The Vegetarian by Han Kang 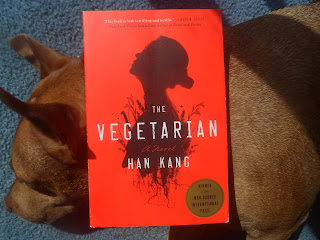 This is a novel, much like Herman Koch's The Dinner, that starts readers off in one place and leaves you somewhere else that seems disparate and extreme. You really have no idea what you're reading and why you're reading it until the end. The gist is that a woman named Yeong-hye, an ordinary housewife in Seoul, has a dream about acts of violence and human cruelty that disturbs her so intensely that she decides to quit eating meat the very next day. No one in her circle takes this well, and as a result her marriage and her family falls apart. But Yeong-hye's vegetarianism (technically veganism) is a symptom for something much more profound.

Her seemingly innocuous lifestyle choice has an unexpectedly disastrous domino effect. Yeong-hye's family tries to force her to eat meat again, which pushes her to the brink and leads her to attempt suicide. After recovering in a hospital, her husband divorces her but then her sister's husband's empathy toward Yeong-hye forces him to confront his long-standing attraction to her. He is then emboldened to create the video art piece that's been haunting his imagination, making Yeong-hye his muse. But after her sister In-hye catches them together, the brother-in-law skips town, the rest of the family severs ties, and Yeong-hye is institutionalized again, leaving only In-hye to take care of her.

The Vegetarian contains three parts, all of which concern Yeong-hye but none of which consult her: the first from her husband's perspective, the second from her brother-in-law's, and the last from her sister's. We only hear directly from Yeong-hye in her husband's section, where she occasionally recollects her dreams or wearily confronts her condition. Everything else we learn about Yeong-hye is essentially hearsay. And of course, each person views her differently based on their relationship with her. Her husband (Mr. Cheong, we never learn his first name), who views his wife as merely a caretaker and accessory, cares more about his reputation and how he's inconvenienced than for Yeong-hye's wellbeing. Her brother-in-law thinks he means well but his benevolence toward her is only a vehicle for his own sexual, emotional and artistic fulfillment. Her sister thinks that she's always been protecting Yeong-hye but keeps her sister conveniently distanced from her day-to-day life, as both her forgiveness and endurance have limits.

What we don't learn until later is that Yeong-hye's behavior is a response to the mistreatment that she's endured throughout her life, some of which is specific to her own experiences, some of which is common to many women who also happen to be daughters, wives, and little sisters. The bloody, animalistic nightmares cause her to reject all aspects of consumption and preying upon others that seem to be innately human; she's a hurt person who's had enough, and is desperate to avoid causing harm to any creatures. Eventually this transforms into her trying to un-become human, believing that if she denies herself enough things (eating meat, wearing clothes, talking, eating or drinking anything at all) she can transcend her human nature and eventually become a tree. Though she wastes away and treatment ceases to be effective, in her mind the death she's heading toward is not failure, but freedom. Yeong-hye has been victimized her whole life, but In-hye doesn't notice the toll it has taken on her sister until eventually Yeong-hye draws so far inside herself that no one can reach her.

Though Yeong-hye's gradual physical and psychological breakdown is the conduit for this story, her husband, her sister, and her sister's husband all feel something within themselves that's liable to break out or take control of them. Consequently, the themes of the three sections apply not just to Yeong-hye, but all of them. Part one deals with internal rage and the potential for violence, bubbling just under the service. Part two deals with the acting out and circumstances of breaking with convention, of indulging in unrestrained passion. And part three deals with the necessity to reckon with (perhaps even submit to) one's despair and pain, which brings a distorted sense of peace. Yeong-hye goes from a repressed beast, to a blooming flower, to a withering tree, and none of the people close to her are left untouched.


"Can only trust my breasts now. I like my breasts, nothing can be killed by them. Hand, foot, tongue, gaze, all weapons from which nothing is safe. But not my breasts. With my round breasts, I'm okay. Still okay. So why do they keep shrinking? Not even round anymore. Why? Why am I changing like this? Why are my edges all sharpening―what am I going to gouge?" (41).

"Never before had he set eyes on such a body, a body that said so much and yet was no more than itself" (95).