"You were one of my favorites" - GET OUT

Having previously decided that I would absolutely NOT go see this film (didn't want to go out of my way to feel more ill-at-ease then I generally do already), I read the Wikipedia summary so I could know what I was missing out on. Figured I'd catch it whenever it became available on cable. But then, within a week after the film opened, two of my favorite podcasts released episodes discussing about the film (see here and here). And after listening to both of those episodes over again, last week I had a last-minute change of heart and went to two different cinemas to find a showing that wasn't sold out. Jordan Peele has said on numerous occasions that this movie is meant to be enjoyed as part of a theatre audience, and now I totally get it.


Seen Friday, March 3rd: Get Out


Chris, a black man, goes with his white girlfriend Rose to meet her parents for the first time. Rose's parents and their friends practically trip over themselves to exhibit that they're "the good ones" so to speak: totally cultured, trustworthy, and definitely not racist. Little does Chris know, he's being set up for something more sinister and true to American life than he could've ever imagined.

"Just because you're invited, doesn't mean you're welcome." 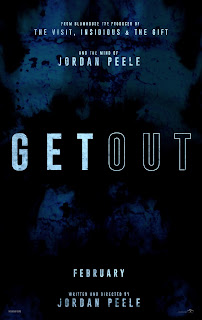 What I really like about this film: That scene where Chris is at Rose's parents' annual party, and as he goes upstairs, all the guests immediately silence their chatter and stare at the ceiling, tracing his movement with their eyes. Gave me chills! Chris was almost never not under surveillance.

And Georgina! Betty Gabriel smashed that role to pieces with such control that you almost forget to be disappointed that she's one of only two black female characters who appear in the film! In that "No... No. Nononononono" scene she manages to play desperately composed and heartbreakingly unhinged at the exact same time, and I'm still trying to figure it out.

Listen, I went in knowing how it was going to end. None of the twists surprised me. And as a self-acknowledged cheapskate, I don't go to the movies often. But this one's seriously got me considering going to see it a second time just so I can see what other clues, hints, and references I missed!

What I don't like about this film: Absolutely nothing. I mentioned the black woman issue because I noticed it after viewing Get Out and thinking about it a bit. But to be honest, I'd listened to, read, and watched so much about Peele's process and what he was aiming to accomplish with this film that it doesn't bother me as much as it probably should.

Would I recommend it?: Is water wet? As with Zootopia (I'm serious! This is not a joke here!), Get Out needs to be required viewing for any sort of cultural literacy or "how to consider others and be a decent human being" training.
Posted by Deela (Danielle G.) at 4:19 PM