I'm back again with another J-drama review! And it didn't take me over a year to finish my selections this time⁠—it only took me five months, which is progress, believe it or not! Since my last J-drama review I've watched four dramas from 2019 and one from 2020, mostly with English subs. Part 1 of this review focuses on the three shortest shows, including a surprise standout from Netflix. Each of the following has fewer than the average 10-12 episodes, and/or has episodes that run shorter than the average 45-60 minutes.
東京二十三区女 (Tokyo Nijuusan-ku Onna/Tokyo 23-ku Onna/Women of Tokyo's 23 Wards) - WOWOW/2019 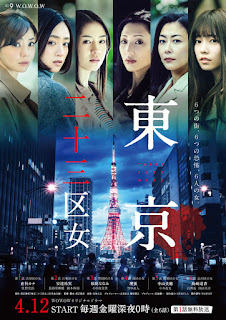 I believe it was the woman-centered premise and the horror story angle that made me watch this show. Watching each episode is like reading a scary short story that has a twist at the end, though the twists were never as frightening as I hoped. Occasionally predictable, creepy or unsettling at most, but not frightening. It would be easy to simply declare that this show is boring. However, I think 'Tokyo 23-ku Onna' does put a worthwhile spin on the theme of past actions having consequences in the present: even a megacity can be cursed. The show manages to cultivate a consistent mixture of dread and curiosity while playing with viewers' expectations of how each story will end, which still makes for an interesting collection of tales.
If you're interested in anthology series, ghost stories, folk tales, and/or the history of Tokyo, then I'd say 'Tokyo 23-ku Onna' is worth it for curiosity's sake. But it's certainly not a show that I have the need or desire to watch again.
東京独身男子 (Tokyo Dokushin Danshi/Tokyo Bachelors) - TV Asahi/2019
Something about the tone and story of this drama shifted, and I'm not sure if it was intentional or if something happened during the production process along the way. From the first episode it seems like the show will mainly focus on Taro's quest to either move on from his ex-girlfriend or somehow get her to choose him again, with his friends offering moral support and comedic relief. But then the show spends significant time fleshing out each of the men's love lives and work/life issues, not just Taro's. The storyline with Taro's ex ends halfway through the show, and the show becomes more about these three best friends navigating the turning points in their lives as 30-somethings and 40-somethings. In short, the romance and comedy aspects fade slightly to make way for something more serious and contemplative. Which I didn't dislike, but again, it's a noticeable shift. As the trio remark to each other, this time in their lives feels like their very last chance to make huge changes before things are presumably set in stone forever on the road to future retirement. (Of course, nothing is ever completely set in stone, but you get what I'm saying).
What makes this show really stand out is the genuine and affectionate friendship between Taro, Iwakura, and Miyoshi. They talk about everything, they help each other with their problems, they jokingly make fun of each other, they even get health-checkups together! If you want to watch something sleek and modern about professional people in Tokyo, centering male friendship in a way that's not overwhelmingly "bro"-like, then this show is for you.
FOLLOWERS - Netflix/2020
I watched this show completely on a whim; it wasn't originally part of this roster of J-dramas that I was in the process of finishing. One of my favorite podcasts called Jinjja Cha said they would review it a few months ago, so I added 'Followers' to my running list of things to watch, but then forgot all about it. And then in July, I randomly remembered the show and decided to give it a try. I became so engrossed in it that I finished the show in 24 hours (split over two days, but you get what I mean). Part of what got me hooked is that I recognized similarities to director Mika Ninagawa's previous work (2012 film 'Helter Skelter') before even realizing that she's the director of 'Followers'. It's all in the set design, costumes, and lighting. Bright yet shadowy, ornate edging on gaudy/chaotic, sexy yet foreboding, lots of reds and purples and yellows and lighting in unusual colors. However, 'Followers' goes for a much more hopeful and millennial twenty-something feel than 'Helter Skelter', so there are pops of pastel as well. Sawajiri Erika (who played main character Ririko in 'Helter Skelter') even makes a cameo in the first episode, and one of the main characters of 'Followers' named Sayo has a career breakdown (accompanied by an emotional breakdown) that directly echoes that of Ririko in the 2012 film. So as woman-centered stories about people trying to make it or maintain longevity in the Japanese entertainment/fashion industry, the connections between 'Followers' and 'Helter Skelter' are incredibly clear! My spidey senses, so to speak, were tingling and I kept thinking, All of this feels very familiar, hmm... until I looked at the credits at the end of the first episode, googled Mika Ninagawa, and then it all made sense. That was a very pleasant surprise and made me appreciate the show all the more.
Rimi seems so intrigued by Natsume and also, I assume, helps Natsume get taken under the wing of Rimi's similarly well-established friends. (Natsume gets a makeover, access to makeup and fashion events, and a new agent seemingly overnight.) Because of this, I thought that Rimi would take Natsume under her wing as well, and 'Followers' would focus on their mentor-mentee relationship. Not so. Although Rimi and Natsume are aware of each other, they only really interact at the very beginning and very end of the series, and the time in between focuses on their own respective career and relationship journeys.
Also, shoutout to Nakatani Miki and Itaya Yuka! I thought Nakatani Miki looked vaguely familiar, and then I looked up the cast and realized that she'd the played seasoned, somewhat rigid, manipulative literary queen taking advantage of fresh blood in 'Ghostwriter'. What a turnaround! She seems so much younger and more energetic as Rimi, and the contrast between these two characters only serves to underscore what a versatile actress she is. As for Itaya Yuka ('Cecile no Mokuromi'), she's an actress whom I'm always pleased to see. No matter what I've seen her in, I've never been disappointed with her performance.
Got two more J-dramas to tell y'all about, so be sure to read part 2 of this review to find out which show is my favorite overall!
Posted by Deela (Danielle G.) at 2:13 PM