For my final project in one of my classes I'm analyzing two tribute/charity albums produced by the Red Hot Organization that are dedicated to Fela Kuti.  Fela Kuti did many things and is known today by many titles, so I'll just say that he was a Nigerian composer, musician, and political activist who is credited with founding the music genre known as "Afrobeat". The albums dedicated to him are  titled Red Hot + Riot (2002) and Red Hot + Fela (2013). 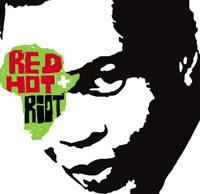 Back when I was familiarizing myself with Fela's music, before I'd even gotten my hands on the Red Hot albums, "Trouble Sleep Yanga Wake Am" struck me so unexpectedly. Its sadness touches me in a very deep place, and it's simply mesmerizing. Not only that, but this song's groove is just so smooth. There's a certain attitude, a coolness even, that gives the song an easygoing feel even amidst its sad lyrics. It creates a space for you to grieve, groove, and heal all at the same time. The tune's infectious, and though I'm still new to his work, I must say that this is my absolute favorite Fela Kuti song.

I'm still learning how to understand pidgin English lyrics, but from what I've gathered this song's message is like the idiom "no rest for the weary". Everyday people are just trying to get by, live good lives, and make the best of what they have, but authorities and people who have power over them seem to have no sympathy and won't leave them alone.

There's a version of the song on both Red Hot album's, but I think the more recent one sounds more like the original. It also emotionally affected me in a similar way. Below is Fela's original from 1972, and My Morning Jacket/Merrill Garbus/Brittany Howard's rendition from 2013. Enjoy!

Email ThisBlogThis!Share to TwitterShare to FacebookShare to Pinterest
Labels: On Repeat