Looks like I've been hitting upon a couple of duds lately. I suppose it happens to all of us avid readers, especially to those of us who invariably must finish a book once we've started it. Today I've got one book that I didn't care very much for, and another that I liked well enough at first but which I appreciate even more now after having sat with it for a bit.

Tears of the Giraffe (The No. 1 Ladies' Detective Agency #2) by Alexander McCall Smith 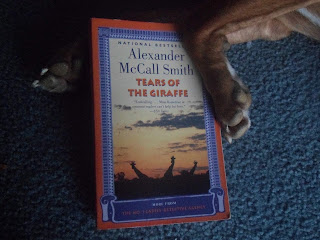 I read the first book in this series two years ago and recently found the third at a used book sale, but I decided to buy the second just in case I might miss something in between. Turns out I could've skipped this one altogether! Tears of the Giraffe isn't nearly as eventful as its predecessor, where numerous mysteries were included in order to establish Mma Ramotswe as a detective and set a precedent for how she approaches and solves her cases. The sequel, on the other hand, contains only two mysteries that each require minimal effort and ingenuity: a local man who suspects his wife of having an affair, and a white American woman who seeks closure regarding  her college-aged son who had disappeared 10 years prior. The rest is pretty inconsequential. Mma Ramotswe's fiancé Mr. J.L.B Matekoni adopts a pair of siblings from the orphanage that he does odd jobs for, basically electing her for motherhood without her input. But when she discovers this, they discuss it briefly once, and then she takes the kids to her house for lunch and a tour of their new home as if everything has been resolved. Which does not read as believable to me at all. As a woman who knows and does what she wants, I had expected Mma Ramotswe to make more of an issue of it (I know I would have!). And then there's Mr. J.L.B Matekoni's wretchedly lazy maid on whom we spend a considerable amount of time but who seems to serve little purpose other than comic relief, and even she's more irritating than comic. My hope is that Tears of the Giraffe was written as a breather, setting up some of the more mundane details in order to prepare for something more engaging in the third book. I wasn't planning to read beyond that one anyway, but we'll see if I'm correct.


"'How do we know that Gaborone will still be there in fifty years' time? Have the ants not got their plans for Gaborone as well?' Mma Ramotswe smiled. It was a good way of putting it. All our human endeavours are like that, she reflected, and it is only because we are too ignorant to realize it, or are too forgetful to remember it, that we have the confidence to build something that is meant to last. Would the No. 1 Ladies' Detective Agency be remembered in twenty years' time? Or Tlokweng Road Speedy Motors? Probably not, but then did it matter all that much?" (95-96). 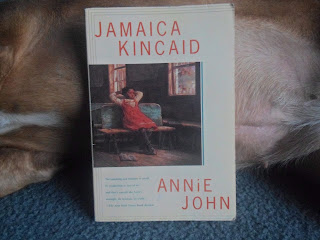 As a student I had the great fortune of being assigned to read Jamaica Kincaide's "Upon Seeing England For the First Time" essay in high school, and later on to read her novel A Small Place as a sophomore year in college. So when I spotted Annie John at the aforementioned used book sale, I felt compelled to snatch it up too! In keeping with the imperialism-related focus of most of Kincaid's material, this novel features the titular young woman narrating her childhood and adolescence in Antigua while it was still a British colony. Given that the novel is written in past tense, we are led to believe that Annie John is at least 17 years old if not completely grown at the time of writing, since that is the age when she leaves the Caribbean island for England, with no intention of returning.

Of the two Kincaid books that I've now read, I wouldn't say that Annie John is my favorite. Nonetheless, it is so evocative of the wonder, mischief, and agony of youth that I wouldn't be in a rush to discard it. Annie John's gradually tempestuous relationship with her mother affected me the most, as someone who is close to her own mom. While Annie John adores and is inseparable from her mother as a little one, as a teenager she wants nothing more than to get away from her mother (and to a extent, everything in relation to her life on the island). But Kincaid doesn't allow the reader to dismiss this behavior as typical teenage moodiness. In fact, Annie John's enmity begins with what she perceives to be betrayal. As she enters puberty, her mom becomes stricter with her and reduces the physical displays of affection they once shared. Her mom is simply trying to raise her daughter to be a proper young lady (whatever that means for that particular place and time), but because she doesn't explain the "why" of all this to her daughter, Annie John feels like she's being punished and can't figure out what she's done wrong. Her conclusion is that her mom doesn't love her anymore, and a hurt and confused Annie John strives to best her mother in a spiteful competition of who can show the least love. She reveals less of her life to her mom, gives icier and more curt responses to her mom's questions, pursues more mischief, tells more untruths. But as much as she claims to abhor her parents, she winds  up following in their path. Her mother left her native Dominica for Antigua, and her father was on his own following the death of the grandmother who had raised him. They both obtained independence and were thrust into adulthood due to tumultuous circumstances in their teens, and in attempting to distance herself from her them, Annie John actually becomes resembles them all the more. If you enjoy reading Caribbean literature and stories of teen angst outside of the mainstream YA genre, try Annie John.


"I envied the way the air seemed to part for them, freeing itself of any obstacle so that they wouldn't have to make an effort. Now I could see that the air just parted itself quickly so that it wouldn't have to bear their company for long. For what a dull bunch they were! They had no different ideas of how to be in the world; they certainly didn't think that the world was a strange place to be caught living in" (90).