"The Ocean Chose You!" - Moana

Moana is for Pacific Islanders. Indigenous people. Melanated populations and their ancestors. Protectors of the earth. Healers. Mamas, Mama's mamas, and Mama's Mama's mamas. Seekers. Adventurers. Girls on fire. People who know there's something more inside them and that they have to see it through, even if they don't know why or how.  Do your spirit a favor and go see this movie!


When vegetation starts dying and fish become scarce for the island of Motunui, the villagers begin to fear for their survival. The chief's daughter Moana is then inspired by her grandmother to sail the ocean and make the demi-god Maui restore balance to nature by returning the power of creation that he'd stolen to its rightful keeper. That is, to Te Fiti, mother goddess of the earth. With the ocean's help, Maui's supernatural abilities, and her ancestors' guidance, Moana must save her island before it's too late.

"The ocean is calling." 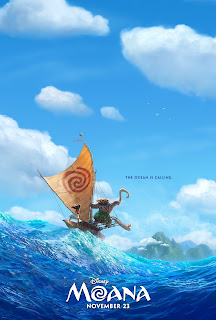 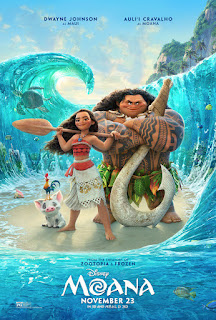 What I really like about this film: Reverence for ancestors! Reverence for elders! Do you need guidance? Do you need a reminder of where you come from and what your purpose is? Then consult those who came before you, and listen to them!

Reverence for maternal figures and spirits! Especially Moana's grandmother Tala, the ocean (yes, the ocean is its own character in this movie!), and mother goddess Te Fiti. I've never had a grandmother but I was deeply moved by what Moana and Tala share, which is something that's unspeakably precious, honest, and authentic in a mischievous way. Do you need encouragement? Do you need someone to see and affirm in you what no one else does? Do you need someone to love you back to life?  Then seek out that mama, that grandmama, that auntie, that sister, that motherly figure in your life, and listen to them!

And my Lord, there are such beautiful people all up and through this movie! Such unambiguously brown skin, such full lips, such broad noses, such glorious dark curls and waves. Variations of phrases including "We know who we are", "my/our people", "this/our island" are prevalent in the film's dialogue, and this is neither coincidental nor redundant. Moana is not only an adventure story led by a headstrong young girl. It is also a bold statement about a culture honoring its origins, cherishing its natural resources, and protecting its beloved home so that this home can continue to love it back.

Also, I don't think I've ever witnessed a feat of animation as awe-inducing as the scene where Te Fiti comes back to life in her true form. The goddess is manifested as a gigantic and lushly green woman-shaped island made of trees, plants, vines, and flowers. She is royal and superior to all, and at the same time is tender and graceful, communicating with her facial expressions and the movement of her body. She may very well be the most magnificent being that I have ever seen appear on screen.


What I don't like about this film: I didn't really care for Moana's main song ("How Far I'll Go"), but I LOVED "We Know the Way" and Maui's song, "You're Welcome" (especially the soundtrack version with Jordan Fisher and Lin Manuel Miranda). I had no idea that Dwayne "The Rock" Johnson could carry a tune, and the lyrics, delivery, and cheekily arrogant attitude of the song are classic Lin Manuel. Oh and I almost forgot! "Shiny", a trippy song sung by an evil crab named Tamatoa (Flight of the Conchord's Jemaine Clement) is oddly pleasing to the ear given its murderous intentions.


Would I recommend it?: YES! YES YES YES! This film is such a victory for brown peoples everywhere, but especially Pacific Islanders because I don't think we've ever had a film of this scale that centers them the way Moana does. Island characters, island mythology, islanders and other people of color voicing most of the leads and singing most of the music. Disney has produced many masterpieces but this is one of the most unique, humbling, and inspiring ones.
Posted by Deela at 7:05 PM