BOOKS! (The Rapture of Canaan)


Another used book sale find. You know when you see a book, and after examining it you’re pretty sure you’ll find it only marginally interesting, but you decide to buy it anyway, and you wind up loving it more than any other book you’ve read in the past six months? Well I loved this one so much that I had to write about it all by itself.

The Rapture of Canaan by Sheri Reynolds 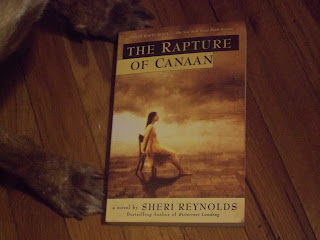 In an unspecified U.S. state somewhere south of Virginia is a rigid, tobacco-farming, fundamentalist Christian commune, whose epicenter is the Church of Fire and Brimstone and God’s Almighty Baptizing Wind. Its leader, affectionately known as “Grandpa Herman” had been so shaken by his time serving in World War II, that he dedicated his life to Christ and set about creating a church and community which he’d run the same way he thought God ran Heaven.  But what he created was a fearful and isolated community of cruel obedience and sameness, where every member is related by blood or marriage, and Grandpa Herman is pastor, judge, and financial manager.

Growing up in “the community” is our narrator Ninah (nigh-nuh), an adolescent girl who realizes early on that she doesn’t quite fit in amongst her fellows who happily live by the rules and fiercely defend their way of life. She doesn’t like being indistinguishable in physical appearance from all the other female members. She resents being expected to act or not act a certain way just because she’s a girl. She’s skeptical of the theatrical wailing and crying and speaking in tongues that occurs every Sunday. And she’s got so many questions and opinions that, at first, she can bring to no one but Nanna. Grandpa Herman’s wife abides by her husband because she loves him, but internally she’s the most independent thinker at Fire and Brimstone. To a certain extent, this granddaughter and grandmother are each other’s confidants.

And so, when Ninah and her nephew-in-law James fall for each other (he’s Ninah’s eldest sister’s husband’s son from a different marriage; not incestuous but is still awkward), Nanna is her sole advocate. She arranges for the two youths to become prayer partners, allotted an amount of daily (and rare) private time together which is supposed to bring them closer to Jesus and hopefully prepare them for courting and marriage in the future. What they actually do is get to know each other in the biblical sense. In the choir loft, in the tobacco fields, behind barns, wherever they can. Eventually and unsurprisingly, Ninah winds up pregnant at the tender age of 15.

Though the story focuses on Ninah, James is actually the most tragic and one of the most fascinating characters in this novel.  He’s only one year older than Ninah, and he challenges much of Fire and Brimstone’s ideologies just like Ninah does. But the boy is so terribly afraid and confused that he flips between tolerance and torment on the daily. In fact, he’s so terrified of being rejected by God and tortured or killed (literally) by the community for fornicating and impregnating Ninah, that before news of the baby gets out to anyone else, he drowns himself in a nearby pond.

What follows is a whirlwind that I won’t spoil for you, but basically Ninah goes from being ostracized as a slut to being revered as the mother of the new Messiah, and she wields this fantasy to her advantage. Of course, The Rapture of Canaan is a tale of coming of age and the fallout from a teenage love affair, but under the surface it’s also the journey of a young woman grasping at self-determination in almost unconscionable conditions. She wants to honor what makes people (including herself) human without scorning them for it, and she questions what she’s been taught not to disprove her faith, but in order to make it more sincere.

One last point worthy of making is that the novel poses sexual intercourse as a form of prayer or worship, and I actually greatly appreciate that idea. On one hand this logic functions as a convenient and disingenuous way for Ninah and James to excuse themselves for engaging in the same thing that they’ve been taught to disparage others for. But on the other hand, it makes some sense. For them, sex is a way to experience Jesus through each other, and they’re not the only characters in the book who attest to feeling closer to God or understanding him better through such physical intimacy. As a Christian who wasn’t raised to view sex as evil but knows plenty of others who have, I think Reynolds proposes a perspective that all believers should consider. If you do question or have ever questioned faith, if you are in any way intrigued by the people behind religious cults and fundamentalism, and if you enjoy reading about female characters who are saved by their own stubbornness, then read The Rapture of Canaan. Undoubtedly my favorite book that I’ve read this year, next to An Untamed State by Roxane Gay, and Why We Came to The City by Kristopher Jansma.


“For a second, I wanted to knock the stool right from under his self-righteous feet. Then I reminded myself not to fight evil with evil. And then I did it anyway” (105).

“Nobody even tried to tell her that he was simply normal―because to Laura, that would have been like saying he was retarded. And I wanted to shake her until she broke and all the stupidness jingled out because she just couldn’t understand that what was normal was miraculous enough” (270).