BOOKS! (Why We Came to the City) - proof

This is the second-to-last uncorrected proof that I got from the bookstore break room, and it seemed mildly interesting. I'd wanted this book enough to take it for myself, but truthfully I wasn't all that excited to crack it open. When I looked it over  my first thought was, Great. Yet another work created about New York City, focusing exclusively on hip white 20-somethings. Woo. hoo. How. original. I almost stopped reading it because I assumed it'd be uninteresting, but this novel surprised me! 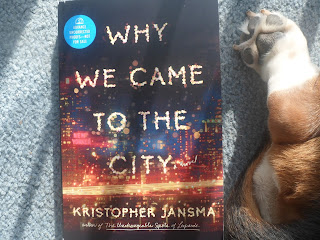 My assumption when skimming the title and synopsis was that I'd be reading about this group of college friends and NYC transplants clumsily but earnestly following their dreams, while conquering their respective quarter-life crises during the Great Recession. The book is even punctuated by poetic interludes  ("Why We Came to the City", "Why We Left the City", and "The City That Is") about New York City and how living there has changed them. But this novel is also a little more serious than that. Readers are immersed in this group's long-standing friendship, and how each person's character, priorities, and disappointments are brought to the surface when they must collaborate to support one of them who is fighting cancer.

Part 1 introduces the characters and sets us up for this tragedy. We have Irene, an artist and assistant at an art gallery, with a suspicious spot under her left eye. We have her best girl friend Sara, a type-A editor and socialite. We have George, Irene's friend and Sara's boyfriend, an astronomer who likes to keep the peace. We have Jacob, George's poet bestie and the too-cool rebel of the group, known for his intelligent snark and strong opinions. And lastly there's William, an easygoing Korean-American investment banker and the only native New Yorker in this ensemble. He was a vague acquaintance of the group in college and is still madly in love with Irene after all this time, despite not knowing her or any of the friends that well. Irene is the one that the other four have to rally around, and let me tell you. What sold me on this book is how Jansma writes about her passing. He so craftily and delicately weaves two moments together that we're not sure which one is real until the end. First he has us follow Irene as she escapes the hospital, refusing to die there, and walks freely through the city accompanied by winds. And then he splices that with scenes of her friends being called to the hospital to decide whether or not to take her off life support, revealing that Irene is actually in a coma. And rather than following Irene's escape, we've actually been walking with her through the last moments of her life, in her mind.

Part 2 Gives each of the remaining characters a chapter to meander through the year and some change that follow Irene's passing. I won't say any more than that; I feel like I've already given away a lot. What I will say is that as much as Sara, George, Jacob, and William loved Irene and as close as they'd become, turns out there was a lot they didn't know about her. Like where she came from. Who and where her family was, if she even had any. Her real name. She carried those secrets with her to the grave. As settled as she seemed to be, as hard as she loved the people around her, she was a drifter who belonged to no one. But what's redeeming about all this is that her friends loved her back so fiercely that they didn't feel the need to ask too many questions. And no one in the group can completely get over her once she's gone.

So I would say that Why We Came to the City is more a novel about friendship more than anything else. There's the cancer subplot and the relentless pressure of the quarter-life crisis. There's frequent emphasis on the meaning and function art, poetry, literature. But it's Irene and what she means to each of her friends that allows them to pull together when they need to, and to keep moving forward when it's time to do so. I didn't have high expectations, but this is really a beautiful book. At least give it a good flip-through once it's released!


"William, you are a person! You possess, within you, a personality. A personality that can─no, which must─be expressed in the things that surround you!...They mean that you aren't a page twelve, William Cho!" (89).

"and I guess it sucks that it's always going to be a little harder for you than for other people, and you'll have to stay on your medication, and sometimes you're still going to see a homeless guy on the street or something and it's going to break you heart, and you'll want to crawl under a rock somewhere and hide everything good that you've got to offer from the world because it's going to seem like the world doesn't deserve it, but I promise it does─" (308-9).