BOOKS! (And After Many Days) - proof

This book is the last advance reader's copy that I found up for grabs in the bookstore break room, and so with this review comes the symbolic end to an era that officially ended almost two months ago. Using a family tragedy as a vehicle for examining social strife, this novel beckons readers to revisit the violence and political upheaval of 1990s Nigeria. 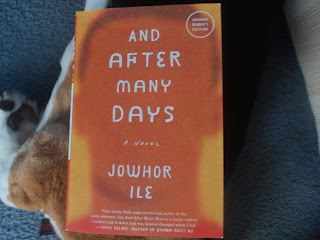 Paul is the eldest of three children in the middle class Utu household. One day in September 1995, he steps out of their house in Port Harcourt, Nigeria and never returns.Though the central conflict is this missing 17-year-old, And After Many Days is neither a crime novel nor a mystery novel. Rather than focusing on his family's efforts to find him, Jowhor Ile communicates the weight and distress of Paul's absence by immersing us in the life he and his family shared before he disappeared. And this is all told from the point of view of Ajie, the youngest child and the last person in the family that Paul talked to before he left the house for the last time. Ajie is greatly attached to his family, but his ideas don't always match theirs and he resents not being recognized as an individual more often.

Through Ajie's eyes we make a visit to the family village of Ogibah, which, more than three decades after independence from Britain, has to contend with big business filling colonial shoes. Relatives and fellows there constantly clash with an oil company that's destroying the Ogibah way of life through construction, land seizure, pollution, and bribes used to weaken local morale and resistance. Furthermore, the village people have little recourse when the company has the military-led government and the police on their side. In the cities, universities are shut down intermittently as students and faculty protest, often being intimidated or beaten back into place by police. People, especially young people, are disappearing. Those who resist, or call officials out on their corruption and hypocrisy, or complain too vocally, or are in the wrong place at the wrong time, or are just minding their own business but are still somehow a threat to or "in the way" of the powers that be. People are disappearing for any reason and no reason at all, and Paul is one of those people.

While he doesn't realize it at first, in the midst of these changing times Ajie is grappling with the loss of not only his brother, but also of society as he knows it to be. He is already unsettled by nature, and the events he witnesses only make him more so.  And After Many Days takes up the past, and this backward-looking story is framed by Ajie's latent rage. Ajie's angry about being last on the pecking order of his siblings, about classmates thinking they can punk him, about being punished for asking questions instead of receiving answers, about not being seen or heard, and about having what's most precious to him taken away and not being able to do anything about it. As he awaits his beloved brother's return, Ajie refuses to relent and never stops searching for him.

"But whatever there was to know about desire and its costs was beyond Ajie then. He was at that time completely passionate and completely pure. He imagined himself, his brother, and his sister to be people who would shoot into the world and burn, fiery arrows set free by their parents from their home here at number 11. They would love greatly and do useful things. Bibi would become rich and important and build houses and hospitals for the poor. Paul would simply change the world. But what would that cost?" (78).