I have Crissle and Kid Fury from The Read to thank for recommending this book to me and thousands of other listeners. I've been an artist-in-hiding for most of my life, and for the past few months I've been fighting myself especially hard to keep things that way. Even though that's not really what I want; it's just been familiar for so long. But anywho. The War of Art is a manual for artists, or anyone who struggles to start and be consistent with things that are important to them but which are also new and potentially terrifying. Steven Pressfield (author of The Legend of Bagger Vance) identifies why we stop ourselves from pursuing said ventures, and then uses his understanding of what professional artists do as a basis to advise us on how to overcome internal obstacles.


The War of Art: Break Through the Blocks and Win Your Inner Creative Battles by Steven Pressfield 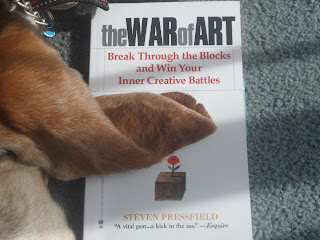 This book is divided into three parts ("books"), and Book One delves into capital-R Resistance and the myriad of ways in which it fools and defeats us. Pressfield defines Resistance as an inner force that keeps us from taking the action needed in order to do what each of us has been placed on Earth to do. It chokes our genius and makes it seem easier or less painful not to do the work. It is fed by fear and manifests itself in the form of procrastination, avoidance, self-doubt, and excuses. One must not fall into its trap. However, the redeeming aspect of this is that we can use fears or doubts as indicators. Whatever we put off doing or avoid showing to others, yet can't stop thinking about, must be extremely important to us. In that same vein, we must have something special if we're fighting so hard to protect it and make sure it's great. All the more reason to create things and share them!

Book Two is all about what distinguishes professionals from amateurs, which boils down to mindset and discipline. Pros create things principally because they can't not do it, not because they're expecting to get something out of it or become famous. And yet, while their particular art or expertise is essential to who they are, it is not all that they are. Pros push past internal Resistance, don't let the potential for criticism paralyze or control them, and they develop a sense of humor about failure. The bottom line is that nothing will happen if people don't sit down to do the work and commit to excelling at their craft. The professional understands this well, whereas the amateur hasn't quite grasped this yet.

Finally, after having set forth the major problem and offsetting that with the ideal that he thinks artists should aim for, Pressfield uses Book Three to discuss tactics to overcome the former and attain the latter. First, artists have to own what their specialty is and what they want to use it for, and use this self-awareness to motivate them to create, rather than focusing on what will sell or what an audience might like. Second, according to Pressfield, creation comes from a higher realm; it is a gift given to each person in order for them to produce it in earthly form and share it with the world. As such, in order to create according to one's purpose, he or she must invoke whatever higher power or higher intelligence (God, angels, ancestors, one's Muse), necessary to help them along. It may sound hippy-dippy, but listen. If you receive something that's one-of-a-kind from someone and they made that thing exclusively for you, wouldn't it make sense to consult them about how to use that gift?

The most important lesson I take from The War of Art is that, while it may seem painful or difficult, starting something is the most important hurdle. Don't worry about how much you'll get done or whether what you make will be good at first. START! Just start! Inspiration will come! When you're already in action doing what you're meant to do, inspiration and all kinds of unexpected good things will come to you! Personally, I feel like this book called me out on a lot of things, and I see why comedian/writer/speaker/media personalities like Kid Fury and Crissle spoke so highly of it. Thank you for your contribution, Steven Pressfield. This might be a book that I read every year! If you're having trouble starting or finishing something you've always wanted to do and would like someone who understands to give it to you straight, I'd definitely recommend The War of Art.


"The professional cannot allow the actions of others to define his reality. Tomorrow morning the critic will be gone, but the writer will still be there facing the blank page. Nothing matters but that he keep working" (92).

"By Blake's model, as I understand it, it's as though the Fifth Symphony existed already in that higher sphere, before Beethoven sat down and played dah-dah-dah-DUM. The catch was this: The work existed only as potential... It needed someone. It needed a corporeal being, a human, an artist [to] bring it into being on this material plane. So the Muse whispered in Beethoven's ear. Maybe she hummed a few bars into a million other ears. But no one else heard her. Only Beethoven got it. He brought it forth" (117).