Here goes another book recommendation from a podcast, this time from the hosts of Mostly Lit. After the film adaptation of Twelve Years a Slave made its rounds four years ago, I resolved for my own sanity to not watch another slave movie. I've been hearing and learning about the trials of our ancestors constantly since I was a child, and I just couldn't stomach another movie that would tear my heart to shreds while still allowing white people to feel better about themselves and ultimately learn nothing ("Isn't it so good that the times aren't like that anymore," blahdeblah, etc). Thankfully, I haven't sworn off books about slavery at all. Homegoing is one of my favorites that I've read this year, but I needed some time to sit with it before writing about it. 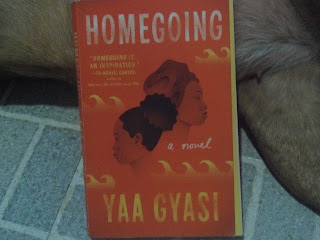 Loss and fire and motherhood and sisterhood and womanhood and bonds and blackness and blood.

Two women in the Gold Coast (present-day Ghana) are both victims of British colonialism and the slave trade. Born of the same mother, they are half-sisters but never meet each other or even learn each other's names. From their adolescent years both of their lives are framed by the whims of white men, in a comparable though not equivalent dynamic to house slave and field slave.

Effia, the elder sister born in a Fante family, is married off to the British governor of Cape Castle, becoming the "wench" of the man who controls the export of slaves from Ghana. She can move around without restriction and is even able to visit her home village, though she is no longer welcome there. Effia lives a life of luxury in the castle, underneath which sits the dungeon where hundreds of slaves are crammed, awaiting shipment. Unbeknownst to her, her sister is one such slave. Esi, the younger sister born in an Asante family, is captured as a slave and traded to the British after her father's tribal war exploits backfire on him. She lives in the slave dungeon underneath Cape Castle with no space, no end of tears, and no sunlight. She is scarcely fed, and is brutalized by soldiers who guard the dungeon. She's even molested by Effia's husband before being packed onto a ship bound for the American South.

The rest of the book traces each of these two women's branches of their family tree, down to their respective 4th-great grandchildren in current times. Each chapter focuses on a specific descendant during a specific period of Ghanaian colonial/post-colonial history (Effia's descendants) or Black American history (Esi's descendants). Even after having finished this novel weeks ago, the chapter that sticks with me most is that of Willie, Esi's great-great granddaughter. Willie moves with her mixed husband and their son from Alabama to Harlem during the Great Migration. Due to racism (yes, even in The Big Apple!) and insecurities about his manhood, her husband is so focused on passing for white so that he can earn a better living for them, that he passes right out of Willie's life. Out of their home and out of Harlem, letting his white employers make a sexual spectacle out of Willie before leaving her and eventually starting a new family with a white woman. I don't know why this story bothers me so, but it does. Infuriating and tragic. I knew passing was (still is!) real, but I hadn't imagined that it was THAT real, and especially in New York City of all places.

Props are due to Yaa Gyasi for acknowledging Africans' culpability in the slave trade while also not shifting the onus away from the white people to whom the trade catered. Notions of the diaspora or Pan-Africanism hardly existed at that time, and so local warriors and slave traders saw capturing and selling other Africans as a way to get rich while subjugating rival tribes (Asante vs. Fante, for example), rather than as a means to send their own off to indescribable hell as non-human property in the New World. Furthermore, chattel slavery was a practice particular to the Americas that didn't have a cut-and-dry equivalent in Africa (at the very least, slaves in African hands were still considered human beings). This is all a lengthy discussion for another day, but Gyasi thankfully doesn't shy away from it.

To be completely honest, once I read the last line and closed the book, I came this close to crying. Thiiiis close. I've written before about how like most descendants of enslaved people in this country, I'm disconnected from my exact roots and don't know who my ancestors were or where they came from past a certain point. Not to project my experience onto Yaa Gyasi's, but in reading Homegoing I felt like I was also able to pay tribute to my own ancestors. To feel for them, mourn for them, take pride in them in a way that I hadn't before. The novel left me with a sense of despair, but also immense gratitude toward the people who survived and made my existence possible.


"'You cannot stick a knife in a goat and then say, Now I will remove my knife slowly, so let things be easy and clean, let there be no mess. There will always be blood'... They would just trade one type of shackles for another, trade physical ones that wrapped around wrists and ankles for the invisible ones that wrapped around the mind... The British had no intention of leaving Africa, even once the slave trade ended. They owned the Castle, and, though they had yet to speak it aloud, they intended to own the land as well" (93).

"There is evil in our lineage. There are people who have done wrong because they could not see the result of the wrong. They did not have these burned hands as a warning... it is like a fisherman casting a net into the water. He keeps only the one or two fish that he needs to feed himself and puts the rest in the water, thinking that their lives will go back to normal. No one forgets that they were once captive, even if they are now free" (242).