BOOKS! (Woman at Point Zero + Everyone's a Aliebn When Ur a Aliebn Too)

Both of these books were endorsed by media personalities that I follow either sporadically or actively. The first is a novel (or "creative nonfiction") which supposedly served as the inspiration for Ariana Grande's Dangerous Woman album and her single of the same name. The second is a storybook for adults that came highly recommended by Tracy from the Another Round podcast. 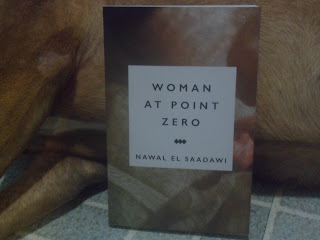 The most famous work of Egyptian feminist, activist, doctor, and literary giant Nawal El Saadawi, Woman at Point Zero is a fictionalized account of conversations she had with a female prisoner in 1974, days before the woman was executed for murder. El Saadawi visited the woman as part of her psychiatric research on Egyptian women, and was so profoundly affected by the woman's story that she wrote a book to memorialize her and the plight of women in the Arab world.The book is narrated mostly by the first-person voice of Firdaus, whose interactions with men over the course of her life take her through female circumcision, repeated sexual assault from a relative, abusive relationships, rape, prostitution, and finally, murder.

What I appreciate most about this book is how it explores sex work as both exploitative but also a source of autonomy. Though Firdaus is initially lured into selling her body, eventually she becomes her own boss, running her own life without anyone intercepting the money or telling her what to do. For a short while she attempts to be "respectable" and get an office job, but then witnesses how regular women toil with little in return, and after getting her heart broken she goes back into business for herself. And you know how she becomes most successful? By saying "no" to men. It's genius. It drives them wild because they can't stand to be rejected, and so she keeps naming her price higher and higher. Until one day a man, with better connections in higher places than her, shows up and demands to be her pimp simply because he can.

Certain lines are frequently repeated in the novel to emphasize the cyclical nature of events or feelings that occur in Firdaus' life. Searching people's eyes, waiting on first and second loves to reappear one last time, muted sensations of pleasure, abandoning her body and withdrawing within herself every time she's with a john. Firdaus goes out a criminal and is treated by male authorities like a deranged threat to society that must be disposed of, but she is free. Even if only in her mind, she has escaped the matrix of male-centered appeasement, degradation and servitude, and she is free.


"Who says murder does not require that a person be gentle?" (4).

"It was as though money was a shameful thing, made to be hidden, an object of sin which was forbidden to me and yet permissible for others, as though it had been made legitimate only for them" (91).

"That I knew nothing about patriotism, that my country had not only given me nothing, but had also taken away anything I might have had, including my honour and my dignity... the man from the police looked as though his moral pride was greatly shaken by what I had said. How could anyone be devoid of patriotic feeling? I felt like exploding with laughter at the ridiculous stance he was taking, the paradox he personified, his double moral standards. He wanted to take a prostitute to this important personality's bed, like any common pimp would do, and yet talk in dignified tones of patriotism and moral principals" (122-23).

"I want nothing. I hope for nothing. I fear nothing. Therefore I am free. For during life it is our wants, our hopes, our fears that enslave us" (137). 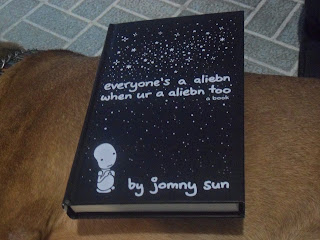 Jonathan "Jomny" Sun, a Canadian man who does everything (theater, architecture, design, engineering, comedy, everything!), wrote and illustrated this story about an alien sent to Earth to study humans and report his findings back to his fellow aliens. This alien's name is also Jomny, presumably pronounced "Johnny". On Earth he only meets animals, and assumes them to be humans.

There's a lonely tree. A workaholic beaver. A hedgehog striving to find himself as an artist. A love-starved bear. A sophisticated otter. An egg anxious about what it will be once it hatches. A flock of birds who worship the sun. A bunch of bees, one of which spells what he wants to say, instead of speaking in full sentences (a spelling bee, get it?). And nothing is a character. Literally nothing. Though we would otherwise consider it a void, a dauntingly bottomless concept, or empty space, nothingness is a character too.

And these animals (plus a couple inanimate/intangible objects) teach Jomny everything about humanity that he needs to know. Love, sadness. The uncertainty of pursuing goals or becoming something. The fact that mortality sucks because it's scary and unavoidable, but it's okay because everyone and everything dies, and in that sense none of us are alone. The idea that you should enjoy your sadness, because it's okay to feel sad and it won't last forever. Plus, being sad often means you've been lucky to have someone or something in your life worth missing. Aliebn is creative, it's funny, it's cute, the dialogue is simple but also sarcastic and deeply probing. Take an hour to read this book cover to cover, and then keep it close so you can read it again whenever you need a reminder that life may be a struggle, but that struggle is common.

"look. life is bad. everyones sad. we're all gona die. but i alredy bought this inflatable boumcy castle so are u gona take ur shoes off or wat"