BOOKS! (Ghana Must Go + We Are Never Meeting in Real Life)

Don't know if reading slumps and life slumps coincide (usually I can keep reading no matter what), but for some reason since autumn started I've had the hardest time getting through books as quickly as I have been this year. I finally managed to finish two, one of which I bought in Mackinaw City last year and another I bought on a whim while killing time at bookstore some weeks ago.

Ghana Must Go by Taiye Selasi 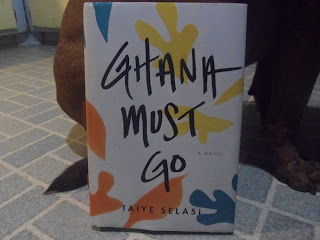 For a while, Kweku and Folasadé's meeting at an HBCU in Pennsylvania in the 1980s was the beginning of their own African immigrant success story. Kweku, having escaped poverty in Ghana, established himself as a talented surgeon in Boston while Folasadé, having escaped war in Nigeria, traded her would-be law career for selling flowers and raising their four children. The family's wellbeing and the solidification of their place in America rests on Kweku, until his ability to provide is wrested away from him. Too proud to admit his failure to his family, he runs away from home, eventually divorcing his wife and moving back to Ghana, leaving Folasadé to carry the family on her own. Fifteen years later Kweku dies from a heart attack at home with his second wife, prompting Folasadé and her grown children to congregate in Accra. Not only must they renconcile their feelings toward Kweku, but they also must contend with unresolved bitterness between each other.

Olu, the eldest, is a surgeon just like his father but resents the stereotypical deadbeat dad that Kweku represents. He is also afraid to love his own wife in the full and vulnerable way that she deserves. Taiwo and Kehinde, the twins, have always been revered for their beauty and they possess an otherworldly connection to each other that is respected as sacred. Their relationship is ruptured by events that occured during an abbreviated stay in Nigeria not long after Kweku left the family. In the present Kehinde, a famous artist, is recovering from attempting to take his own life, and Taiwo, a law school dropout, is angry at the world and can't stop going back to her married lover. And lastly there's Sadie. Kweku was instrumental in helping her survive after being born premature, but he left when she was too young to know him as her father. Sadie resents being treated like a child, and unlike her siblings she doesn't seem to possess any special skill or beauty. She idolizes her wealthy white friends and uses bulimia to cope with feelings of inadequacy. Each of the six family members lends their perspective, with Kweku's voice being most prevalent in the first part of the book. Giving Kweku a proper send-off is integral to his posthumous redemption, and sets the stage for each family member to wrestle with their own lingering hurt and identity issues.

What I love most about Ghana Must Go is that Taiye Selasi is in no rush to tell us everything we want to know. She'll offhandedly throw in a hint of extremely pertinent information about a character or event while discussing something else entirely, and won't provide a complete explanation until she decides to do so in her own time, giving us little tidbits along the way. You almost have to read the book twice to fully get it, because you realize that you were given clues previously but weren't aware of it. If you have ever had a difficult relationship with a father figure, have any connection to immigrant families, have ever dealt with sibling rivalry, or would like to learn more about West African history and customs, then definitely read this book!


"that the world is both too beautiful and more beautiful than he knows, than he's noticed, that he missed it, and that he might be missing more but that he might never know and that it might be too late... and that it might not even matter in the end what he's noticed, for how can it matter when it all disappears?... how can he be faulted for all that he's missed when it's all wrapped in meaninglessness, when everything dies? He is pleading his innocence (I didn't know what was beautiful; I would have fought for it all, had I seen, had I known!)" (20-21).

"Only foolish artists wait until they're famous" (83).

We Are Never Meeting in Real Life by Samantha Irby 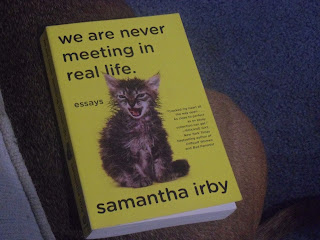 I believe I first heard about this book when Crissle from The Read gave it a shoutout. Then a few weeks ago I spotted it in a bookstore, skimmed through it and read the line "ALSO HER PERSONALITY WAS TERRIBLE. THAT BITCH DIDN'T EVEN PURR" (35), and I was sold! To be honest, I don't enjoy reading personal/opinion essay collections that much, but I keep doing it because I'm nosy and I hope that the people who write them have something both challenging and humorous to say. This one took me longer to read than I'd expected because, like Oscar Wao, it got a little too real for me and I related to much of it on a very personal level. It's one of those books that makes you cackle and then depresses you and then makes you cackle again, and so on.

In a nutshell, Samantha is a Chicago-based writer who uses humor to interrogate pop culture and the various aspects of life that suck. And life has kind of sucked a lot for her. She grew up poor in a dysfunctional family, and both her parents were deceased before she entered her twenties. As an adult she is a black, queer, fat, opinionated woman in America with digestive issues and a chronic illness. And let's not forget the depression and anxiety that she didn't have the privilege to be treated for until she was on her own. She has self-professed weird habits, likes to stay at home whenever possible, and has a comical love-hate relationship with her cat named Helen Keller. She's kind of a mess, but as far as she's concerned, with everything she's dealt with and still has to deal with, she's earned the right to do whatever she wants (and I don't disagree)!

My favorite essays are as follows. "The Miracle Porker" tells how she ended up with her sickly and spiteful cat. "Do You Guys Pay Your Fucking Bills or What?" is about paying for things as an adult and how impulse spending is different for people who grew up poor. "You Don't Have to Be Grateful for Sex" is a candid reminder that fat or "ugly" girls don't have to share time or their bodies with anyone who doesn't treat them well; being able to have sex with a hot guy changes absolutely nothing about your quality of life. "A Total Attack of the Heart" is all about mental illness, beginning in her youth. "Mavis" gives the ins-and-outs of a lesbian relationship (eye-opening for me, as I definitely need to read more LGBTQ literature). "Fuck it, Bitch. Stay Fat" deals with weight, weight loss, and body image, and I love this essay the most simply for its title. "I'm in Love and It's Boring" discusses first loves and the boring-ness of being in a healthy relationship for once. And "Yo, I Need a Job" details the skills she picked up by working as a receptionist in an animal hospital. The other essays are great too, but the aforementioned are my favorite. If you like reading a mixture of jokes, adorable awkwardness, and sadness, then read this book!


"I don't know that I'm always happy in this big body. Or what there is that I can actually do about it. I was not born to delicate people... This rotting meat corpse they created is riddled with inexplicable disease and is wide as it is tall. I was never destined to be a waif, or to have a less-than-terrible relationship with food. I grew up poor, anxious, and unhappy, with cheap carbohydrates the only affordable substitute for joy. If I had a depressed kid right now, I'd drag him to a doctor and ask for some Wellbutrin, but that was never an option for tiny me" (154).