BOOKS! (The Brief Wondrous Life of Oscar Wao + Not Too Far from China)

Today I've got a Pulitzer-winning novel that I eyed many times back when I worked at a bookstore, but only decided to buy a few months ago. I've also got the second poetry collection from an artist I met at the inaugural Detroit Festival of Books (Detroit Bookfest).

The Brief Wondrous Life of Oscar Wao by Junot Díaz 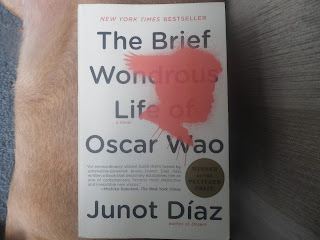 Junot Díaz managed to educate me about Dominican history and culture AND tell me about myself in the same novel, so it took me longer to get through it than I otherwise would. The similarities between me and Oscar kept piling up, and things just got too real for me to simply take a leisurely stroll through this book.The son of a single mom who emigrated from the Dominican Republic at the end of the Trujillo era, Oscar spends most of his life as an outcast in his hometown of Paterson, New Jersey. Be it for his obscure references, lofty way of speaking or his dearth of "normal" Dominican male characteristics, he is ridiculed by most people he interacts with. Oscar is a fat nerd, a gifted writer, and an awkward hopeless romantic who is oft-rejected and prone to depressive episodes.

Most of the novel is narrated by Yunior, a fellow Dominican-American guy who used to be Oscar's roommate at Rutgers and also dated Oscar's sister Lola for years. Yunior and his friends called him "Oscar Wao" in college after making a correlation between his chubbiness and that of the prolific writer, Oscar Wilde. Hence, The Brief Wondrous Life of Oscar Wao. After a tumultuous undergraduate career at Rutgers which included two suicide attempts, Oscar graduates and works as a teacher at his old high school, re-entering the hell that is daily teenage cruelty. Feeling like his life is going nowhere, he uncharacteristically joins his mom and sister on a summer stay in the DR, visiting relatives. During this time he falls in love with a prostitute who is also his family's neighbor, and having finally tasted love, he's willing to die pursuing it. Literally, die.

If nothing else, Yunior (and by Yunior I really mean Junot Díaz) is exceptionally thorough. I thought I was cracking open a simple story about an anguished Afro-Latino youth, and ended up diving headfirst into a family history, footnotes included! You can't tell Oscar's story without also telling his sister's (his only tried and true friend). Can't tell either of their stories without telling how their mother ended up leaving the DR, and for that you have to start all the way back from her childhood. Can't mention Beli's childhood without telling how she became an orphan. Can't tell that story without telling how her immediate family was destroyed by the dictatorial Trujillo regime, seemingly cursing the family forever. And you can't tell that story without explaining who Trujillo was, and how he ruled selfishly and brutally over the DR for 30 years, seemingly cursing the island forever. In Oscar's family alone there are experiences shared between generations, such as betrayal by authorities, visions of men without faces, beatdowns in cane fields, being led back to life by mongooses, and devotion to lovers or would-be lovers who never truly love you back.

The Brief Wondrous Life of Oscar Wao is, in a word, magnificent. It taught me so much about the Caribbean and reminded of some personal "stuff" that I've persisted in not dealing with sufficiently. Even now, I am left with a sense of awe and gratitude. Read it, y'all! Just read it!


"The next day he woke up feeling like he'd been unshackled from his fat, like he'd been washed clean of his misery, and for a long time he couldn't remember why he felt this way, and then he said her name" (40).

"Beli, who'd been waiting for something exactly like her body her whole life, was sent over the moon by what she now knew. By the undeniable concreteness of her desirability which was, in its own way, Power... Telling Beli not to flaunt those curves would have been like asking the persecuted fat kid not to use his recently discovered mutant abilities. With great power comes great responsibility... bullshit. Our girl ran into the future that her new body represented and never ever looked back" (94).

"Nothing else has any efficacy, I might as well be myself.
But yourself sucks!
It is, lamentably, all I have" (174).

Not Too Far from China: A Poetic Escape by Zuri McWhorter 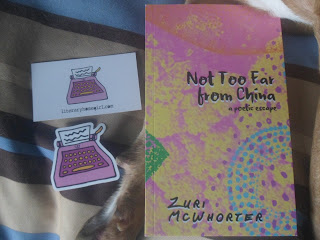 Full disclosure, the Detroit Bookfest was and is a great idea, but everyone severely underestimated what the turnout would be. Rather than hundreds, there were likely thousands of people who floated through the event that day. So it was more of a hustle to find good reads while staying out of people's way, rather than the casual book-perusing experience that I'd expected. But anywhooo.

I chanced upon a novel called Beijing Doll at the table of Zuri McWhorter, and on that same table she had stacks of her own work which included Not Too Far from China. I was too shy to chat with her, but she seemed like a dope person, her poetry collection seemed interesting, and her typewriter logo and stickers looked cool, so I bought both books.

Most of the poems are about the unspoken subtleties of relationships, self awareness and self doubt, the sensations of being alive. A young black creative soul wandering through life. This entire "poetic escape" is remarkably observant and sincere. Support this independent, native Detroiter, WOC artist and order this poetry collection!

"Now,
I may deteriorate
in peace;

tear down these haunted hallways
let the library get some sun

Later,
I may redecorate;
hopefully, still at peace" (from "Deteriorate")


"in coils, her
voice bounced
in the air and hung
around