I usually write about books in pairs because it helps me review more books in less time, but today's review is a little different. For the first time, I'm reviewing a book at its author's request! And the author is none other than Zaakirah Muhammad, one of my recent guests on Young, Gifted and Abroad. This isn't the first time that I've reviewed a book written by one of my podcast guests, but it is the first time that I've been directly asked to do so. After I interviewed Zaakirah in February, she found out that I write book reviews and asked me to review her memoir. I am not being paid to write this review, but I do want to acknowledge that Zaakirah graciously sent me a physical copy of her book on her own dime. All opinions expressed in this review will be genuine and honest as always. Let's get to it, shall we?

Seeing Life Through a Different Lens: A Survivor's Memoir on Overcoming Adversity with Resilience by Zaakirah N. Muhammad 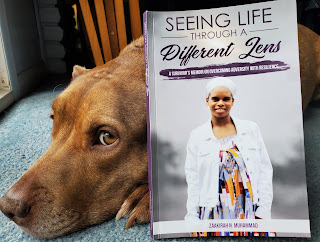 Published in December 2019, this memoir traces Zaakirah's story from when her mom was pregnant with her to the present. From partway through her high school years and onward, all of the writing is Zaakirah's alone. But most of the book before that point also includes sections written by her mom Khai'dah, which I think is an excellent choice. In fact, this book has me wondering why more people don't co-write memoirs with their parents!

As an infant, Zaakirah had a form of cancer called retinoblastoma. The cancer was detected and treated early thanks to her mom's vigilance, but pretty soon afterward Zaakirah's parents had to learn how to raise and shape a life for a child with disabilities. (Zaakirah's right eye was surgically removed as a baby and she later developed partial hearing loss, so much of the book focuses on her experience growing up as a deaf-blind person.) Between Florida and Tennessee, Zaakirah spent many years of her life seeing multiple specialists, having various vision and hearing tests done, and getting fitted and re-fitted for a prosthetic eye. And though Zaakirah contributes what she remembers from those times, her mom's perspective is invaluable in helping the reader understand the decisions that were made and how much Zaakirah's parents endeavored to support and protect her. And so, instead of having to craft a narrative about her infancy and childhood by herself, she includes excerpts from "Sun Daughter", a blog that her mom Khai'dah wrote to encourage other parents and families affected by retinoblastoma.

When I interviewed Zaakirah for my podcast, she was very open about her experiences, so much of what I read in her memoir was familiar to me already. However, there was plenty that I didn't know. For instance, I didn't know that Zaakirah was born in the same month and year as me. I didn't know that she often became physically exhausted from trying to understand what people around her were saying on a daily basis (and that this is a common struggle for hearing-impaired people). I didn't know that Zaakirah loves music as much as she does. I knew she opted not to get a bachelor's degree, but I didn't know that she went to art school in D.C. to get a certification in photography instead (the first of a number of certifications she would earn in her adult life). I knew that she started traveling internationally fairly early in her young adulthood, and that she married her Gambian husband not long after being introduced by mutual friends online and then meeting him in person in The Gambia. What I didn't know was that "not long" was actually a matter of months—a whirlwind, indeed! And obviously starting a business and being a freelancer aren't a cake walk for most people, but I didn't know how much Zaakirah struggled to find stability as a working photographer and media strategist. At multiple points in her life she's had to be precise about the kind of person she wants to be and the type of work she wants to do, and she's overcome numerous obstacles in order to do so.

While Seeing Life Through a Different Lens could use some extra lovin' by way of editing, my only major criticism is that this book could stand to be longer. There are a number of aspects that Zaakirah mentions but doesn't dwell on too long before moving on to something else, and I would've loved to learn more about some of those things. Like more of the particularities of being a Black Muslim girl who's continued with the faith in adulthood. Or more about her adult friendships and relationships. Or more about what the photography industry is like, what it's like being a blind photographer, and how her peers and clients interact with her. Obviously Zaakirah's still quite young, so much of her life is still unwritten (cue Natasha Bedingfield), and perhaps there are some details she wanted to leave out in the interest of privacy. But those are the things that I'm still curious about. If you want to learn more about people who live with disabilities, if you're a professional or aspiring artist of any sort, if you've ever been through hardship, if you want an example of what supportive parenting looks like, or if you just want to read about a Black woman living life the way she wants to live it, then read this book!


"I allowed the camera to be my voice. By sharing my story, I allowed others to see life and humanity though my monocular vision. It is truly a blessing to be able to see the beauty that is surrounding us" (22).

"That was my life lesson from my mom- to always do something outside of the norm because the right people will accept it. That advice from her only made me a stronger person, student, and later entrepreneur" (77).

"Maybe you just started on that journey, maybe you're still on it, and there's a deep feeling of loneliness as you fight through your situation quietly in hopes that nobody knows just how real life has gotten for you. Trust and believe you are not alone" (108).