Apparently today is World Book Day, part two: the UK, Ireland, and various folks on the Internet celebrated it on March 5th this year, but the day promoted by UNESCO worldwide is April 23rd. So what better day to put out a new book review? Two reviews on here in one month, wow. Can't remember the last time I've been able to do that (and without even planning to do so)! Like my last review, this time I'm once again doing something a little different. First up is a novel I bought in order to write a guest review for a different website, and then I have a memoir that I bought from my local library. Both of today's selections were written by Black women.

The Shadow King by Maaza Mengiste 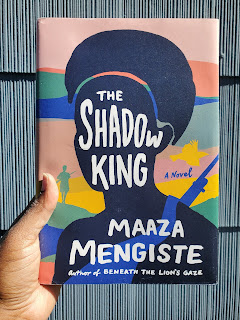 A little while ago, I was selected to write a guest review for an online reading community and book club for people of color called Livre Cafe! And of the available options that Domonique (LC's curator) was seeking reviews for at the time, I chose The Shadow King. It's an unflinching and informative novel about Ethiopian women who fight to resist Italian colonizers in 1935. The questions that Domonique sent me for the review didn't ask about quotes, so I'll include my favorite quotes from this novel below like I always do. But to read more of what this book is about and what I thought of it, check out my guest review on the Livre Cafe website and Instagram page.

"And why wouldn't some of us read, Carlo? Why not? You can find an Ethiope in the earliest books. We are older than this Roman culture you're so proud of. We existed before you, when you were all just peasants, not even a people" (331).

"Her heart twists in her chest as she realizes that she is watching an old version of herself, that girl who was a keeper of things she should not have claimed as her own. He is doing as she once did, in the naïve belief that what is buried stays that way, that what is hidden will stay unseen, that what is yours will remain always in your possession. He is being foolish" (375-376). 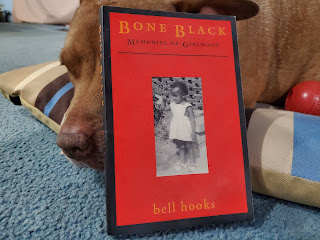 Back in early February when we could still go out and sit in public places for extended periods of time, I went to my local library to edit an episode of Young, Gifted and Abroad. The library has a small room full of used books that people can buy for super cheap, and when I stopped by this room on my way out, the red and black cover of this bell hooks memoir caught my eye. So far in 2020 I've been committing to buying fewer books so I can focus on reading the ones I already have, and at the time I hadn't bought a single new book. Since I'd remained disciplined up to that point, and because I hadn't read anything by bell hooks before, I decided to fork over the requested 50¢ for Bone Black as a Black History Month present to myself.

In the memoir's foreword, hooks mentions being inspired by the way that Toni Morrison's The Bluest Eye examines various nuances of Black girlhood. hooks is also motivated by her own desire to add to the narrative by writing about her own girlhood, insisting that, "Not enough is known about the experience of black girls in our society" (xii). This memoir was published in 1996, and while much more literature and media are available on the subject now in 2020, there are still so many Black girl stories that need to be told and valued. In Bone Black, bell hooks takes the opportunity to tell hers in both first-person and third-person.

Growing up in the 1950s and '60s in a southern Kentucky town as one of seven kids, bell hooks is a book-loving, observant, and strong-willed child who is often misunderstood within her family. Because of this, she recounts frequent moments of profound sadness and loneliness as she searches for escape, for belonging, for answers. As with many stories that focus on childhood and adolescence, what Bone Black relays to readers is a gradual loss or comprise of innocence. And because it's bell hooks, added to that are her early encounters with racism, colorism, segregation, church hypocrisy, homophobia, classism, and gender-based discrimination and violence. In fact, much of the book focuses on gender dynamics and expectations that are impressed upon her via her own family or events that she witnesses in her local community.

Of course, it's not all pain and frustration. Even amidst parental dysfunction, young bell hooks loves her family. She loves the color black in every form it appears (skin tones, clothing, paintings, and so on). She gets along swimmingly with old people, and she lovingly remembers specific elders who influence her life and show her kindness. She finds refuge in reading books, and discovering poetry is particularly instrumental to her process of carving out her identity and purpose. And even with all the ills she examines, the appreciation that hooks has for the land, for the seemingly small things, and for southern rural life—especially under the influence of two of her grandparents—is undeniable. If you're interested in bell hooks' work, want to read a Black girlhood story, are interested in Black southern life, are a feminist, or just want a fairly quick read for yet another day of staying indoors, then read this book!


"Friday is the day to drink. It is the day when working people begin to try and give themselves back the pleasure that the job has taken away. We do not like the beginning of these days when people begin to change, become something else so as to reassure themselves that the white folk have not taken away all their powers to create. We do not like the way they change because the tenderness, the smiles, the laughter are all fleeting, will fade. We watch the grown-ups begin in laughter and end in tears" (68).

"There is much to celebrate about being old. I want to be old as soon as possible for I see the way the old ones live—free. They are free to be different—unique—distinct from one another. None of them are alike... My grandfather tells me that all he ever wanted was for the world to leave him be, that it won't let you be when you are a young man" (88).

"She did not want the mother to know that it was precisely her marriage that made it seem like a trap, a door closing in a room without air. She could not tell her mother how she became a different person as soon as the husband left the house in the morning... everything that she was not when he was around. When he was around she became silent" (98).

"For the first time in my life I hear someone say that there is nothing wrong with feeling alone, that he, too, has been at the edge, has felt the fear of drowning, of being moved toward death without consciously contemplating suicide... he tells me that the young woman standing on the cliff, alone and afraid to live, is only suspended in a moment of hesitation, that she will overcome her fear and leap into life" (177).