I did it y'all! After receiving the box set of N.K. Jemisin's Broken Earth trilogy from my generous and thoughtful friend Sho last December, I read it all in under a year! It took me from December 2021 to September 2022 to finish The Fifth Season, and a mere three weeks to finish The Obelisk Gate in October. Admittedly, I dragged my feet on finishing The Stone Sky because I didn't want this epic story to end, but I did manage to finish it on Thanksgiving so I could write this review before November's over. As a reader and reviewer reading 1200+ pages of a genre that's outside my wheelhouse, I am very proud. And as a new fan of this trilogy, I am forever changed. [UPDATE 12/4/22: See the end of this review for physical evidence of me being forever changed, as of my 30th birthday yesterday!]
The Stone Sky by N.K. Jemisin
For all those who have to fight for the respect that everyone else is given without question
(Epigraph for The Fifth Season)
To those who have no choice but to prepare their children for the battlefield
(Epigraph for The Obelisk Gate)
To those who've survived: Breathe. That's it. Once more. Good. You're good. Even if you're not, you're alive. That is a victory.
(Epigraph for The Stone Sky) 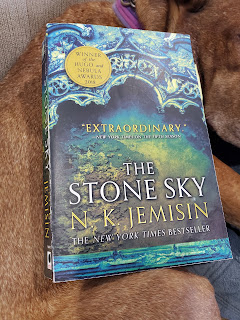 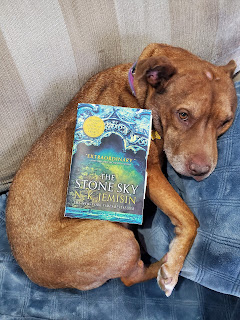 Whew. Okay. Wow, right? I had so many additional notes I wanted to share in this review of The Stone Sky, but it's already gotten pretty long even for me (which is saying A LOT, I know). This is not a dissertation, and I've had to remind myself multiple times while writing about the Broken Earth trilogy that my task is merely to summarize these stories as I understand them and try to make interesting points, draw interesting connections, or ask interesting questions based on my understanding. No need to write the books all over again.
So out of all the extra notes I had, I'm most strongly left contemplating all the things Essun, our hero, doesn't get. She doesn't get to tell Lerna she loves him. She doesn't get to have a happy home life with Lerna, their new baby, and Nassun once everything has been resolved (a potential fourth family for Essun, after having lost the one she grew up in, the one she had with Alabaster and Innon, and the one she had with Jija). She doesn't get to repair her relationship with her daughter, or even see Nassun through the rest of her childhood and approaching adolescence. She doesn't get to avenge her son Uche's death because Nassun kills Jija before she can get to him. If we're being real, she doesn't even get the triumph of achieving the enormous moon-wrangling mission that Alabaster bequeathed to her (even though it's her influence that ultimately prompts Nassun to do it for her). Essun is a reluctant hero to begin with. And even after accepting her role and stepping up to the gargantuan task placed before her, she's a hero who, technically, fails. Depending on if Danel and/or Nassun is successful in championing Essun's legacy to the masses, Essun might not go down in history as the 44-year-old, Black, dreadlocked, widowed, disabled, pregnant mother who escaped slavery and used her superpowers—powers for which she was subjugated and discriminated against—to spare humanity from extinction.
Nevertheless, there are important things that Essun does get. She gets to use her dying moments to show Nassun how much she loves her and is proud of her, something she neglected to express as a parent because she was focused on making sure Nassun had the tools to survive. Finally expressing her feelings toward her daughter in a way that her daughter could understand and receive, is what makes the difference. Furthemore, after her rebirth as a stone eater, Essun gets to spend eternity fighting for justice and improving the world, a desire that's been brewing in her all along (but especially since the time when she, as Syenite, first became a mother). And also, with Hoa literally taking her hand and encouraging her to never be patient or complacent, she gets to never be alone or fight alone again. And also, who knows whether she won't still be guiding and looking after her daughter as Nassun's new stone eater companion, even if Nassun can't use her powers anymore?
In completing this trilogy, I'm reminded of the unexpected yet profound emotional and spiritual experience I had while reading Bernice L. McFadden's Nowhere Is a Place over the summer. And just like with Nowhere Is a Place, I feel like I've been brought to this body of N.K. Jemisin's work at the precisely right time. As a Black woman choosing to read the Broken Earth trilogy as an allegory for Black people finding a way, for themselves and for future generations, to survive and mend a world that hates us, I find myself similarly touched and similarly encouraged not to yield to despair. So if the lesson I learned from The Fifth Season was to imagine the possibilities beyond a status quo that isn't as natural or immutable as it seems, and if the lesson I learned from The Obelisk Gate was to trust people and believe in community for my own sake, then the lesson I've learned from The Stone Sky, as hokey and trite as it might sound, is this: I am not alone, none of us are, and it's okay (imperative) for us to want and demand the impossible.
As soon as I read the last page of book 3, I wrote in the margins, "BRILLIANT. GORGEOUS. NKJ is a prophet! What a gift she's give us with this trilogy!" I feel like I've exhausted all my words at this point, and I'm getting teary again thinking about what a treasure this series has been to me. So in closing, I'll leave you all with the message I sent my friend Marlee once I completed this journey on Thanksgiving (directly after messaging Sho): "And now I'm sitting in my room at my grandpa's house crying because I just finished book 3 and I feel overwhelmingly grateful to have read the Broken Earth trilogy, especially at this time in my life. It's hard to explain, but you can tell NKJ gave so much of herself to write this story that emphasizes hope (amidst hopelessness), and community, and not being a colonizing a-hole, and letting Black people be, etc. in a way that just goes... beyond, haha. And moms! There's a lot of stuff about moms in there too. Oh and not exploiting/depleting the planet! That's another big part of it too." Read this trilogy and maybe change your life!
Favorite quotes:

"They're afraid because we exist, she says. There's nothing we did to provoke their fear, other than exist. There's nothing we can do to earn their approval, except stop existing—so we can either die like they want, or laugh at their cowardice and go on with our lives" (109).
"But there are none so frightened, or so strange in their fear, as conquerors. They conjure phantoms endlessly, terrified that their victims will someday do back what was done to them—even if, in truth, their victims couldn't care less about such pettiness and have moved on. Conquerors live in dread of the day when they are shown to be, not superior, but simply lucky" (210).
"I want to understand what she means us to learn... I also want to simply look at her face and bask in that deep, powerful orogenic presence of hers. It's nonsensical... I want her to look at me. I want to speak to her. I want to be her.
I decide that what I'm feeling is love.
...I think of what life I might want for myself, if I could have a choice... I think of living with Kelenli. Sitting at her feet every night, speaking with her as much as I want, in every language that I know, without fear. I think of her smiling without bitterness and this thought gives me incredible pleasure." (205, 261).
"Impossible to delude oneself in a moment like this. Impossible to see only what one wants to see, when the power to change the world ricochets through mind and soul and the spaces between the cells... Impossible not to understand that Nassun has known Schaffa for barely more than a year, and does not truly know him, given how much of himself he has lost. Impossible not to realize that she clings to him because she has nothing else—
But through her determination, there is a glimmer of doubt in her mind... Barely even a thought. But it whispers, Do you really have nothing else?
Is there not one person in this world besides Schaffa who cares about you?" (381-82).
"'The Fulcrums are wrong... Imprisonment of orogenes was never the only option for ensuring the safety of society.' I pause deliberately, and she blinks, perhaps remembering that orogene parents are perfectly capable of raising orogene children without disaster. 'Lynching was never the only option. The nodes were never the only option. All of these were choices. Different choices have always been possible.'
There is such sorrow in her, your little girl. I hope Nassun learns someday that she is not alone in the world. I hope she learns how to hope again" (395-96).