This was one of eight books that I recently bought at a local library book sale. I only paid $1 for it, and after having read it I think that that was an appropriate price. I don't know. Despite the genre's intended purpose, I guess the cynic in me is always skeptical when people rave about self-help books changing their lives. I'm more likely to be moved and challenged by fiction than self-help, but that's just me. And I'd heard so much about how transformative and revolutionary and blahdeblah this book was, that it got to a point where when I spotted it at the book sale, Meh. Might as well get this one out of the way was all the enthusiasm I could muster. Suffice it to say that I was not greatly impressed. Being introduced to ancient Toltec wisdom originating out of southern Mexico sounds absolutely fascinating, but perhaps the hype ruined this one for me.

The Four Agreements: A Practical Guide to Personal Freedom by Don Miguel Ruiz 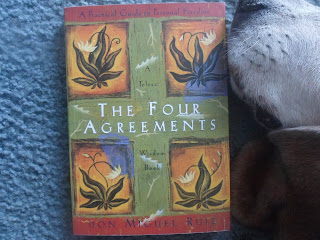 As Don Miguel Ruiz explains it, an agreement is a belief that you accept as true. Once an idea is presented to you and you believe it, you agree with it and to it. You make an agreement, or a mentally and emotionally binding contract with that idea and its source. The problem is, however, that people make too many bad agreements that hold them down. As children, certain agreements are forced on us before we've had the opportunity to consider otherwise, and as adults we continuously fall into the trap of aligning ourselves with ideas that do not serve us. Don Miguel Ruiz assures readers that we can break those bad agreements and form new ones through the power of our minds, of words, and of love in action. That's where "the four agreements" come in.

Now. I'm all for when Indigenous voices are heard and heeded. I'm all for when Indigenous wisdom and beliefs are propagated for enlightenment as opposed to dilution and thoughtless consumption. But I just don't understand the hype about this particular book. Ruiz has a lot of useful and worthwhile ideas, but I've heard a lot of them before. I feel like if you have a measure of common sense and have had some decent moral upbringing or instruction (both of which are relative, I know), then most of what Ruiz writes is nothing new. Take each of the agreements, for example:

Be impeccable with your word (say what you mean, mean what you say, and  use your words for good in a way that uplifts rather than injures).

Don't take anything personally (what someone thinks of you is none of your business, and as long as you don't consume the negativity that people give you and spread it around, it won't affect you).

Don't make assumptions (communication brings understanding, so don't claim to know what's in other people's minds and don't expect them to read yours).

Always do your best (be disciplined about doing what you need to do in order to be fulfilled, but don't beat yourself up about whether your best is the best or not).

Not too many novel ideas, if you ask me. However, I also know that no matter how often people hear the same thing over and over from others, sometimes it has no effect until they hear it from a certain individual, in a certain context, put a certain way. Then it suddenly makes all the sense in the world and seems easily applicable. What's old news to me may be revelatory to others.

With that said, I think that The Four Agreements' major appeal lies in its delivery. Ruiz's assessment of society and human interactions as they are currently is grim, yet he's exceedingly optimistic and certain about the alternatives. Maybe you've heard it all before but you've never thought much about "energies" or the power of your own words. Maybe you've never considered that love can exist everywhere, starting with yourself. Or the prayers! Now I did especially enjoy the prayers for love and freedom that Ruiz ends the book with, as they speak to real needs that people are suffering from right now. So that's something, at least. Basically, The Four Agreements has its merit, but I'm not sure it's worth the hype. I'm sure that anyone could draw relevant points and inspiration from it, but don't expect it to be your crystal ball or anything.


"Imagine that every single time others gossip to you, they insert a computer virus into your mind, causing you to think a little less clearly every time. Then imagine that in an effort to clean up your own confusion and get some relief from the poison, you gossip and spread these viruses to someone else... The result is a world full of humans who can only read information through circuits that are clogged with a poisonous, contagious virus... the chaos of a thousand different voices all trying to talk at once in the mind" (41).

"I love you just the way you are, and because I am your creation, I love myself just the way I am. Help me to keep the love and the peace in my heart and to make that love a new way of life, that I may live in love the rest of my life. Amen" (138).