"What Would Dory Do?" - Finding Dory

Going to see this movie was my first time viewing a film before its official release date. Friday is the official release day for most films, but oftentimes a few showings will be available the Thursday evening before. And as early as 6pm, not just at midnight. Such was the case for Finding Dory, and since I'd been waiting 13 years for this sequel, I figured why wait an extra day if I don't have to? Luckily fmost of the people in the cinema with me were ages 13-50, so even with it being a kids' film there were no rambunctious little ones to distract from the fun!

One year after the end of Finding Nemo, the regal blue tang named Dory begins to remember the parents whom she got separated from as a guppie. Even given her short-term memory loss, she is able to recall enough details to go searching for them─which takes her and her clownfish friends Marlon and Nemo far from their home in the Great Barrier Reef all the way to a marine wildlife center in California. The trio gets split up, but thanks to a few new friends, they might be able to not only reunite with each other but also find Dory's family. 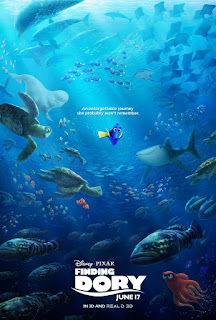 What I really like about this film: The characters at the marine wildlife center are the best! I'm a sucker for character development and Disney/Pixar really did their work with this one. A grouchy rogue octopus who's determined to get transferred to an aquarium in Cleveland? A hypochondriac beluga whale? A nearsighted whale shark? A pair of Australian sea lions (Idris Elba!) who refuse to share space on their resting rock with their mentally challenged fellow? AND a ragamuffin seabird named Becky? They're all just too good! I laughed until my head hurt and I could barely breathe.

Dory's memory problems are perceived as a weakness, but it turns out that she is able to survive, go on amazing journeys, and positively influence the animals around her precisely because of who she is, not in spite of who she is. I'd like to hope that this sends an encouraging message to special needs children and their parents especially, since her parents are often shown in flashback scenes painstakingly coaching her so that she won't wander too far and get lost. And even though this happens anyway, Dory is able to adapt beyond anyone's expectations, even her own.

What I don't like about this film: Absolutely nothing! I wouldn't say it's better than the first film, but it's definitely a sequel that's worthy of its predecessor.

Would I recommend it?: Of course! If you are a '90s baby in particular, you owe it to your inner child to go see this film. No one can appreciate the significance of this sequel like we can. Laugh, cry, reminisce, I don't care. Just go see it!
Posted by Deela (Danielle G.) at 6:54 PM