Ever since I started this job at the end of March, I've been slipping when it comes to reading. Inexplicably indecisive, helplessly unmotivated, so many books started but not finished yet. For this reason I'm grateful that I pulled An Untamed State out of my to-read stack. I read it in three days; I would've finished it sooner but I haven't yet mastered the art of staving off sleep at will for consecutive nights. I found out about this book from the author herself; she mentions it and the trauma of rape in her essay collection Bad Feminist. Reading that made me want to read more of her work, and when I found out earlier this year that a film adaptation of this novel was in the works featuring the dream director-actor team of Gina Prince-Bythewood and Gugu Mbatha Raw ('Beyond the Lights'), I rushed out the next day to buy it.

An Untamed State by Roxane Gay 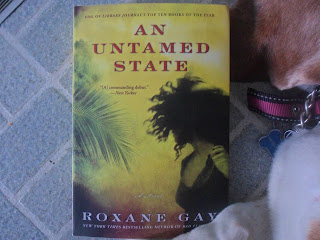 Mireille is a Haitain-American woman vacationing with her husband and child at her parents' home in Porte-au-Prince. One day she sets out with her little family for a day at the beach, but is kidnapped in broad daylight from in front of her parents' mansion as soon as the gates close.

Fortunately for her, her father is one of the golden sons of Haiti who made it, having moved to America and established a certain fortune that has up until now allowed her to live in luxury whenever visiting her mother country. Unfortunately for her, her father is one of the golden sons who made it, and he's too proud to relent to demands for her ransom out of an indignant fear that he might lose all he's built to countrymen who are now beneath him. His stubbornness costs Mireille two weeks of her life, wherein she is repeatedly raped, gang-raped, beaten, starved, and tortured day in and day out until he pays up. Usually kidnappings such as this are strictly business, but her chief captor has a personal vendetta against rich returnees like her father. The cruelty he inflicts on her is a way to live out all his sadistic, sex-loving, woman-hating fantasies, but it's also payback. In his eyes, this is simply the price that rich Haitians have to pay for not spreading their wealth around to their fellows.

This novel derives it title from a passage in which Mireille describes the necessity to devolve in order to survive. She forces herself to forget all that she is or was or had, finding an empty and numb place inside herself that will allow her to endure all that's being done to her. She can no longer hold onto her humanity, but rather trains her mind to think of herself as a wild animal "existing in an untamed state" (190). For the first half of the novel, readers follow Mireille through some of the most horrible moments of her kidnapping until she is paid for and released. During the second half, readers accompany her as she stumbles along, recovering and fighting even against herself to assemble a life that makes sense to her.

Mireille's journey is hellish and raw and unspeakable, and her healing process is triumphant but by no means smooth or full. And yet, one of the brightest and most redeeming elements to this story is her relationship with  her husband Michael. Theirs is the most consumingly passionate, realistically feasible relationship I've ever read on paper. Their love is so, so deep and beautiful. Their relationship is work like any relationship is, and at times they both consider turning away. But Mireille never has to try too hard. She doesn't have to change herself or do any convincing. She is herself, and Michael loves all of that self, ultimately standing by her even when neither of them know who she is anymore.

An Untamed State is rife with descriptions of the body, of fear, of memory, of pain, of loss, of desperation, of rage, of secrets and unanswered questions, of shrinking away, of endurance, of fighting back, of post-traumatic stress, of healing that progresses but is never complete. All of which are descriptions that I think only certain people with certain experiences would've been able to write in truth, though I'm sure it doesn't feel like any privilege to be able to do so. As a survivor of gang rape herself, Roxane knows and reveals certain sensations that only someone who's been reduced to her/his body could relay with as much dignity or justice as she does. This is her testimony. Nevertheless, at the same time I suspect that nearly any woman who's been here long enough would be able to connect with Mireille. Learning to shrink, bend, break, silence, yield or otherwise grossly inconvenience oneself for the benefit of the men around us solely because they are men and we are not─this seems to be a cruelly typical experience for women, even in seemingly benign instances.

Roxane Gay dedicates this book "For women, the world over". Well this young woman honors your trials and thanks you for giving of yourself to write this novel. You are a treasure and a mighty force in this world. Thank you, Roxane.

"It was important to remind this man that I was not merely meat for him to butcher. I was a woman. I was a mother and a wife and a daughter. I needed him to leave something of my body for those who loved me" (85).

"She told me my name and that I had a husband and son waiting for me. She told me I was safe and I was loved. She said these things over and over until I was able to believe them" (303).