Despite sitting in a bath and using my inhaler before bed Friday night, I woke up stiff, sore in most of the same places as before, and wheezy. But we'd already planned to bike Mackinac Island today and I hate to not stick to a set schedule, so back to the island we went! From breakfast at the hotel, Ma and I drove to Shepler's again with our bikes in tow, and we bought passes for them ($10 each) before boarding. 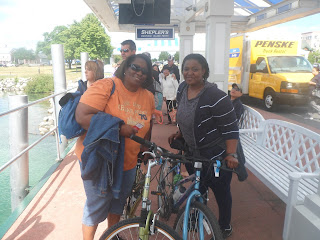 One thing I forgot to mention is that one of the biggest surprises for me since arriving on Friday was observing the substantial amount of Caribbean people working in Mackinaw City, on the ferries, and on Mackinac Island. Truth be told, I was anxious about whether going to northern Michigan would be safe for Ma and I as single black women, since I wasn't sure how homogeneously white the area would be, and since it was 4th of July weekend during this trifling election year, I worried about how aggressive or militant people's patriotism (and thus racism fueled by "patriotism") might be. Turns out that yes, the area certainly isn't the most melanated place on Earth, but it's also super chill. At the very least, people are friendly in that contrived "let's be on our best behavior and not cause trouble for each other" type of way. Like how folks are at Disney World. And there were all kinds of people of color visiting. Mostly Indian/South Asian and East Asian people, a handful of Latino people, a smattering of Black folk. It was a delight for Ma and I to see at least a few of us wherever we went. But for our Caribbean brothers and sisters, I'm curious as to how and why they ended up working in northern Michigan of all places. Need to do research on this later. 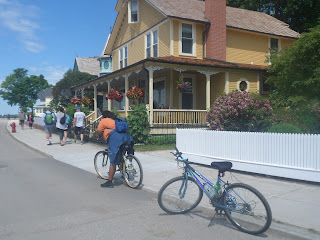 I'd wanted to go around the opposite way from Friday to get a different perspective of the island, so after arriving and getting situated we set out at around 11:50am. We made it all the way in about two hours, taking our time and only making two stops to rest and intermittent pauses for photos. I was overwhelmingly proud of both of us, especially Ma. She's not the most active or outdoorsy person, and she's not the most open to trying new things, but in the right situation and with the right encouragement, she really steps up and does her best to push her boundaries (I think we're somewhat alike in this way). Just like walking up Hyde Street in San Francisco, just like attempting to walk the island with me Friday and managing to walk back on her own, today she stuck with it and she rocked it! Hadn't been on a bike in about a decade, and she breezed along with me like it was nothing! I was so impressed! 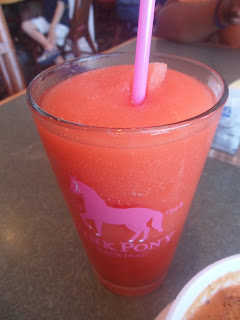 Our next stop was lunch at Pink Pony, which is a restaurant attached to Chippewa Hotel. I picked it because it has a fun name and the online reviews were very enthusiastic. I ordered the tomato bisque, whitefish tacos, and their Famous Rum Runner (a frozen drink composed of rum mixed with a whole bunch of sweet stuff )! It made me feel a little drowsy as all alcohol does, but it was perfection. Perhaps I'm a rum person; I only seem to thoroughly enjoy Long Islands or mixed drinks that resemble them in taste.The restaurant sits right on the waterfront and has four seating areas that are each decorated differently. We got to sit in the dining room with a spectacular view of Haldimand Bay. 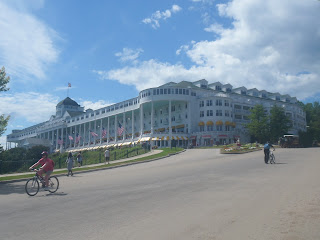 From there we trekked up the hill of Cadotte Street to the famed Grand Hotel. Our attention was to visit its front porch, since it's known as the longest in the world. But for some reason they weren't allowing non-guests to enter the inner premises unless they paid money. I wasn't sure if that was how it usually worked or if there was some special occasion going on that they wanted to keep the peasants away from. (I've since looked it up, and charging $10 per person for non-guests to enter the premises is indeed the Grand Hotel's policy. People have figured out ways to get around it, but it wasn't that serious for us so we left after seeing the parts we could see from where we stood). Off-limits or not, it's still a splendid building. 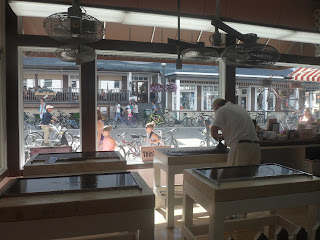 Back downhill on Main Street, we perused the shops for some must-haves. Ma wanted a T-shirt and some popcorn. I hadn't been interested in purchasing any souvenirs, but then I saw something in a Mackinac Mud Pottery that I found to be very clever being the 90s baby I am, so I bought it. I'll reveal what it is later. And it's almost impossible for some people to mention Mackinac Island without also mentioning fudge in the same breath. However, neither Ma nor I enjoy eating chocolate that much, so at first we weren't going to buy any. But then I remembered how the shuttle driver from Friday night recommended Ryba's as the best fudge on the island, and since we kept passing all three of Ryba's signature soft pink shops on Main Street, we gave in. Ma got her popcorn and some chocolate peanut clusters, and I got cashew turtles. 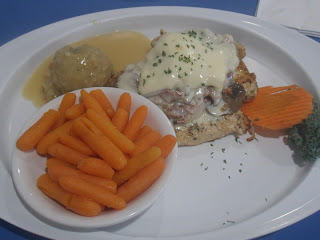 After riding the ferry back to Mackinaw City and dropping our wares off to the hotel, we had dinner at another one of the shuttle driver's recommendations. Darrow's Family Restaurant was right across the street from the hotel kitty-corner to Pastie & Cookie Co., and I hadn't thought much of it when I'd seen it before. Like most family restaurants, it has no frills or pretenses, and the menu items are deceivingly simple on paper and at first glance. But don't be fooled, the quality is excellent! No wonder there was a line out the door when we first showed up. Ma chose some sort of fried chicken dinner and I opted for the Mackinaw-style smothered chicken. They also have an extensive pie menu, but like chocolate I guess I grew out of enjoying that as much as I used to, so I passed. Plus we already had so many other snacks to enjoy! Back in the hotel room I caught the last 40 minutes of 'Suffragette' on HBO and nibbled on some popcorn and a couple turtles while Ma passed out.