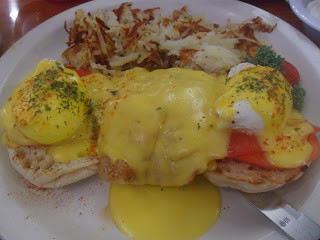 This morning we forewent the hotel's complimentary breakfast in favor of trying Pancake Chef, a popular restaurant we'd passed by on multiple occasions. I can't remember what Ma chose, but I selected the eggs Mackinaw (just like eggs benedict, except with slices of tomato added and whitefish used in place of Canadian bacon) and a half order of their apple jack pancakes. In hindsight it was way too much food, but it was everything I needed in that moment! 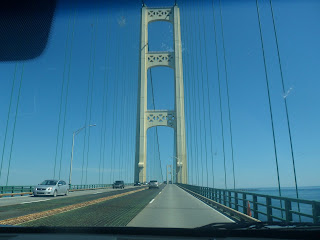 Monday had us on the road again, but this time across Mackinaw Bridge to the U.P. The Upper Peninsula is obviously part of the state of Michigan, but because it's so sparsely populated and separated from the rest of most people who live in the state, you kinda forget it's there unless you're looking at a map or are already in the habit of visiting the area. Apparently "Yoopers" are very proud of their insulated way of life, and I've heard that there's some sort of friendly rivalry between the Upper and Lower Peninsulas. Then again, I've lived in Michigan my whole and never met anyone who really cared that much, so I assume that whoever's participating in this rivalry must not have a lot going on in their lives. But I digress. 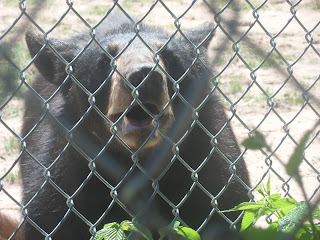 My main motivation for going to the U.P. was to visit the "bear farm", or Oswald's Bear Ranch, in Newberry. A high school friend of mine had recommended it to me, and I wasn't about to pass up the chance to witness a randomly-placed congregation of animals! Especially not such big and fluffy ones as bears. By some chain of events, a former Marine and his family began taking in bears and eventually they repurposed most of their land into a bear reservation. They live on the same property as the bears and have made raising them their life's work. 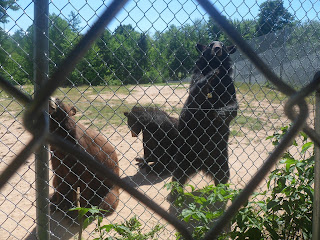 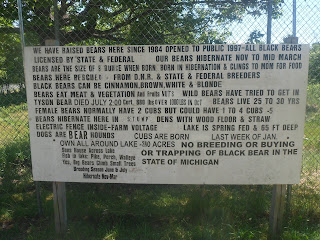 Like the Sleeping Bear Dunes climb, Oswald's charges per vehicle, and since there were more than one of us in the car it cost us $20 to enter. The lady at the entrance welcomed us and informed us that they currently had 38 bears on the property. They keep the cubs in one area, the yearlings in another, the adult females in another, and the adult males in another. If you'd like you can pay $10 to take a picture with the cubs, but neither Ma nor I were interested.

The yearlings were all very enthusiastic in front of people because they knew people meant apples! All except for one, a larger yearling who seemed uncomfortable in the heat and wasn't in the best mood. Whenever the other yearlings got too close, he or she would make a guttural bellowing noise which almost sounded like it was laughing, but the sound was actually a warning, "Git away from me!". The females were also pretty enthusiastic, sitting up and even standing up for apples like a couple of the yearlings had. From the female enclosure we followed a trail encircling the expansive property and came back around to the male enclosure. The males were fewest in number and had the largest enclosure out of all the bears, but they were also the most disinterested in people. With all the trees and foliage, it was hard to catch sight of them as they sought refuge in the shade. I left the bear ranch having learned one very interesting fact, which was that some black bears aren't actually black at all. According to a huge placard attached to the males' habitat, though some of the bears at Oswald's have brown or even light tan coats, all of them are of the same black bear species. 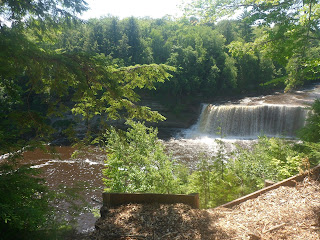 From Oswald's it was only a 20-minute drive to Tahquamenon Falls, a famous waterfall in a town called Paradise. Our original plan had been to visit Sault Ste. Marie and maybe even cross the border into Canada, but there didn't seem to much to see over that way, so we made a spur of the moment decision to see Tahquamenon instead. A Michigan recreation passport is required to enter the state park, and if you don't have one they'll give you one for $11. Once you enter the park, there are two main options for viewing the falls. At one end is the brink, and the stairway to and from the platform there is 94 steps. Most people go here because the stairway is shorter and the platform sits right atop the waterfall. The other viewing platform is further downriver at the gorge, with 116 steps and not as straightforward of a path. Ma and I took our time making it to both platforms. 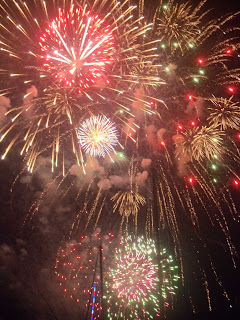 Though our introduction to the U.P. was rather short, we had to leave in order to give ourselves enough time to see the fireworks back in Mackinaw City. Every year, Mackinac Island hosts a Fourth of July firework show which can also be enjoyed from Mackinaw City, and we didn't want to miss it. To be quite honest, for Ma and me Independence Day is largely just another excuse to have a BBQ. Plus I'd been reading August Wilson's The Piano Lesson the whole weekend, and that combined with the sanitized Indigenous history posts I'd seen stationed around Mackinac Island and all the gift shops on both sides of the strait boasting Confederate flag items in their front windows had made a decidedly less-than-convincing case for me to be swept up in the holiday spirit. But hey, this was the main event of the day, so we figured why not go and enjoy it along with everyone else. 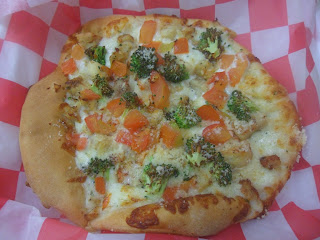 After resting for a bit at the hotel, Ma and I parked the car in the downtown area and walked the rest of the way to the marina, where we claimed a picnic table on the wooden deck between Shepler's Ferry and all the other boats docked there. From 7:30pm on, we watched the area around us fill up with people as the sun went down. The fireworks show started sometime between 10:30pm and 11pm, and though it didn't last as long as one would expect for such a highly-anticipated event, it was quite entertaining. When all the hubbub was over, we waited out the rush at BC Pizza and then returned to the hotel once the traffic had cleared. 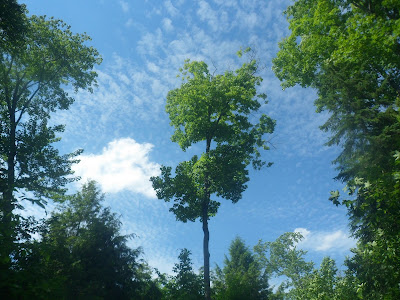