You may already know this, but my hairy, long-eared, sometimes compliant but often oblivious book model has recently taken up permanent residence on the other side of the rainbow bridge. As such, from here on out I'll try to be creative about taking pictures of my books with her urn. I read this play during my trip up north earlier this month right before she relocated, and so below will be the first of many book-and-urn photos. I know, I know, it's not the same and it's probably a little morbid. But hey.

Also, I know I'd said that things were looking up with An Untamed State, but it's highly likely that I may not reach my reading goal for the summer, much less the year. At this very moment I have six books that I've been trying to get through since spring, and for some reason only one of them has "stuck" so far. I might actually finish that one this weekend, but long story short is that my bookworm mojo has been way off this entire year.

The Piano Lesson by August Wilson 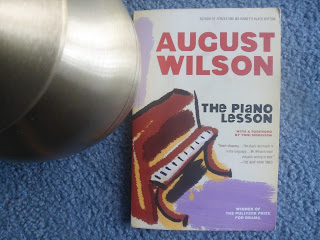 Possibly the most popular play in the Pittsburgh/Century Cycle next to Fences, The Piano Lesson is a ghost story in which a piano and sibling rivalry anchor an exploration of generational curses, African-American legacy, and the carrots of access and equity that keep being dangled just beyond our reach.

In 1936, Berniece Charles and Boy Willie Charles are siblings whose roots are in Mississippi. While Berniece, a widow, now lives in Pittsburgh with their Uncle Doaker the railroad worker, Boy Willie has stayed in Mississippi working as a sharecropper. That is, until Boy Willie arrives at their doorstep with his friend Lymon and a truck bed full of watermelons in tow. James Sutter, the grandson of the man who owned the Charles family during slavery, has passed away and his brother is now offering Boy Willie the chance to own the land that his enslaved grandparents and great-grandparents were forced to work. In addition to selling the watermelons to afford the land, Boy Willie has his sights set on selling the family piano that Berniece has kept in her possession. But this isn't just any old piano. Their great-grandmother Berniece and her son were sold in exchange for this piano, which Master Sutter had purchased as a birthday present for his wife.

But when said mistress began to miss these two favored slaves of hers, the master made great grandpa Boy Willie carve his own wife and son's images into the piano to console her. Great grandpa Boy Willie then turned this cruel order into art, taking the liberty to also carve his family's history of marriages, births, funerals, and forced separation. However, this act of remembrance and protest did not change who owned the piano at the end of the day. Even with the abolition of slavery and entry into the 20th century, Boy Charles (present-day Berniece and Boy Willie's father) was constantly  unsettled and enraged by the symbolism: so long as the Sutters owned that piano, they owned the Charles' history, and thus maintained ownership, whim, and coercive power over the Charles family. So he stole it and hopped a train out of town! In retaliation, someone cornered him in a boxcar and set him and everyone else inside on fire, thereby extending the back-and-forth between the two families into the supernatural realm. You see, in the present day of the play it is rumored that the ghost of Boy Charles and the other victims pushed James Sutter down a well to his death. And now Berniece, Uncle Doaker, and eventually Boy Willie are haunted by the ghost of that same newly-deceased Sutter descendant.

Understandably, Berniece refuses to part with the piano because it is sacred. She and her brother battle throughout the play over who has the most say in the matter, with the major question being, who will get their way in the end?

Brother wants to move on from the past and sister wants to hold onto it, but it is my impression that both siblings are ashamed of what the piano represents to a certain extent. Berniece is ashamed of all the pain and trauma her family went through, and views the knowledge of their past as a burden that her pre-teen daughter Maretha shouldn't have to carry. Which is why, though she lets her daughter play the piano, she doesn't tell her how they got it or what all of the carvings mean. It is as if by not addressing this tragically dark part of her history, she hopes it might just shrivel away quietly. Boy Willie on the other hand isn't so much ashamed of the story behind the piano, but rather the hold that the piano still has over his family. He feels that his father's work is yet unfinished, that his sister's dual senses of obligation and avoidance toward the piano are proof of the Sutters' enduring undue control over them. Rather than letting the past hold him back or pretending that it didn't happen, he wants to turn it into something new. Exchange it for currency and then exchange that currency for the very land his family was enslaved on. Acquire land, reclaim his family history, and thereby achieve status as a property owner that's equal to any white man's, and never have to abide by anyone trying to keep him under foot again. In short, their family history is somewhat of a hindrance to both of them, but the ways in which they respond to it and approach the future are vastly different.

Writing this review has been extremely challenging for me, not only in regard to accepting the absence of my book model, but also in regard to how The Piano Lesson puts the heritage of every Black American in perspective. Or the heritage of any person of color directly or indirectly disadvantaged by colonialism, quite frankly. Having to put my understanding of the play into words three weeks after having read it, I am just now realizing what a powerfully resonant gift August Wilson has given us. Whether by lineage, shared family name, inherited social status, family heirlooms, disputed property, or legacy, descendants of former slaves and former slaveowners are more closely connected to each other and  the rollover consequences of slavery than many will admit. This was true in 1990 when The Piano Lesson first earned widespread acclaim, and it is true still in 2016. So when we find ourselves haunted by the ghosts we've inherited, what do we do?


"You trying to tell me a woman can't be nothing without a man. But you alright, huh? You can just walk out of here without me─without a woman─and still be a man. That's alright. Ain't nobody gonna ask you, 'Avery, who you got to love you?'... Everybody got all kinds of questions for Berniece. Everybody telling me I can't be a woman unless I got a man. Well, you tell me, Avery─you know─how much woman am I?" (67).

"Got these big old hands capable of doing anything. I can take and build something with these hands. But where's the tools? All I got is these hands. Unless I go out here and kill me somebody and take what they got... it's a long row to hoe for me to get something of my own. So what I'm gonna do with these big hands? What would you do?" (91).

"Hell, the world is a better place cause of me... I got a heart that beats here and it beats just as loud as the next fellow's. Don't care if he black or white. Sometime it beats louder. When it beats louder, then everybody can hear it. Some people get scared of that. Like Berniece. Some people get scared to hear a nigger's heart beating. They think you ought to lay low with that heart. Make it beat quiet and go along with everything the way it is. But my mama ain't birthed me for nothing. So what I got to do? I got to mark my passing on the road. Just like you write on a tree, 'Boy Willie was here'" (94).