Oh do I love when an author pulls a well-timed and carefully orchestrated switcheroo! They lead you to believe their book is about a familiar and palatable subject, when actually it's about a much deeper, more obscure, and more complicated issue (Song of the Exile). Or in this Dutch novel's case, they shroud you in so much mundane banter and comical cynicism that you're almost willing to overlook the underlying darkness until - surprise! - said darkness envelops the entire plot. Another novel that I didn't expect to enjoy but which proved me wrong.

The Dinner by Herman Koch 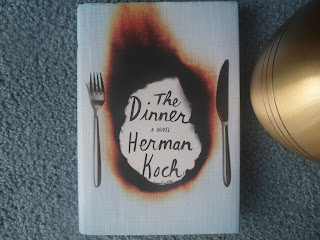 In Amsterdam, four members of the same family meet for dinner at an upscale restaurant. The dinner party consists of brothers Paul (a former teacher and pretty average guy) and Serge (a popular politician vying to be prime minister of the Netherlands), and their respective wives Claire and Babette. Divided into courses ("Aperatif", "Appetizer", "Main Course", "Dessert" and "Digestif"), the entire novel takes place in Paul's head as he narrates in past tense the play-by-play of what happens at the dinner. All the while he also alternates between various prior events or personal frustrations that reveal not only his own personality, but the dynamics and tensions of the entire family.

Before dessert, most of the novel is actually quite funny. Paul takes his time snarking about how full of crap his uppity brother and all the other perceived morons and posers around him are, and I kind of love it. A lot. To witness someone being so internally straightforward about their disdain for a fraudulent relative is perhaps way more amusing than it should be. I caught myself almost wishing that I had a sibling so I could relate. He plays it cool during dinner (as he does in most situations), but on the inside he's seething, pinpointing the hypocrisy in everything and wanting nothing more than to see phony and unintelligent people fall apart in the most public, uncomfortable, ugly and disastrous way possible. Paul is angry and arrogant, but he's also incredibly troubled and insecure. Which means that when the time comes for someone to actually tear everything apart, it's no colossal surprise that Paul isn't the one to do it.

Eventually dessert arrives, as does the real reason for this meeting. Each couple has a teenage son, and these two cousins apparently record themselves terrorizing homeless people for fun. One of their escapades became a national scandal, as they were caught on security camera abusing a homeless woman and setting her on fire. Fortunately for them no one recognized them in the footage except for their parents, which begs the question now: to publicly out their sons or to continue to hide the truth? Herman Koch sets us up to at first understand both couples as relatively reasonable, mild-mannered, intelligent, and cultured people. But when they have to face a real problem such as this which necessitates definitive action, action borne out of accountability and personal sacrifice, their facade cracks. And so then readers get some shocking insight on the dreadful extremes to which some people will resort in order to cover up for their children, especially if they have the money, social standing, or complexion for the protection to do so.

And Koch is brilliant because he gives us so many clues! In the moment you know you're reading something important but maybe don't know how it'll be pertinent to the major conflict at hand until everything unravels at the end. One clue, which will later provide some commentary on this family's horribly bizarre and self-serving behavior, is Paul's argument about the nature of innocence. Once a history teacher, he essentially got fired for supposing that not all victims in WW2 were innocent. While they certainly did not deserve to be victimized the way they were, that's not to say they were wholly innocent, good, or even likeable people before that point. And perhaps there were people who'd known them who were secretly happy or relieved to see them gone. This sounds extremely callous when speaking in regard to casualties of WW2, but would people care as much if a victim were, say, a homeless person sleeping in a public place where they didn't belong? Or a haughty politician who puts on airs and assumes he has an election in the bag? Or a teenager who blackmails his adopted brother and cousins? Or a convicted murderer or rapist who just got released and may possibly commit again? Or a murder or rape suspect who may not have even stood trial yet?

As upright as Paul, his wife, his brother, and his sister-in-law purport to be, they betray their true selves by making arbitrary and subjective distinctions between who's civilized and who's uncivilized in a modern society, and the value that they attribute to certain people's lives differs vastly. They make allowances for their children, while at the same time supporting execution (with or without trial) for the so-called "real" criminals, the "worst kind of human beings". That their kids killed a homeless woman who was in their way is viewed as evidence of immaturity, not criminality. If violence is used to serve their own interests it's fine, but when used by others in any other instance, it's unacceptable.

Ultimately it's decided that what happens within the family stays within the family. However, in this sense it's not about the family as a whole but rather about the security of one couple and their kids. The other couple is discarded and the things they value are sacrificed as it suits the definitive actor in this situation, which probably won't be who you think it is. Let's just say the ending is too good, but in a really sickening and almost unfathomably conniving way. Definitely read The Dinner if you're into satire, a little dark comedy, debates on social issues, and family dysfunction!


"It was remarkably calm. Calm and fatigued. There would be no violence. It was like a storm coming up. The café chairs are carried inside, the awnings are rolled up, but nothing happens. The storm passes over. And, at the same time, that's too bad. After all, we would all rather see the roofs ripped from the houses, the trees uprooted and tossed through the air... we've all been taught to say that we think it's terrible. But a world without disasters and violence─be it the violence of nature or that of muscle and blood─would be the truly unbearable thing" (183-84).