"You Are My Quest" - Kubo and the Two Strings

This is the film that I'd mentioned seeing with my friend Irene last week. The last movie we went to see together was Big Hero 6, another animated film that boasts obvious Japanese influences and a teen or pre-teen Asian boy as the lead character. Unfortunately Kubo (produced by Laika, the innovative smaller-scale production company that gave us Coraline) hasn't received the same hype as BH6 did, but it is no less worthy of favorable buzz. If not a blockbuster turnout, this film at least deserves a sizable viewership of people who will take it to heart.


Kubo is a young but intuitive boy who makes origami figures come to life with the power of his mind and his shamisen-playing skills. He's the primary caretaker of his mom, who suffered a brain injury while braving storms and high seas fleeing from her father and sisters who want to destroy her son. It is revealed that Kubo's mom is actually the daughter of the otherworldly Moon King, and she broke rank when she decided to marry and have a child with a human, a samurai. Their familial past catches up with them and Kubo ends up parentless, but he's then accompanied by a stern talking snow monkey and a scatterbrained beetle man on a quest to find the magic sword, breastplate, and helmet that will help him defeat his family's cruel intentions for good. 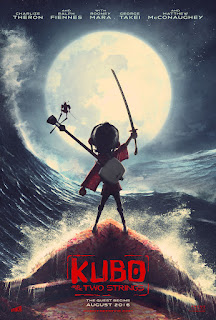 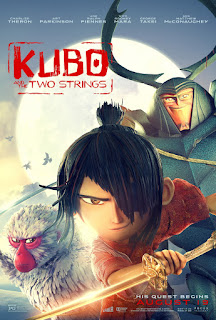 What I really like about this film: Everything. I know I tend to say this about every film that I happen to thoroughly enjoy, but there's literally nothing I don't appreciate about this film. Simpler but intricate lighting, painting, stop motion and puppet animation methods were used to create a stunningly folkloric aesthetic with modern appeal. The Edo era Japanese-ness of the fantasy setting was clear without the film having to spell out that, "This is supposed to be Japan!". The shamisen being played in the score was prevalent and poppin'. And what the title of the movie represents in relation to the plot is so satisfyingly clever! I won't ruin anything, but basically Kubo is a lot less alone than what he's led to believe. Prepare to at least tear up a time or two.

Always looking for a reflective moral or lesson, I find it both inspiring and humbling to see the tremendous respect that the film places on memories, stories, spirits, and humanity. Memories give us strength and power and keep us safe. Stories shape our character and help us live on in the hearts of others.The question of "Why be mortal when you could be immortal?" or, "What's so good about human beings, anyway?" is raised a couple times, and eventually the conclusion is reached that the various oddities and shortcomings of the people who create said stories and memories, as well as the bonds formed between people living and no-longer-living, are what make humanity valuable.

What I don't like about this film: This is just a little thing that I was unclear about, as I understand neither the full implications of traumatic brain injury nor the intentions of the filmmakers. Kubo's mom sits up in a comatose state from sun up to sundown, has a few lucid hours at nightfall, and then slips away again just before bedtime. I wondered why this was. Irene and I supposed that since she is the Moon King's daughter, perhaps her consciousness and powers are only awakened at night? I honestly still have no clue. But other than that, the inconsistencies in this film are few and far between.

Would I recommend it?: YES! Yesyesyesyesyes! Go for the fantasy and adventure, stay for the emotional hardship and healing. At least that's what I did, and you see what my reaction's been!
Posted by Deela (Danielle G.) at 12:32 PM