The summer 2016 broadcast season is well underway in Japan (with considerably more interesting options than previous seasons, if I might add)! I've already started watching most of my selections for the summer, but before too much time gets away from me I want to write about the two dramas I watched during the spring. I watched most of 'Love Song' with Japanese subs, and I watched 'Kyou wa Kaisha wo Yasumimasu' with English subs. 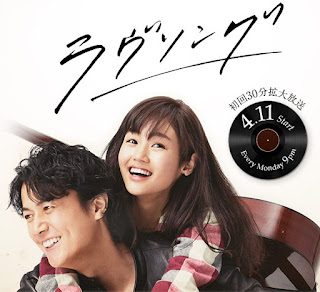 Sano Sakura (Fujiwara Sakura) is a 20-something mechanic who's stuttered her whole life, which has often made communicating with people difficult and stressful. For fear of being humiliated and misunderstood, she generally avoids social interaction except for with co-workers, her boss, and her two best friends, both of whom are her roommates and grew up in the same orphanage as she did. When one of her best friends who's been like a protective sister to her announces that she's pregnant, engaged, and moving out, Sakura realizes that she can't rely on her friend to communicate with the world for her anymore. She becomes determined to gain greater control over her speech impediment not only so that she can participate in everyday conversations and function independently, but also so that she'll be able to successfully deliver the wedding speech that her friend has asked her to give.

That's where Kamishiro Kohei (Fukuyama Masaharu, 'Galileo') comes in. The in-house therapist at Sakura's automotive company was previously the guitarist and songwriter for a one-hit wonder of a band 20 years ago, but their career fizzled out when the lead singer (also Kohei's girlfriend at the time) passed away. Sakura resembles his late girlfriend in age, singing voice, budding artistry, and purity of heart, and what starts as music therapy to overcome her stuttering evolves into his attempt to help her establish a music career out of guilt for having failed to help his former girlfriend see the success she deserved. Sakura doesn't know that part at first, though.

And of course, since Sakura's a young woman and they spend a lot of time together and share mutual passions, because Kohei's always concerned with her progress and well-being, and because he's a grown man with grown man charm (no matter how inadvertent), the line between patient and therapist/mentee and mentor gets blurred and she falls in one-sided love with him. Most of the plot seems like it will trace Sakura's unlikely journey from obscurity to stardom, which somewhat parallels the actress's own journey. (Fujiwara Sakura was an experienced but still growing indie singer before being selected from hundreds of girls to lead this highly-anticipated hit show, co-starring with Fukuyama Masaharu, Japan's younger and musically-inclined equivalent to George Clooney). A cute, humble, young woman mechanic with a stutter becoming a successful singer-songwriter and overnight sensation? That's a fascinating story that I would've liked to see played out! But during the last couple episodes the plot instead focused on the necessity for Sakura to separate herself from her complicated feelings toward Kohei, and rather use what he's taught her to find her own voice and establish her own path in life. I'm not sure if this was the plan from the beginning or if the direction of the show was re-written during production, but considering the pressure young women often feel to depend on or acquiesce to older men in order to make it in entertainment, I appreciate how the show ended more than I might have otherwise. 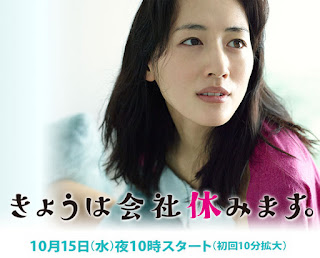 As a stand-in to bide the time between finishing 'Love Song' and waiting for the summer season to start, I picked this drama because I came across its theme song through an old J-pop countdown on YouTube, and it was jammin'! "Fall" by Makihara Noriyuki. Give it a listen and thank me later! This show is up there with 'Hanasaki Mai ga Damatteinai' on my list of Dramas That Were Extremely Popular for Reasons That are Beyond Me. Like 'Hanasaki Mai', 'Kyou wa Kaisha' was met with considerably high ratings, and I don't quite get it. I think my confusion comes from the fact that the show's premise isn't as big of a deal here in the States as it is in Japan. A reserved office worker has her first relationship at age 30 with a co-worker 10 years her junior, and she makes everything a big deal as they figure themselves out together.

Aoishi Hanae (Ayase Haruka) is a meek and straight-laced woman who's never had a boyfriend nor taken a day off work until her 30th birthday. On that day, her 21-year-old co-worker Tanokura Yuto (Fukushi Sota, 'Starman', 'Koinaka') expresses interest in her and they end up sleeping together. The next morning she's so freaked about what they've done and what it might mean that she takes a day off to cool her head (and avoid the walk of shame to the office). From there, Hanae and Yuto begin a secret relationship that is very earnest, adorable and loving (and kind of hot for them and some viewers, I guess; you know, forbidden May-December office romance and all). But it's also rife with awkward moments and misunderstandings because of differences in their age, dating history, and life goals. At the same time, the 40-something new CEO of their office's business partner also takes interest in Hanae. Sometimes he's tolerable because he offers her work and relationship advice, but most of the time he's terrible because he's always butting in to tell both Hanae and Yuto that he's the better man for her.

I suppose this show's appeal comes from the role reversal. A man taking up with a younger woman is pretty common and almost expected, given how often women's value is measured by their physical beauty, ability to reproduce, and willingness to attend to men's whims, all of which are conventionally associated with youth. But a woman dating a younger man is more unusual, unwise, somewhat taboo or even scandalous. What will you do in the future? How will he provide for you as a husband? What do you even have in common? How will your family ever approve? Thankfully, almost everyone around Hanae gives her space to decide for herself, and no one makes her feel like a deviant for her choices. Overall 'Kyou wa Kaisha' is an easygoing show with enough conflict to keep it from being boring. A very pleasant show with no frills that you can get through easily.

The winner this time is 'Love Song' without a doubt. It gives attention to a common disability, it displays the healing and collaborative power of music, it's been Fujiwara Sakura's big break, and her cover of Peter, Paul and Mary's "500 Miles" ("500 マイル") is one of those folksy insert/theme songs that tugs at my nostalgic heart. Job well done to everyone involved with this show.
Posted by Deela (Danielle G.) at 9:49 PM