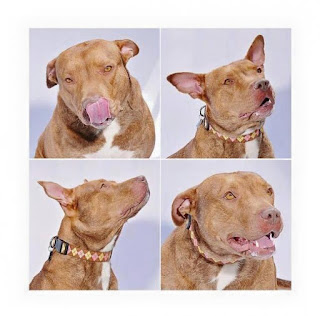 Two weeks ago today, Ma and I adopted a dog. Said dog's mere presence in this house is a testament to the adage that one should never say never. Here I am, less than three months after the heartbreaking loss of my childhood dog (I thought I'd need an entire year to even consider getting another one), having adopted a pit bull mix (Ma swore that she would never allow that breed into her house), who bears a name that I never would have chosen for my own child, much less a dog (it's a pretty name but too common and girly for my liking). But what do you know? Meet Julia, the pibble (Staffordshire bull terrier + shepherd, approximately). 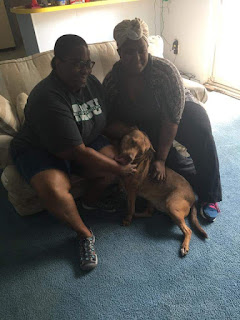 We met her at a pet adoption event at the Detroit Zoo. We'd been looking into adopting for a month or so, and at first I was certain that I wanted another hound. But then I broadened my criteria to any medium-sized dog that was thick in the middle and had a distinctive look and/or had at least one "ugly cute" feature (wrinkles, droopy eyes, skin folds, etc.). Funny enough Julia was actually the first dog that we saw when they opened the event to the public that Saturday morning, and after walking through all the tents Ma and I took a liking to about four other dogs (all pit bulls, go figure), but we kept coming back to her. Detroit Animal Welfare Group (DAWG) informed us that she has a past and emphasized that she is not good with other animals (especially dogs, she's not so much "aggressive" as she is "reactive"). But they also emphasized how loving she is and that all she wants is to be loved and feel safe. I saw how chill, chubby, and friendly she was in the pink kennel they had her in, and for some reason I had an unshakeably good feeling about her. So I applied to adopt her, DAWG scheduled a home visit with us, Ma and I spent the rest of that day cleaning, and the next afternoon DAWG was at our front door with Julia in tow. They must have approved of us and our house, because two weeks later and she's sleeping behind my chair as I write this. 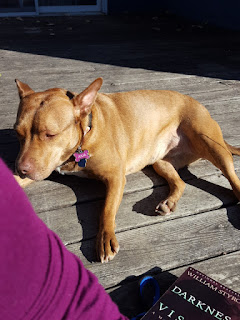 We are beyond happy to have Julia around, but that's not to say that things weren't awkward at first. Julia had been so used to the rescue people that she moped around looking and waiting for them the first day after they left. As for me, as determined as I'd been about being ready to adopt I was (am?) still grieving Madison, so I wasn't head-over-heels for Julia and I had difficulty being able to look at her and acknowledge wholeheartedly, This is my dog. Thankfully after the the third day or so we warmed up to each other, and now she follows me everywhere and never misses a chance to get in my face. And I got used to her name (I don't know who named her "Julia", but DAWG had had her for nearly her entire 2-ish years of life, and she meant so much to them that I didn't bother trying to change it).

Based on our initial fortnight together, I can tell you a few things about my new dog.

She is: "A chunk of love" as DAWG ppl called her (chubby pup who's very affectionate with humans, though not so chubby anymore), eager to please (most of the time), inquisitive, and a dog that knows what she wants and what she doesn't want.

She is not: A morning dog, a running buddy, noisy (only barks when she sees other dogs or if other dogs bark at her first, snores very lightly in her sleep), or too proud to play possum for belly rubs.

She likes: Tearing up soft squeaky toys, staring out the front door and window at passersby, rolling around in grass, going outside for no reason, going on walks, riding in the car, licking whatever human skin she can make contact with (especially faces), lying around, sleeping, pretending she doesn't hear us talking to her (not all the time), and belly rubs.

She dislikes: Other dogs, eating on a regular schedule, being prompted to move when she doesn't feel like it. 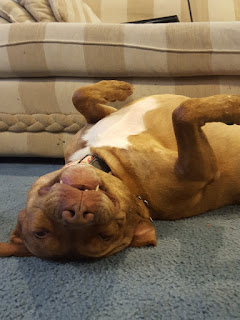 So far so good. The transition has been smoother than we anticipated in a delightful way. Thanks to Ma for seeing how broken-up I was over Madison and mentioning the idea of getting another dog in the first place. Thanks to the Detroit Zoo and the Michigan Humane Society for holding their annual event. Thanks to DAWG and especially Janet and Natalie for walking us through the process and being so informative and supportive. Thanks to Julia for becoming my new best friend. And thank you Jesus for making it so I don't have to be so lonely anymore.

For more pictures of Julia up 'til now and to come, check out this album: