"The small one can become the big one" - Queen of Katwe

While it is tempting to be unnerved by an actress of Lupita Nyong'o's multi-faceted artistic stature playing yet another long-suffering black woman in a major film, she is such a phenom, transfiguring characters on paper into flesh and blood before our eyes, that I can't even be mad. This is not a proper introduction but it's the first thought that came to mind when sitting down to write about this film.

In Katwe, within the city of Kampala, Uganda, Phiona Mutesi is a pre-teen girl who spends her days selling maize in order to help support her family, which includes her widowed mother and three siblings. When her brother Brian starts skipping out on selling to slip away, Phiona follows him to the one-room school house where a gaggle of intelligent, competitive, wise-cracking kids are taught to play chess by "Coach" Robert Katende, the activities coordinator at a local church ministry. Phiona joins and eventually becomes the winningest player in the club, which Robert affectionately calls "The Pioneers". As her talent takes her to national and international tournaments, Phiona begins to envision a broader future for herself, but is wisely cautioned from bearing disdain for the impoverished place and people who have shaped who she is. 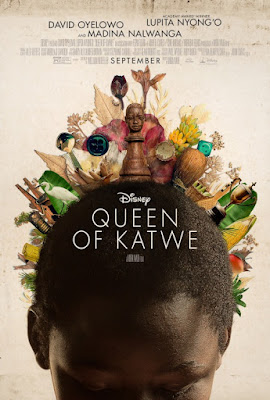 What I really like about this film: Though it is a sports drama film, it's not another one of those cheap "let's save the blacks through sports" movies that Western audiences seem to be so enamored with, in which championships are won and brown-skinned people must transcend themselves in order to be somebody. The cast is abundantly African, most of the characters are abundantly poor, and though the kids learn to play chess competitively, it's not all about winning or earning a certain status. Robert challenges the kids in order for them to gain self confidence, develop critical thinking and problem solving skills, learn about themselves, and bow before no one, no matter where their competitors come from or what social status they may have. There is no glory in it from him. Phiona, like the other Pioneers, is given the space and encouragement to explore, make mistakes, and go as far as her skills and curiosity will take her, but she is never pressured to do anything that will ultimately serve the adults around her more than her. She puts her all into become a masterful chess player simply because it makes her feel smart and powerful, and the hometown hero status is just a bonus.

I also appreciate that Queen of Katwe keeps it real in terms of the limited options that women and young girls like Phiona, her mother (Lupita Nyong'o), and her older sister face. Young, poor, and without a man in the house, they must either sell goods to survive or try their luck at getting a man to provide for them. For some like Phiona's sister Night, the costs of dependence, isolation, exploitation, and ultimately abandonment are too high, but they have to learn this the hard way. For others, like Phiona's family's landlord, being "kept" is a fact of life that any woman should be prepared to do at least once. And some women, like Phiona's mother, are too proud to yield to such advances. Regardless of the choices that each of these characters make, the film doesn't shy away from the fact that women and girls of a certain age in circumstances like these face unwanted attention and the pressure to yield to men on a daily basis, and accepting it in order to survive is sometimes less than a choice.

Lastly, the end credits of the film left me feeling all warm and fuzzy inside. As each character is presented, the real-life person is shown standing alone, and then the actor who plays them walks in and stands beside them. Both stare into the camera seemingly oblivious of each other, and then they drop the act, turn, and embrace each other like old friends greeting. Some of the pairs are even dressed alike and color coordinated! It is such a sweet series of moments. Normally with "based on a true story" films like these you might get a few photos and a couple blurbs during the ending credits letting you know what happened to the real-life person. But to see every single one of the major characters alive, to witness African people taking part in a film that was made about their stories, and being seen by masses of filmgoers? With the actors honoring them, face to face? Lord have mercy, I almost cried.

What I don't like about this film: Nothing. I find chess to be over my head and extremely boring, and I was still fascinated by this film. Go see it and be inspired. That is all.
Posted by Deela (Danielle G.) at 9:02 PM