Admittedly I'm out of my depth with this one. I know nothing about Miami, and though I know more about the LGBTQ community than I did even a year ago, I still know nothing personally of the lived experience of being gay. One of my favorite podcasters Xavier D'Leau (from Jade & XD) briefly reviewed the film but wasn't impressed by it, quipping that (and I paraphrase), "This is a gay movie made for straight people", which I can somewhat understand. He also said you'd have to be really smart to get what the film's angle is, and perhaps this is one of those moments where I'm not so smart, since I feel like something significant went over my head. Which is to say, I'm not sure that I took away from it all that I was supposed to. But here goes.


A journey through the childhood ("Little"), adolescence ("Chiron") and early 20s ("Black") of a young black man named Chiron coming of age in Miami. Growing up poor and practically having to raise himself as his single mom sinks into a crack addiction, Chiron manages to find tenderness in unexpected people and places. While his circumstances and cruel peers bully him into being hypermasculine, those moments of tenderness and refuge allow him to explore his sexual identity along the way. 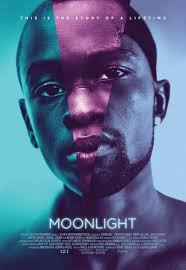 What I really like about this film:  Mahershala Ali getting shine as a featured character. No matter what I see him in, even if he's playing an intimidating or no-nonsense person (see his role in the final two Hunger Games movies), his face is so full of warmth, wisdom, and kindness. It's completely possible that he's wretched on the inside and is just that adept of an actor, but for me he's one of those actors whom you want to believe is a good person in real life. His dual ability to play hard and soft at the same time is reflected in his role as Juan in Moonlight. He's a drug dealer who doesn't play about his business, but as Chiron's father figure, can only bow his head and shed a tear in shame when confronted by this child whose mother is addicted to Juan's product. Also, the scene where Juan teaches Chiron how to swim in the ocean is divine. The scene appeared to be a baptism in the film's trailer, and in the film itself there is still something tender and holy about that moment.

The lighting. The colors. The contrast. A fantastical world sprouting from the hood. I wish I had enough film studies vocabulary to explain what I mean, but I can't. Watch the film and you'll see what I mean.

What I Don't Like About This Film: This is actually part of the genius of the film rather than something I dislike, but I feel like we never truly learn who Chiron is as a person. We know all of his nicknames, we know the people who make and break his world. We know he's got a tenderhearted soul on the inside, but who is he? One could argue that it's not even clear what his sexual orientation is. Obviously he's had same-sex feelings and encounters, but would Chiron necessarily identify himself as a gay man? From early on, numerous people remind him that he's gay or somehow not masculine enough and that he should expect to be mistreated for it, but this is long before he has the chance to examine himself or even know what a "f*gg*t" supposedly is. He is drawn to his classmate Kevin, but is this because he's attracted to him specifically or because Kevin's the only person his age that's kind to him? Upon their reunion as adults, is the intimacy they share in the final scene a lovers' embrace, or a pair of long-lost friends holding each other up? Perhaps I'm too straight and inexperienced in matters of the heart to properly appreciate the subtleties. But my impression is that at the end of Moonlight, Chiron is just on the threshhold of being able to express himself as an unencumbered adult.