Sometimes you just need a book to pass the time, something you can get through relatively quickly, and these two are such books. I wasn't head-over-heels with either of them, but their authors are well-respected (a Nobel Prize winner and an Akutagawa Prize winner, respectively) and they each make interesting points about serious topics, namely religion and politics. I found the first book at a used book sale, and I ordered the second one online when its film adaptation was released earlier this year.

Diary of a Bad Year by J.M. Coetzee 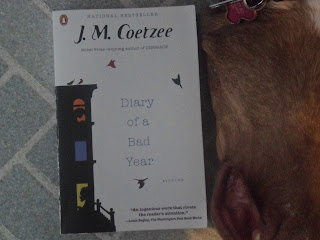 I was assigned to read Coetzee's Booker Prize-winning novel, Disgrace, as part of my senior seminar in college and I LOVED it. It disturbed me greatly and brought to my attention how post-colonial (post-apartheid) eras manifest still newer forms of racial and political violence. Coetzee gives us something comparatively lighter in Diary of a Bad Year, but it's still somewhat serious.

Señor C is a character loosely based on Coetzee himself (renowned yet reclusive South African novelist who has relocated to Australia to spend the latter half of his life). He's been commissioned to contribute essays to a German anthology of high-minded ideas, so to speak, and hires his upstairs neighbor named Anya to be his typist. His initial intentions are neither pure nor selfless (he basically hires her because she's hot, and will hopefully inject some beauty and companionship into his solitary life; be his aide and his muse), but he never acts on his longings. The half-Filipino daughter of a former diplomat, Anya's incredibly intelligent but has chosen to skate by on the art of playing dumb, letting wealthy know-it-all dudes entertain her and buy her things because, why not? Her current wealthy know-it-all partner is Alan, an economist who left his wife for Anya and is in the midst of a midlife crisis. He's simultaneously proud and jealous of any male attention  that Anya gets, and plans to use his skills to steal all of Señor C's money simply because he can.

Set in 2005, part one of the book contains Señor C's "Strong Opinions", his commissioned essays on various political concepts and current events. Part two contains his "softer opinions", more personal topics which Anya has encouraged him to write about. What's most interesting about Diary of a Bad Year, though, is how it's organized. Each page is divided into 2 or 3 voices, with Senior C's writing on top, his personal thoughts or dialogue in the middle, and either Anya or Alan's (mostly Anya's) thoughts or dialogue at the bottom. Sentences seldom carry over to the next page, so the sections can be read straight across or from top to bottom. I probably wouldn't read this book again, but it's organized in a very unique way that allows the story to contain action and subplots rather than just a collection of one man's opinions. If you enjoy reading essays and care to revisit what the Western/Australian/South African political climate was like in 2005, read this novel.


"As long as there is not one of us who has the faintest idea of how to go about constructing a housefly from scratch, how can we disparage as intellectually naïve the conclusion that the housefly must have been put together by an intelligence of a higher order than our own?" (83).

"Barriers are simply overrun, obstacles shoved aside. The nature of water, as the pre-Socratics might have said, is to flow. For water to be puzzled, to hesitate even for an instant, would be against its nature... fire is never satiated. The more a fire devours, the bigger it gets; the bigger it gets, the more its appetite grows; the more its appetite grows, the more it devours. All that refuses to be devoured by fire is water. If water could burn, all of the world would have been consumed by fire long ago" (215). 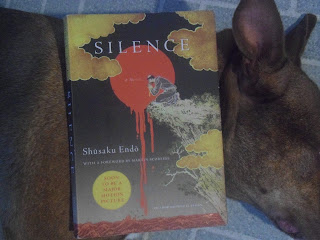 At a time when Christianity has been deemed a political threat and forbidden in Japan, officials in Nagasaki are notoriously zealous about rooting out and torturing hidden Japanese Christians and foreign priests. In the 1640s, the Catholic church in Rome learns that the venerated priest Cristóvão Ferreira (based on the real-life Portuguese missionary of the same name) has renounced the faith after being tortured in Japan. Three other Portuguese priests, former students of Ferreira, go to Japan to investigate what happened. Two of them actually make it, and are sheltered by peasant villagers on Kyuushuu island before eventually being captured. One of them, Sebastian Rodrigues, is the main character in the story (based on the real-life Italian missionary, Giuseppe Chiara).

I guess I'm supposed to feel sorry for Rodrigues, but his white savior-ism gets in the way even despite his noble intentions. He seems to care more about the glory of being a missionary and a martyr than the work; often comparing his persecution to the time when missionaries to Japan were supposedly treated as honored guests. He naively underestimates how difficult his task will be and how many locals will be implicated, putting locals at risk even by his mere presence and not being careful enough not to incriminate them. He's also notably obsessed with his imagining of the (erroneously blue-eyed, very European-looking) face of Christ, and has an inflated sense of self-importance as if Christianity will be doomed in Japan if he himself isn't successful.

However, Rodrigues' humbling struggle with his faith is what redeems him as a character. The Nagasaki officials' goal is to make him apostatize by stepping on an image of Jesus or Mary (fumie), even if he doesn't mean it. Japanese Christians are punished more severely the more that he resists. As he's imprisoned, interrogated, paraded for public humiliation, and forced to witness Japanese Christians die because of him, he repeatedly questions why God doesn't intervene, which transcends into questioning his own purpose as a missionary, and questioning his belief in God as a whole. The  Japanese title of this novel (沈黙, Chinmoku) means not only silence, but inaction, emphasizing the sense that God not only is saying nothing, but also sits by watching, doing nothing. As the symbolic Jesus character in Silence, Rodrigues grapples with an internal crisis and contends with what acting in love really means. By doing the unthinkable, his act of sacrifice would imitate Christ (protecting others from suffering) but would also scandalize the Church (renouncing the faith).

Silence is actually quite thought-provoking, especially with its arguments about the role of Judas and how his betrayal (and by extension, all human weakness) is essential to the story of salvation. That said, I probably wouldn't be in a rush to read it again soon. It's just... a lot. Plus it dries out a little at the end. Read it because it's a classic, that's all I can say.


"But I have my cause to plead! One who has trod on the sacred image has his say too. Do you think I trampled on it willingly? My feet ached with the pain. God asks me to imitate the strong, even though he made me weak. Isn't this unreasonable?" (122).