BOOKS! (The Immortal Life of Henrietta Lacks + One Day We'll All Be Dead and None of This Will Matter)

Today I've got two books that focus on women of color (what else is new!). The first is a used book sale find which was also a mainstay on the school reading displays at the bookstore where I used to work. The other is a funny book of essays that was highly recommended by Tracy from the Another Round podcast. Let's get to it!

The Immortal Life of Henrietta Lacks by Rebecca Skloot 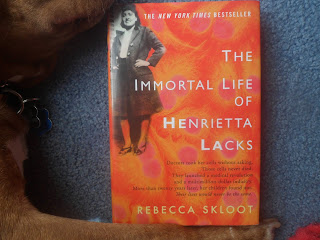 Born in rural Virginia and living in Baltimore, in 1951 Henrietta Lacks went for treatment at Johns Hopkins where she learned that she had cervical cancer and a handful of other previously-untreated conditions. She eventually died of the cancer that same year. During her treatment and after her death, cancerous cells were taken from her body by a small team of Johns Hopkins researchers who found that her cells multiplied more quickly and for a longer period of time than any other cells they'd studied in their lab. They were, in fact, immortal (still multiplying as I write). The team bottled away collection upon collection of her cells, which were shared with other researchers and used to understand DNA, study disease, and even develop treatments for various illnesses. After her cells were commodified, a handful of research groups and biomedical companies even made fortunes off of them. But here's the problem: Henrietta and her family never consented to have her cells taken and used for such purposes, they never knew that any such research was going on, and they never received a single cent in exchange for what has since been euphemized as her "cell donation". Having first heard about Henrietta Lacks as a high school student in a community college, scientist and journalist Rebecca Skloot reached out to the family in 1999 and eventually gained their trust, working closely with Henrietta's daughter Deborah to research and write this book.

I'd originally expected this to be a scathing exposé that would stick it to all the people who benefited from Henrietta's body without consulting her or her family. But it's not that kind of book. Skloot does reveal a lot about the norms of scientific research, the progress of informed consent and patients' rights laws, and America's history of using black bodies to conduct research often without consent or sufficient compensation. But rather than a concerted effort to go after the bad guys (so to speak), it's more of a well-rounded approach to informing people about Henrietta Lacks' contribution to modern medicine and explaining all the players and issues involved.

I'm still trying to not be incensed by the sense of entitlement that medical professionals were quoted as having, especially in relation to Johns Hopkins which was built to serve the city's poor, orphaned, and similarly disadvantaged. Their sentiment basically boiled down to, We (conveniently white) doctors treat these (conveniently black) patience for free anyway, so what's a few cells from them? They practically owe us. There was also the sentiment that, We're using these cells to advance science which benefits everyone, and asking people for consent for every single thing will just ruin everything. Business is being made of our bodies whether we're aware of it or not, and patients or "donors" can't really do anything about it. (Granted, sometimes we do give our bodily materials away, à la ancestry-related DNA testing and whatnot.... Whoops.) It's obvious that Rebecca Skloot wanted to make this story accessible to as many different readers as possible, so despite usually avoiding science books, I was able to get through this book fairly quickly while still learning a lot. For the sake of being better-informed patients, everyone should read this book.


"But those patients had one thing going for them that Henrietta didn't: They were alive. And the dead have no right to privacy—even if part of them is still alive" (211).

"She appears to be screaming. Her head is twisted unnaturally to the left, chin raised and held in place by a large pair of white hands... No one spoke. We all just stood there, staring at those big white hands wrapped around Elsie's neck. They were well manicured and feminine, pinky slightly raised—hands you'd see in a commercial for nail polish, not wrapped around the throat of a crying child" (273). 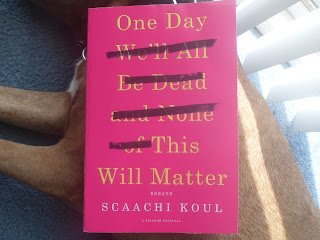 I'd never heard of Scaachi Koul before Tracy from Another Round mentioned this book of personal essays (I can't remember if she mentioned it on Twitter or on the podcast). And then I was in the book store after work, looking for something fun and light to read, and O.D.W.A.B.D.A.N.O.T.W.M. was on display. The last book I recall reading by a Canadian author is Kim Thúy's novel Mãn, and I know next to nothing about Indian-Canadian experiences, so why not give this one a go?

Speaking in generalized terms, the American perception of Canadians is that they're nicer, more considerate, and overall just better than us at being good people. It follows that many of us assume that there's no racism in Canada. After all, for decades (centuries?) enslaved people who looked like me regularly fled the "land of the free" to actually BE FREE in Canada. But alas! According to Koul, racism does indeed exist in Canada. She spends some time on colorism (or "shadism" as she calls it) and Indian/South Asian aspirations to whiteness, and I would've loved to know more about Canadian racism from her perspective. But while her identity as a brown woman plays some role in every one of her essays, she doesn't aim to write solely about race. The subjects covered run the gamut of social issues that are currently trendy to talk about, and in that sense this book of essays is not so unique. Yet, something about Koul's voice was so appealing to me that I couldn't stop reading! I actually chuckled, and quite frequently. Her snark is disarmingly entertaining.

The title comes from a conversation that Koul has with her cousin after a particularly painful and strenuous moment during said cousin's week-long Indian wedding festivities. It was Koul's way of consoling her, assuring her that this thing that sucks won't last forever, and probably won't matter much anyway. The book's content isn't nearly as depressing as the title might lead you to believe (the cover's even got bright pink and yellow colors to reassure you!). The essays I enjoyed the most are "Inheritance Tax", "Aus-piss-ee-ous", "Mister Beast Man to You, Randor", and "Tawi River, Elbow River".


"He has a cute butt. Ann agrees, saying she like his surly yet romantic silence, and posits what her husband or Hamhock might say if we brought this boy home with us. We crack a few jokes about turning him into a respectable man, My Fair Lady-ing him, getting him a suit, teaching him English. This is funny until I remember colonialism" (70).

"I just want to rub coconut oil in her hair and tell her that she is in my bones, no matter where she ends up" (109).

"I was editing at the time, and the whitest, malest landscape in the country is long-form writing. This is boring, like offering the same selection of toothpaste-flavoured ice cream for a century and then wondering why your business is failing" (123).