Today's review features two used books! The first I got from a local library book sale (was intrigued by the fact that it won a Pulitzer). The other one I found in my local Little Free Library (was simply curious).

The Mambo Kings Play Songs of Love by Oscar Hijuelos 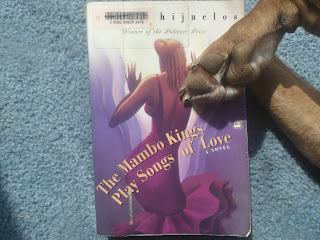 This would be a fantastic novel to pair with the animated film Chico & Rita on, say, a university syllabus for a course about pre-Castro Cuban music and migration to the United States. Coincidentally I caught the film on TV not too long before spotting this novel, which was fitting since they are both stories focused on Cuban musicians set during the same era. Originally from Las Piñas (in a province once known as Oriente), the Castillo brothers develop as artists in Havana before joining a wave of Cuban musicians who have been immigrating to New York since the 1920s.They arrive in 1945 and are young men living it up, but not without their troubles.

Younger brother Nestor (trumpet, vocals) has carried melancholy and anxiety with him since childhood, always feeling like something is missing especially after his first love dumped him back in Cuba. Older brother Cesar (band leader, vocals) is a restless macho man with daddy issues who let his pride ruin his marriage back in Cuba, and in NYC is only concerned with playing music and having a good time (copious amounts of sex, food, and alcohol). They lead an orchestra called The Mambo Kings, whose modest renown eventually scores them an appearance on 'I Love Lucy' and a nationwide tour. But Cesar loses the will to play music after Nestor's untimely death, and he doesn't take the inevitable loss of youth and virility well either. So after living in New York for three decades and watching the high life and his brother slip through his fingers with seemingly nothing to show for it, Cesar holes up in a hotel room to die, drinking alcohol, playing his old records, and reflecting on the past. The novel is mostly Cesar's memory of the past, as we revisit his life as a musician. You have ample (and I mean, ample) reasons to dislike the guy, but since he's all you've got to take you through the story, you want to sympathize with him despite yourself.

Mambo Kings is looong and I certainly wouldn't be in a rush to read it again soon, but it is incredibly thorough. If you're interested in Cuban culture, New York and its club scene after WW2, jazz and Latin music styles of the time, or simply enjoy reading emotive prose about love, passion (lots of sex scenes!), and loss, then read this book.


"What did he seek to accomplish? To write a song communicating such pure love and desire that María, far away, would magically reinstate him into the center of her heart. He though that she would 'hear' these melodies in her dreams and that something would possess her... and he would hear a knocking at the door [and] find María of his soul standing there, this woman who had somehow become the lost key to his happiness" (46).

"The guys who had it rough were the black musicians, who were treated in some places like lepers. No violence against them, just a bad silence when they'd go walking into a store, a disenchantment when they'd walk into a  lodge for the hungers' special breakfast, plates slapped down on the table, drinks poured quickly, eyes averted... Spirits were dampened, especially when the weather was bad, because in their travels through the heartland of America these fellows sometimes felt an Arctic coldness of spirit that made New York seem like Miami Beach" (180-81). 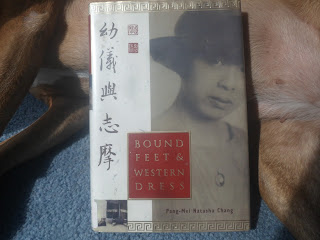 While giving attention to Chang's experiences growing up and fitting in (or not) as a Chinese-American girl in New England, this biography mostly focuses on her grandfather's sister Yu-i, whom Chang first read about in a book while studying Chinese history at Harvard. (Yu-i and her legendary poet first husband, Hsü Chih-mo, were often known as the first couple in China to get a modern divorce.) Inspired to learn more, Chang spent the next five years interviewing her great-aunt and writing this book. Born in 1900, Yu-i was married at 15 to the then-young scholar who saw her as little more than a filial obligation and country bumpkin. She ended up moving around from China to England, Paris, Berlin, back to China, and then to Hong Kong before emigrating to New York City in the 1970s.

The book's title refers to a conversation between Yu-i and Chih-mo in which he demanded a divorce because they weren't suited for each other ("bound feet and Western dress do not go together"). It also refers to how Yu-i's personal inclinations often went against tradition, as she refused to have her feet bound as a child, repeatedly endeavored to become educated even though girls' education wasn't prioritized, lived as a single mom in Europe, and eventually became a teacher, bank vice president, property owner, and businesswoman back in China all by 1928. And yet, as remarkable as Yu-i was, she neither reveled in her own accomplishments nor lambasted her ex-husband in this book. She learned to support herself because she had to, and as the mother of her ex's children she acted as daughter-in-law to his family even after he remarried and later died.

Aside from learning about Yu-i, I learned a lot more than I'd expected to about Chinese traditional values, especially in regard to women's duties as daughters, wives, and daughters-in-law. It's very similar to the information you might get from The Joy Luck Club, for example, but it includes more detailed explanations of customs, spiritual beliefs, Chinese family structures, and where these tenets come from.


"Rice was the food of the country, to be respected in all its phases: the ripe grain in the husk, the paddy, glutinous rice, rice in the straw, hulled rice and cooked rice. To honor the farmers who planted, tilled, harvested and husked the rice, one was not supposed to leave even one kernel at the bottom of one's ricebowl" (177).

"No matter how Western or progressive his thoughts, I believed Hsü Chi-mo to be Chinese, for the Western love that he sought did not save him in the end" (199).