Acquiring these two books reminded me how much my consumer decisions as a reader are influenced by people I've never met. I broke my "don't buy any books during the first half of 2017" rule for the first read, which I bought after listening to a podcast review of its 1990s movie adaptation. And the second one I bought after seeing headlines floating around that (white) people were mad that Octavia Spencer was cast to play God in its recently-released movie adaptation. I like to think that I'm picky and an independent thinker, but when it comes to books I don't need that much convincing, apparently. 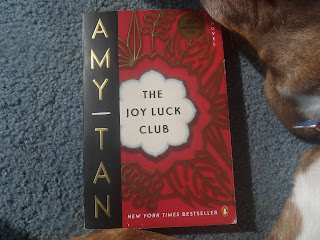 Multiple generations of Chinese and Chinese-American women are connected in this novel about womanhood, Chinese identity, sacrifice and fellowship. At the center are eight of them: four friends who found each other in the San Francisco Chinese immigrant community in the late 1940s, and their four daughters.

An-mei was reunited with her estranged mother at a young age, and witnessed her struggle as a low-ranking concubine in a rich man's house. An-Mei's daughter, Rose, is an artist who habitually avoids making decisions, and whose marriage to her dermatologist husband is failing. Lindo was arranged to be married at the age of two, and as an adolescent she cleverly escaped the marriage without dishonoring her family. Lindo's daughter, Waverly, was a chess champion as a child, and as a single mom she's finding love again with a fellow tax attorney. Ying-ying was married to a family friend at age 16, and after that marriage ended she moved to Shanghai where she met her second husband, a white American man. Ying-ying's daughter, Lena, is a restaurant designer married to an insufferably stingy architect. Last but not least, Suyuan lost her first husband and children while fleeing Japanese forces. She started the tradition of gathering over dim sum, mah jong, and gossip (the titular Joy Luck Club) in China and continued it in the Bay. Though her copywriter daughter, Jing-mei or "June", has been a disappointment by certain Chinese standards, the other mothers give her the invaluable task of reuniting with her long-lost older sisters in China after Suyuan's passing.

I was already inclined to like this book after hearing such a comprehensive review of the film, and I love to read literature that focues on immigrant experiences. What endears me to The Joy Luck Club most is each woman's remarkable sense of self-preservation. Through familial expectations, commonplace disappointments and unspeakable tragedies, each woman possesses a certain determination to maintain or reclaim their sense of self, and recounting their personal histories is an integral part of this.

"Even if I had expected it, even if I had known what I was going to do with my life, it still would have knocked the wind out of me. When something that violent hits you, you can't help but lose your balance and fall. And after you pick yourself up, you realize you can't trust anybody to save you―not your husband, not your mother, not God. So what can you do to stop yourself from titling and falling over again" (120-121).

"I will gather my past and look. I will see a thing that has already happened. The pain that cut my spirit loose, I will hold that pain in my hand until it becomes hard and shiny, more clear... I will use this sharp pain to penetrate my daughter's tough skin and cut her tiger spirit loose. She will fight me, because this is the nature of two tigers. But I will win and give her my spirit, because this is the way a mother loves her daughter" (252).

The Shack by Wm. Paul Young 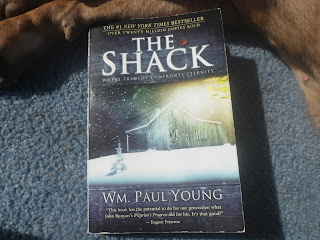 Four years after his youngest daughter is abducted by a serial murderer, Mack finds a note in his mailbox inviting him to the dilapidated shack where the last trace of his daughter was found. The note is mysteriously signed, "Papa". Despite his fears and suspicions, Mack goes to the shack in the dead of winter and falls asleep there. He awakes to find the shack restored and the area around it bright, warm, and verdant. He's welcomed by God, presenting as a Black woman ("Elousia"/ "Papa"); Jesus, presenting as a Middle Eastern Jewish man; and the Holy Spirit, presenting as an Asian woman ("Sarayu"). He spends a weekend with them, digging deep into in all of his past hurts, grievances against God, and misconceptions about the Christian faith and the Trinity.

I wasn't expecting to be impressed by this book, but it really challenged me, and challenges me still. At face value, The Shack could be a comforting resource to anyone who has suffered loss or harm at the hands of others. But it's also a necessarily uncomfortable opportunity for believers to reckon with the deity they claim to worship and the faith they claim to profess. A lot of hit dogs will be hollering, that's all I have to say. The novel contains some fluttery wording that's obviously trying to tap into readers' emotions, which is somewhat annoying. And Young's attempts at Ebonics or mammy-isms or whatever the heck Papa was supposed to be speaking were at best clunky, at worst horrendously contrived. HOWEVER. The Shack's writing is clear and gets the point across. And even with all the philosophical and theological content, it has more than a few lighthearted moments. Though the humor or significants of some moments is enhanced by prior knowledge of the Bible and common church sayings, I'd like to hope that it doesn't leave lapsed or non-believing people feeling too out of the loop. Judging by the 20 million copies sold, perhaps it hasn't. I never intended to watch the film and I still don't, but I am glad that I gave this book a try because it's given me much to reconsider.

"I am neither male nor female, even though both genders are derived from my nature. If I choose to appear to you as a man or a woman, it's because I love you. For me to appear to you as a woman and suggest that you call me 'Papa' is simply to mix metaphors, to help you keep from falling so easily back into your religious conditioning" (95).

"Remember, Mackenzie, I don't wonder what you will do or what choices you will make. I already know... And let's say that I know it will take you forty-seven situations and events before you will actually hear me―that is, before you will hear clearly enough to agree with me and change. So when you don't hear me the first time, I'm not frustrated or disappointed, I'm thrilled. Only forty-six more times to go! And that first time will be a building block to construct a bridge of healing that one day―that today―you will walk across" (189).