I'm closing out the month of June (and the first half of 2021) with a new book review! First up is a novel about a one night stand that becomes an unlikely long distance relationship between two Black artists, who operate on separate coasts and in separate countries. And then, a novel about five 20 and 30-something Korean women living in the same apartment building in Seoul, weathering the beauty standards and competitive social hierarchies that dictate their survival. My only reasoning for pairing these two books together is that both of their titles start with the conditional "If".
If I Don't Have You by Sareeta Domingo 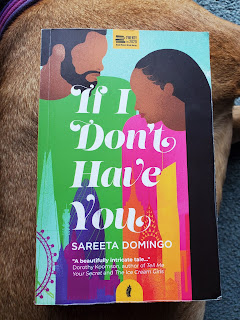 Who would've thought that reading Jasmine Guillory's The Wedding Party back in 2019 would have the impact on me that it's had? Certainly not me! I wouldn't say that I'm a dedicated romance reader now, but I've become more open to giving certain romance novels a chance when they do genuinely interest me (and especially when they focus on Black people in love). Case in point: If I Don't Have You. I believe I discovered this novel through following Kelechi Okafor and/or Bolu Babalola, two Black British writers who are acquainted with this book's author, Sareeta Domingo. I can't remember what exactly sold me on this book in particular, but when March came around this year and I finally decided how I wanted to use the Amazon gift card my stepmom gave me last Christmas, I chose two works of romance written by Black British women and If I Don't Have You is one of them.
When Kayla (a writer and multidisciplinary artist from London) interviews Ren (an Afro-Brazilian indie filmmaker from New York City who's pivoted to being a blockbuster director) during the New York press junket for Ren's new film, the two artists feel an immediate and undeniable connection. The pair are mutually stunned by each other's presence, physical beauty, and sense of artistic integrity. They discuss Ren's filmography, Kayla asks him a few extra questions and snaps Polaroids of him for an independent project of hers, and then they part ways, each on their way out of the city; Kayla's temporarily heading home to London, and Ren's heading to Toronto for work. Luckily, they run into each other at the airport, and weather-related flight cancellations lead to them sharing the only available room in the hotel that the film studio had previously booked for Ren's press junket. After wandering around the city together that night, they return to the hotel and have what they think will be a one night stand. But after spending the following morning together and struggling to bid farewell at the airport, Kayla and Ren agree to reunite in New York in three months' time and see how far this new relationship might go.
However, what Ren doesn't know is that Kayla is already engaged. She's spent years building a career as an artist in New York City, and marrying an American citizen has become her only viable option for staying in the States. Her business partner and Columbia art school friend Cole (who fancies her but respects Kayla's boundaries enough to keep their relationship platonic), has agreed to marry her so she can remain. While in London waiting for everything to be arranged so she can return to the States and marry Cole, Kayla receives an unexpected postcard from Ren, who'd taken her up on her challenge to "find" her instead of exchanging contact information when they last parted. What unfolds, through messages and phone calls and video calls and emails, is a long distance relationship that both lovers are deeply invested in, even as much as they're unsure of whether they can maintain it. But Kayla's never been in love before, and a combination of fright and cowardice prevent her from telling Ren the truth about the lengths to which she's going to protect her ambitions. And Ren—who was effectively abandoned by his mom when she moved back to Brazil after divorcing his dad, and who's still hurting after his ex-girlfriend recently cheated on him with his best friend—certainly won't take kindly to being betrayed and possibly rejected again. When Ren unintentionally crashes Kayla's wedding party in New York, he's the one to walk away from the relationship altogether. But can they still find their way back to each other?
This novel is a movie. The whole time I was reading it, I felt like I was reading a movie. Especially during Kayla and Ren's first night together (before the sexcapades), when they're eating at a favorite diner of Ren's, then meandering around the city, even pausing to pull each other close and dance in the street? And the whole time they're vulnerably spilling their guts, while still being somewhat bashful because of how strongly they're attracted to one another? A movie, I tell you! I also appreciate that no matter what's going on in Kayla and Ren's individual lives, the focus always returns to their relationship. While in London, Kayla braces herself to be judged and interrogated before telling her family about her upcoming wedding, but then there's no big ordeal once her family hears the news (her mom and sister, the ones whose reactions she was most worried about, are shockingly accepting of her decision). So then most of her time in London is spent thinking about and communicating with Ren. Special circumstances force Ren to interact with his ex-girlfriend and his ex-best friend again when the hurt and anger is still somewhat raw, but that gets resolved, and Ren's not even remotely interested in trying to get his ex-girlfriend back because he's concentrated on the new possibilities he has with Kayla. While they're broken up, Kayla and Ren each start dating other people, but once those other people aren't a factor anymore, they disappear from the story. Plus, the novel's leads can't resist thinking about each other when they're broken up anyway. The book stays on track, moving gradually toward the obvious goal of bringing the lead couple back together somehow, and I appreciate Sareeta Domingo's steadfastness in writing it that way. Getting to the point while also taking her time.

The conflict between Kayla and Ren boils down to miscommunication and misjudgments, which seem to be the main obstacles in most modern romantic stories. But once they do finally hash out their differences, the way they talk through their fears, confusion, hurt, and insecurities is almost unbelievably honest. People sometimes criticize the dialogue that's in books, films, and TV because the characters don't talk like real human beings would, but the dialogue in If I Don't Have You is the opposite. It actually makes me question if the real-life conversations I'm having are truly as "real" and honest as they could be! (I tend to resist being vulnerable with people, so I already know the answer to that question is no. But I digress.) And the way Domingo writes body language and physical intimacy between this couple is just... Lawdhammercy. I had to take breaks to collect myself! Kayla and Ren make me want to believe in fate and love and second chances again, even though I've never had a relationship to make me disbelieve in any of those things in the first place! That's how much I bought into their love story.

If I Don't Have You is undoubtedly the best romance book I've ever read (so far), and is my favorite thing I've read in 2021 (again, so far). The cover, header, and footer font is loopy and pleasing to the eye. My only gripe about the book is that its cover illustration doesn't make clear that Kayla's devastatingly-long and beautiful hair is in locs. As far as reading romance goes, I wholeheartedly believe in the precedent that If I Don't Have You has set for me and I'm excited to explore more, both in the romance genre and in Sareeta Domingo's bibliography. If you're into Black love, the artist's quandary of succeeding without selling out, top tier sex scenes, self-deprecating humor that's actually adorable and not annoying, or supporting one of the 20 Black British books that Jacaranda Books published last year ("Twenty in 2020") then read this book!

"Do your dreams feel real?
What is it you most admire about the person you admire most?
How often do you look up?
Why is that song your favourite?
When did you last get goose bumps?
Why do we create?" (31-32).
"Maybe sometimes you just have to live in the moment, take what life gives you... Like maybe there's a plan... A blueprint for your life that you don't know about—certain things that are meant to happen, people you're supposed to meet. When you think about it, how much do we really need to know about another person to get their essence, anyway? To understand if they're... significant? No time at all, right? I'm only just starting to understand how important it is to not take things like that for granted." (95)
"'Kayla.' He says my name like it's a complete sentence, packed with meaning" (223).
"I think as creative people, you, me, any of us, create because it's inside and needs to come out. Because we're human beings, and making art is what defines us as such. Like making love, without necessarily the intention of making life... But as much as I think creating is a need, I also think sometimes we create for the hell of it. Because we can, you know?" (230).

If I Had Your Face by Frances Cha 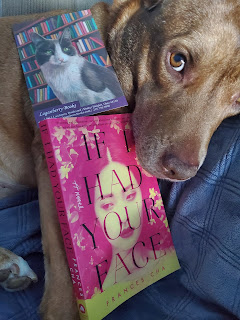 "I know it will fade by next week, but for now it makes me happy, as if I have set off a signal to the world. Already, I have noticed how people react with great caution to someone with fuchsia hair, even if that person is mute" (149).
"I am sitting on the curb looking up at the cloudless wintry sky and wondering if I am a happier person than I was twenty minutes ago, when I did not know what I know now" (172).
"In a way, I think I am now experiencing true freedom for the first time in my life. That is the way to think of this—that this is karma, and also absolution... But before he sees her in my work, I will suck everything I can from him. I will be wild and unleashed. I will now take from him what I can. I have not heard Kyuri's philosophies on men all this time for nothing... I will build myself up so high in such a short time that when he leaves me, I will become a lightning storm, a nuclear apocalypse. I will not come out of this with nothing." (213-215)
"Whatever it is, I am so grateful that a gush of hope springs deep inside me and it is everything I can do to not break down completely in public. I want to share this with someone—anyone. I want to clutch the lady who is sitting next to me on the subway and tell her. I want her to know a little world is erupting inside of me" (216).