BOOKS! (Lost Names + Things that I Do in the Dark)

Lately I've been trying to pick back up and finish older books that I've set aside at the same time that I make my way through newer purchases. So for this month's review, I'm pairing two books that I've kept waiting for years, both of which were originally published in the 1970s (1970 and 1977, respectively). First up is a semi-autobiographical novel about the final 13 years of Japan's colonization of Korea, from the perspective of a young boy growing up in what's now called North Korea. And then, a collection of 1950s-1970s poems by June Jordan (edited by Toni Morrison) which contemplate selfhood, community, desire, and Black struggle/liberation.
Lost Names: Scenes from a Korean Boyhood  by Richard E. Kim 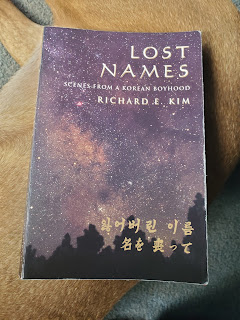 "I think about it, however. Would the Japanese Emperor know that we children are bowing our heads to him? He may be asleep... he may be eating his breakfast... or he may be in the toilet, for all we know... and I can't help giggling about the picture conjured up by the last image... the Emperor is in the toilet and someone knocks on the door and says, 'Your Majesty, Your Majesty! The children, the children! They are bowing to Your Majesty!'... and the Emperor says, 'Wait a minute! Wait a minute! I have my pants down!' Ha, ha, ha, I laugh" (30-31).
"People are driven into the cold, dank, and gray recesses of their houses with nothing much to do but think about the warm spring... Children are bound, too, into wherever they can find a little warmth, with a monotonous routine and a frustrating and demoralizing suspicion that, somehow, life has come to a stop. But, of course, life has not come to an end; it is, simply, in captivity, in the grips of a very cruel season...." (88).
"No, you don't forget that. No, I won't forget that... I merely reflect, with a quick, sharp ache within me, that that is only one of the many other things that I cannot and will not forget. 'Vengeance is Mine,' says a god. 'Vengeance is Yours,' I say, 'Memories are Mine'" (135).

Things that I Do in the Dark: Selected Poems  by June Jordan 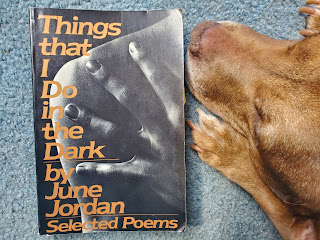