A second book review in April! Hoped I would do it, and here I am doing it! As this month draws to a close, I decided to focus on only one book this time, reviewing it upon personal request from the author. That book is Confessions of a Young Adult's Life by Bri Michelle. Bri is a librarian whom I first got connected with in February thanks to a wonderful woman named Tura, a previous guest on my podcast (Young, Gifted and Abroad) and a librarian friend of Bri's. Bri was seeking guests for her new book-focused podcast called Stories With Bri (the episode I guested on should be released in June), and she asked me to read and review her self-published memoir when I mentioned that I write book reviews during our email correspondence. This is now the second time that an author has directly requested such a thing from me, and just like last time I want to make clear that while Bri did send me a copy of her book on her own dime, I am not being compensated for this review. I'm simply writing it because I feel like doing so (and because she asked). As always, I will keep things as genuine and fair as I can.
Confessions of a Young Adult's Life: A Memoir by Bri Michelle 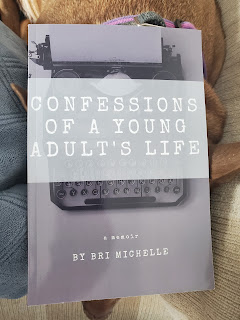 "Edward was the best dope dealer I ever met. What was his product? Selling dreams. That man knew how to create a fiend. He was my pusher, my kryptonite; he wrapped me into him and made me feel like he was all I needed... He was a prophet of false hope" (36-37).
"You are not crazy! You deserve to live free in your mind" (46).
"What made me beautiful were my achievements. I ascribed people's accolades about my achievements as self-worth. I am valuable because I am educated, smart, and focused... I disgusted myself physically, but who cares, I'm the smart one... No one talks about when the music stops and all the goals on the list are finally checked off. We don't discuss when you rapidly accomplish everything on your short-term list and have no idea what's next. When the list was done and the running had ceased, I had nothing else to attribute my self worth to. It was now just me... I no longer felt better than someone else" (59-60).
"Having success was great, but I often felt like a complete failure when I didn't have all the answers. I begin to feel unimportant and unlikeable. I attributed my likeability by others based on how knowledgeable I was. If I knew the answer than people would like me, or most importantly, love me because I was useful to them. One reason being is that I thought I was incapable of being loved outside of me knowing everything. But then, I finally woke up. I realized that I didn't have to know everything and I had to be okay with not knowing... I must be humble in knowing that thought I am unique, I'm not better than my neighbor" (61).