I've found it! I've found my favorite book of 2022 (so far)! Obviously it's still relatively early, but if my current favorite is any indication of what's to come for me reading-wise this year, then I'm excited! I would've written this review in March before the month ended, but I needed more time to digest my new fave on my own. It's been two weeks since I finished it, and I still think about it every day. Now I'm ready to write, so for my April review, I'm examining the two books that my mom gave me for my birthday in December which I read in their entirety last month. First, a collection of stories about a young gay Afro-Latino man coming of age as Houston gentrifies around him. And then, a romance novel (my newly-crowned fave of 2022) about two Black, thirty-something, wounded authors who get an unexpected second chance to renew a fling they had in high school.
Lot: Stories by Bryan Washington 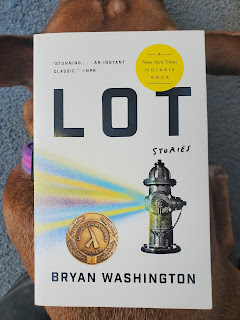 "I'd never in my life seen an actual whore (according to Nikki), a night worker (my father), or a calf in the wilderness (who else), so I looked her in the eyes for the thing that made it so; but all I saw was just some lady" (46).
"Eventually, I  finally asked her what she got out of reading these books by old dead men, what the words on the page had to do with her. The kind of question an idiot asks. But she took it seriously, she pursed her lips.

It's just another way to talk to the dead, she said. 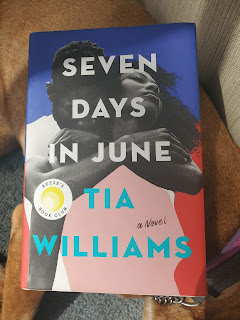 "Hell yes, I'm mad. 'Cause I care. It took fortunes made and lost, one tarot-card reader, and too much AA for me to be evolved enough to say those words. I care about things... Look, I'm admitting that I care about awards. What do you care about?" (42).
"The world was too loud for little-boy Shane. What he didn't know was that he was training himself to be a deeply empathetic writer—understanding nuanced emotion, spying humanity in unexpected places, seeing past the obvious. He was taking notes for his future self, who would write it all down. Every fucking thing he saw" (116).
"But she'd never wanted kids. Books were her kids. They cuddled up with her at night, kept her warm, quieted her thoughts when her marriage seemed thin, her life choices felt pointless, or her job seemed stagnant... She was happy not to feel anything super deeply. The top level of life was enough for her. The beginning of the night, when there was the buzzing possibility of intrigue and drama... Long ago, she'd learned that life could be bitterly disappointing if allowed. There were blows and stumbles, but your job was to stay interested in the world" (196).
"I wanna be everything. Wanna be the reason you light up. I wanna make you laugh, make you moan, make you safe. I want to be the thought that lulls you to sleep. The memory that gets you off. I wanna be where all your paths end. I wanna do everything you do to me" (241).
"I thought I couldn't be a successful person if I had demons. But what fully realized person doesn't? Women are expected to absorb traumas both subtle and loud and move on. Shoulder the weight of the world. But when the world fucks with us, the worst thing we can do is bury it. Embracing it makes us strong enough to fuck the world right back" (305).