BOOKS! (I Think I Might Love You + The Perfect Find)

Truth be told, August hasn't been the greatest month for me, and even as I try to write this review, I'm not in the greatest of spirits. Maybe this review will be shorter than usual, I don't know. But one of the things I tried to do this month to lift my spirits (or at least sufficiently distract myself) was read Black romance! Specifically, the two romance novels I ordered as a 4th anniversary/100th episode present to myself (see Young, Gifted and Abroad). First up is a novella about a late-blooming college student/ice cream franchise owner with anger issues, being mutually aggravated yet charmed by a veterinarian tasked with supervising her community service after she vandalizes her ex's car. And then, a novel about a 40-year-old fashion magazine editor whose second chance at her New York career includes a second chance at love... with a 22-year-old filmmaker/coworker who's also her boss's son.
I Think I Might Love You by Christina C. Jones 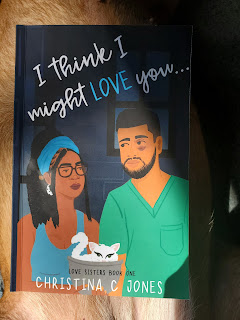 I wasn't exaggerating when I said that Carole V. Bell's essay "I'm Rooting for Everybody Black: Black Solidarity, Black World-Building, and Black Love" (from Black Love Matters) thoroughly sold me on I Think I Might Love You! I'd never heard of the novella or Christina C. Jones when I read that essay, but Bell's description of how overwhelmed the male lead (Kadan, in his early 30s) is by the female lead's beauty as a Black woman (Jaclyn or Jac, in her mid-20s) was too alluring for me not to read the whole novella for myself. Because who doesn't want to imagine being worshiped like that, even if Kadan keeps his reverence for Jaclyn to himself at first?
Kadan has good reason to hold back because 1) the first time he meets Jaclyn, she's drunkenly using her key to let herself into his apartment (the one he's subletting from Jaclyn's sister, which Jaclyn hadn't known about), then punching him in the face and kneeing him in the groin when he, caught off-guard and in the nude, confronts her about the intrusion. And 2) Jaclyn is exactly his type. He loves wild women, as did his father, but hoeing basically cut his dad's life short and Kadan doesn't want to risk the same fate. So when Jaclyn unexpectedly walks into his vet clinic not long after their dustup, carrying the stray cat she found on her fire escape and later asking to volunteer there since she's been sentenced to 400 hours of community service—his clinic is the only court-approved establishment that still has volunteer spots open—he keeps his obvious attraction to her under wraps.
But then there's all the slick, sarcastic banter that evolves into flirting so seamlessly that neither of them even have to try, because they're both feeling each other. And then there's the house call when Kadan comes over to check on the stray cat (Miss Thing) that Jaclyn reluctantly adopted, which leads to the human pair doing "qualitative research" in Jaclyn's bed. And then there's the time when Kadan helping to serve a rush of customers at Jaclyn's ice cream shop leads to him also helping her relieve some stress on top of her office desk. And then there's their fake-dating arrangement to get Kadan's sadiddy aunt (the judge who sentenced Jac to 400 hours of community service) off his back; Jaclyn pretends to be Kadan's girlfriend when judge auntie visits the clinic, and she's his date to their local university's alumni ball (where judge auntie tries to set him up with a sadiddy woman just like herself). Jaclyn and Kadan had agreed not to catch feelings the first time they had sex, but by the time they go to the alumni ball, feelings have been caught! So they agree to give Jaclyn some extra time alone to mourn her previous relationship and focus on graduating, before moving forward with their new relationship.
I must say, naming the cat Miss Thing is one of the most brilliant choices that Christina C. Jones makes with I Think I Might Love You. It's such a telling name. Jac doesn't want to keep the cat, much less name it, so she starts calling it Miss Thing in an unsuccessful attempt to remain detached from it. And that name, "Miss Thing" is so impersonal and full of contempt, but is also such specific Black-woman-putting-someone-on-notice phrasing (almost as pointed as addressing a woman or girl as "Little Girl", regardless of her age), that it's actually adorable! Especially given the fact that despite Jac's grousing and trying to act mean, everyone around her calls out the fact that Miss Thing ain't going nowhere! That's her cat now.
The only thing that rankles me about I Think I Might Love You is that Kadan doesn't go to Jac's graduation ceremony; he surprises her at her apartment after the festivities are over instead. Sure, he wants to give her space to focus on finishing school and process how she feels about him romantically, and the idea is for them to pick up where they left off after graduation. But how does that translate to him not showing up for the ceremony at all? Kadan's reasoning is that he didn't want to make Jac's day about him, but... huh? How would him being there make the day about him? This is a huge milestone in Jac's life, one I'm sure she would've wanted to celebrate during the day with both him and her folks (who already know about him), but he doesn't show up for it because his mere presence would somehow take precedence over everything else? That still doesn't make sense to me. Other than that, though, I'm so impressed with ITIMLY. It's a wonder that Jones has been able to fit such a robust love story into a mere 133 pages! I wish it were longer, but maybe that's where the other two books in the "Love Sisters" trilogy come in. We'll see. If you appreciate snark, relationships hilariously starting off on the wrong foot, foul-mouthed Black women who have good hearts but are often misunderstood, rescue cats, workplace romances, Black college towns, or admittedly hoe-ish veterinarians, then read this book!
Favorite quotes:

"I put a few pieces in the bowl—then stopped to check the internet to make sure cats could even eat chicken [...] I slid the bowl to her, close enough she wouldn't have to move too much to get to it. That heifer took one sniff, looked at me, then put her head down without even touching it.
I sucked my teeth. 'Okay, I know your ass isn't being picky?' I pushed the bowl closer, prompting her to lift her head for another long 'bitch, can't you tell I don't want this??' stare" (14).
"'I think I might... love you,' I admitted. 'Just a little though. Like, right at the beginning, you know? And I know it's stupid soon to say something like that, but it's just the truth. So if me being a weirdo and saying that isn't too much of a turnoff, then—'" (133).

The Perfect Find by Tia Williams 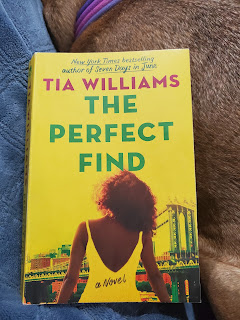 "It's just always been there. I guess, when I was a kid, my life felt... messy. I loved that movies had a beginning, middle, and end. Everything works out in the third act. Or maybe it doesn't, but at least you have an answer. And I like making the world look how I want it to look. It feels like I'm God" (73).
"'Profane, but pure,' she said. 'Sacred. That's what I want it to feel like [...] I want to know without words. I want to fall so violently that I risk breaking into a million pieces. I want to love so desperately it's indecent. I want it to be wild and fated and forever. A no-choice connection. Do you know what I mean?
[...] I know that kind of love is an unsustainable fantasy. But I'd kill to have that intensity of feeling for someone'" (161-62).
"I met you way too soon and I don't know what we do about that. But I love you. I love you like it's my calling [...] Your you-ness ruins me" (274).