Today was all about the Traverse City area, so after breakfast Ma and I got in the car and drove two hours south to the Sleeping Bear Dunes. Google Maps led us through country road after country road, and took us past the Grand Traverse Bay as we rode through the National Cherry Festival in downtown Traverse City (our second destination for the day) to the dune climb in Glen Arbor. 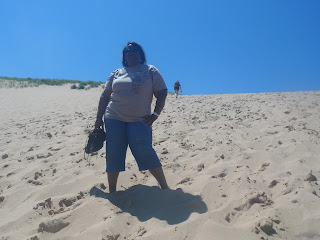 At the dune climb they charged $15 per vehicle and gave us a pass that lasted seven days. After parking we approached the dunes, took off our socks and shoes, I hiked up my pants, and we made our way up digging our feet into the scorching hot sand one step at a time. The climb can take as little or as much time as your stamina and goals will allow. Once you get up the first hill, you have three options. First, you can take in the view of the sand and Glen Lake below, and head back down once you've had your fill. Second, you can head right and take a winding, arduous, up and down trail to Lake Michigan (remember, you'll have to climb your way back). Third, you can head left and climb to the lookout. It's straight up, but then again the entire trek back to the parking lot is all downhill. 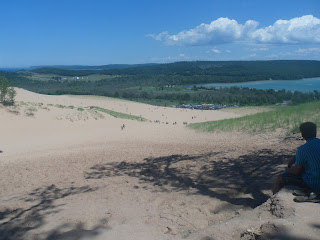 Visiting Sleeping Bear Dunes had been Ma's idea, so I tried to encourage her to keep going so she could see Lake Michigan on the other side and get the most out of this experience. We had all day; we could pace ourselves and stop to rest as many times as necessary. But Ma made it very clear that she was "tahrd" (tired), was satisfied by what she'd seen, and was read to descend. I said alright. And I almost turned to descend too. But I kept staring at the lookout and all the people getting further and further away looking like ants as they made their way up there. And I thought, Okay. Let me just see how much higher I can go. Ma sat down where we were and said she'd wait, so I kept going. I hadn't expected to make it all the way... until I did! I was so proud of myself! From my vantage point I had an even better view of Glen Lake, the surrounding scenery, and the way from which I'd come on one side. On the other side I could see the rest of the dunes and catch a glimpse of Lake Michigan. I hate posing for pictures, but I had someone take one of me at the lookout since I knew Ma would appreciate it. I brought her a sparkly rock from up there as a consolation prize too. 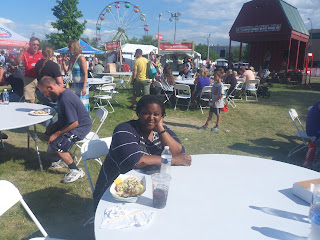 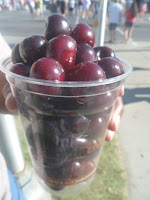 We took our time making it all the way down and then drove back the way we came to downtown Traverse City for the festival. I'd expected it to be a smaller town like Mackinaw City, but TC is actually a real and lively city. Not a sprawling metropolis, but large enough. I was impressed. And walking along the bay seeing all the people having fun or relaxing in and around the water made me feel nostalgic, reminiscing about the weekends in Hikone when people flocked to Matsubara beach just to take advantage of the weather and enjoy Lake Biwa.

Another misconception I'd had was that that since it was the National Cherry Festival, it would be all cherry errthing. All the food and beverages cherry-flavored, everybody and everything outfitted in various shades of red, people dressed like cherries. Turns out, while there was a mascot (his name's Super Cherry, but I only saw posters of him), and plenty of foods with cherries in them, it's not actually all cherry errthing. It's more like any other summer festival, but just so happens to also use the event to highlight its highly renowned and marketable local produce. It was spread out and well-organized, a pleasant way to spend a summer day, but nothing out of the ordinary. Once we got there we ate some food, walked around to see what was what, bought a cup of cherries (16 oz. for $5), and then dipped. Google Maps had us take a different way back, leading us along Lake Michigan and passing through Charlevoix, where we got to stop and watch them raise the bridge so a ship could pass. For dinner back in Mackinaw City, we had Italian food at Nonna Lisa's. Think excellent Italian food inside of a hunter's lodge. Lots of wood, taxidermy, fake pine trees, and white Christmas lights. Somewhat incongruous with the cuisine, but it's actually pretty on brand as far as northern Michigan interior design goes. I ordered the seafood portofino, which was bomb! I'd just wanted to try something different, but I hadn't realized how much I actually enjoy seafood. And I tasted mussels for the first time, so that was nice too. Ma ordered spaghetti, and for someone who'd insisted she was "not that hungry", she put away more of her dish than I did mine! 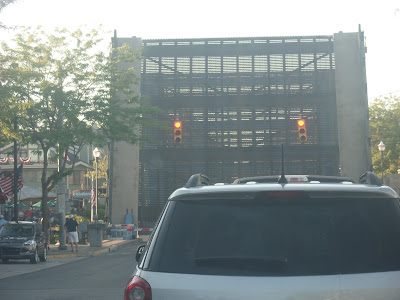