So I've been back from Korea for over a month, and I really felt like the month of March was trying my life. So even though I was able to keep reading, I haven't had the energy to write about much other than the Korea trip, which I finally finished last week. But it's April now, I decided to stop throwing caution to the wind and actually write out a loose schedule of book pairs that I'll read and write reviews for this month and next month, and so I'm ready to get back at it. Today I have a novel that I learned about via Instagram, and a novel that I found at a used book store in Louisville. 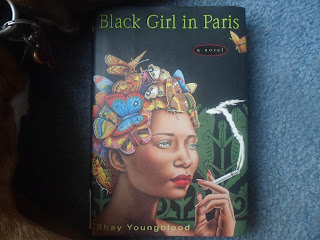 I've been following the Brooklyn-based book club and literary festival called Well-Read Black Girl for a while on Instagram, but had never picked a book to read based on their recommendation until some months ago. One day they featured Black Girl in Paris, and numerous women commented on the photo saying how the book changed their life, or how it inspired them to travel more, or how it allowed them to relive their own experiences in the City of Lights. And since I myself was also a black girl in Paris four years ago, and since the cover was so startlingly beautiful (an afro made of butterflies, y'all!), I figured what the hey. All aboard the francophile/nostalgia train! I ordered my copy from ThriftBooks.

In the 1980s, Eden is a poet at heart who exchanges her life in the South for a sojourn in Paris, following in the footsteps of the young black Harlem Renaissance artists who found freedom there before her. She hopes that being in Paris will help her develop as an artist, and maybe even allow her to meet her personal literary hero, James Baldwin. Abandoned as a baby but raised by loving adoptive parents, she graduated university with a degree in literature, and by the time she decides to go to Paris she is working as a tour guide/archivist in the mansion-turned-museum of a historically wealthy black family. But she is haunted by memories of growing up under Jim Crow, desperately wants to be an artist, and wants more than the limited existence that she feels awaits her if she stays in Georgia as she is. After a pair of Black French visitors to the museum encourage her to visit Paris and she pulls an all-nighter reading James Baldwin's books in the museum library, Eden decides that that's where she needs to be. So at 26 years old, she arrives in Paris with $200, few belongings, and a dream.

Eden is preoccupied with learning the city, engaging with the artist community, and finding her own voice as a writer, and she hasn't placed a definite time limit on her time in Paris. But she still needs to survive in the meantime, so each chapter is identified by how she occupies herself during that time. My personal favorites include the "au pair" chapter, in which she lives with an American diplomat's family and experiences the elitism and racism embedded in expat communities (often white) that rely on poor immigrant labor (often brown) to keep their homes running and children taken care of. And the "lover" chapter, in which she begins a passionate relationship with a white trumpet player from Louisiana named Ving, who uses music to overcome personal childhood trauma. And the "thief" chapter, in which she pairs up with a fellow vagabond from Barbados, and the two black women steal and squat their way to survival. Broke and weary from trying to make it in Paris, Eden heads south to Saint-Paul-de-Vence for more inspiration and hopefully to cross paths with James Baldwin. But I'll let you read the novel to see if she finds what she's looking for in the end.

To put it plainly, I adore this book. I don't read many English-language books about Paris, but the last book I read that was so true to the culture and essence of that city was Waiting for Gertrude, which I read while I was there. If you like to read about wanderers, black women following their dreams, artists claiming the lives that they want, or need to go on a journey of your own and need a bit of inspiration, read Black Girl in Paris!


"My tongue is wasted on words when you would be of better use in my mouth" (28).

"The poet Elizabeth has so little imagination she thinks I steal from her... I cannot escape her expectation that gratitude be married to servitude. Her skin is pale and privileged, mine is brown and sweaty from labor in her house. I am not thankful. Not even a little... I want to slap her, but it is too easy to hurt her. There are many ways to torment a soul" (122-123). 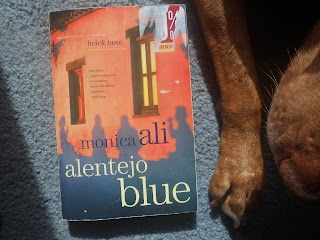 To round out 2017 I spent the last two weeks of December in Louisville as I always do, and it's my aunt's tradition to take advantage of the post-Christmas sales. I usually just tag along to get out of the house, but this time she mentioned wanting to visit a used bookstore called Half Price Books, since she'd read that almost everything in the store would be 50% off that day. Alentejo Blue was among my purchases. It was a pretty simple thought process: my favorite color is blue, I had never read a book set in Portugal before, and I saw that the author was a woman of color from the UK, so I bought it. It was the only book I read while in Korea, and I finished it after I returned home.

Alentejo Blue is set in Mamarrosa, a small Portuguese village whose residents are hoping for a second wind. (Alentejo is a real region and Mamarrosa is a real village in Portugal, but the two places are actually in different areas of the country.) Despite a revolution that toppled a fascist regime in the past, elites still managed to buy back most of the land and control the local resources, so most local residents are still struggling financially. Nonetheless, people find a way to enjoy their simple way of life, and rumors abound that a man who grew up there, left, and became rich will soon return home to establish some sort of venture that will bring more jobs and money to the village. Each chapter is devoted to a different local resident or British expat/tourist in Mamarrosa contending with their own disappointment, uncertainty, and waiting.

There's João, an elderly man who finds his former lover and regime-fighting friend Rui hanging from a tree. There's Vasco, an outwardly jovial and occasionally indignant bar owner who has an eating disorder. And Teresa, a young woman who was forced to sacrifice her education for her little brother's benefit, and is determined to move to London and leave the village behind. And who can forget the Pottses, a supremely dysfunctional family from the UK that's a source of scandal and entertainment for the rest of the village. These are just a few of the characters who populate Mamarrosa, for better or for worse. And when the long-awaited rich guy finally appears in town, he is hardly what most expect him to be.

If you enjoy reading about small town life or want to learn about Portuguese culture, then read Alentejo Blue!


"But we keep pretending to believe his lies. That's the problem with our people. If you pretend for long enough, you forget you were only pretending in the first place. The illusion becomes a kind of reality" (8).

"What I'm thinking now is that I should plead guilty. In England you get life for a murder. A life for a life. But they let you out before you die... I think I'd like it. All this business of what to do next, how to do it, when to do it, why you're doing it. Well, they take that off you, don't they?... You don't have to pretend anymore about pushing on, going somewhere. You just have to serve your time. Isn't that what we're doing anyway?" (157).