Seattle has the Space Needle. Toronto has the CN tower. Seoul has Namsan Tower, or N Seoul Tower. We caught a glimpse of it practically every day that we visited Seoul, and since this was our last full day in Korea it was only right to go back to Seoul to see the thing up close. 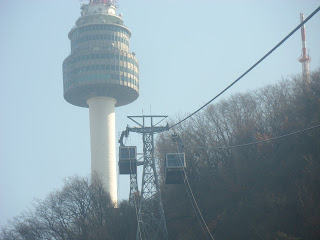 We had plans to meet Ande's boo for dinner so we had to be back in Suwon by a certain time in the evening. But there were two things in Seoul that we still had to knock off of our list, and Namsan Tower was the first one. From the bus into Seoul we took the metro to Myeongdong, and then a taxi up to the cable car station. 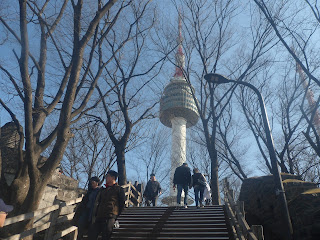 Your experience going to Namsan Tower depends on how much money you're willing to spend, how much time you have, and how much exercise you feel like getting that day. The tower sits on top of a mountain, so you can get up there for free by taking the stairs, but again, that means you'd be climbing a mountain. So if you're in the mood for a hike and have time to kill, then that could work for you. We didn't have much time (and I personally wasn't up for mountain-climbing), so we bought two-way tickets to ride the cable car. 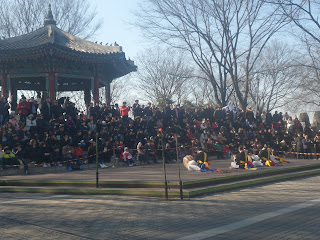 Either way you get up there, stairs will still be involved because the cable car doesn't go all the way to the same level as Namsan Tower. And either way you get up there, you will have to pay about $10 to go to the top of the tower. We hadn't known this, Ande and Sharon didn't feel like paying, and I figured going up alone wouldn't be much fun, so we satisfied ourselves with what we could see from outside the tower. 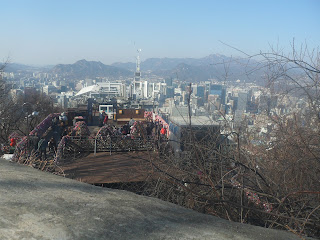 There's a large plaza with a seating area, and while we were there a troupe of traditional drummers performed, followed by a group of young men dressed in traditional garb who did traditional dance and sword-fighting choreography. There were also a couple cafes, an Olive Young convenience store that I bought a yogurt drink from, a gift shop, and a few spots from which you could get a decent view of Seoul even without going up inside the tower. We spent some time mulling among the crowds before taking the cable car back down and returning to Myeongdong in another taxi. 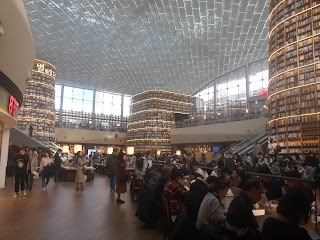 From Myeongdong we took the metro to Samseong-dong, which is in Gangnam, and walked through the station directly to Starfield COEX Mall. And inside the mall was our next destination, Starfield Library! It's a massive two-story library that opened in 2017, and it's free to visit and read the tens of thousands of books that it holds (not sure how borrowing goes, or if that's even an option). Again, like Bosu-dong Book Street in Busan, my bookworm self just wanted to see the place in person. It's in the middle of the mall, so there are tons of people passing through but also tons of people gathered in various sitting areas to read, study, take photos, or just hang out. We were really in a rush by this point, so I didn't get to explore and appreciate it as much as I would have liked. We basically just stood looking around for a couple minutes, took a couple pictures, and then left. But seriously, Starfield Library is so beautiful. Even with all the noise and the crowds, seeing how the light filtered through the gigantic windows and the book collections towered over us on lit-up bookshelves, observing how each visitor managed to carve their own little cloud of solitude in the chaos.... My, what a beautiful place. 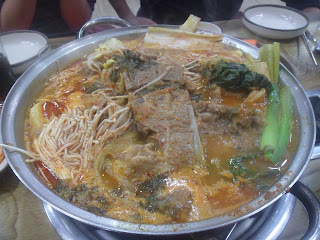 We walked through the mall to get bubble tea and cookies before taking a different bus from Gangnam back to Suwon. Once in Suwon, we met Ande's boo at a restaurant for gamjatang (pork bone and potato soup). Gamjatang was Sharon's favorite dish from when she previously visited Ande in Jeju, and Ande's boo picked this place since it was on his side of town. 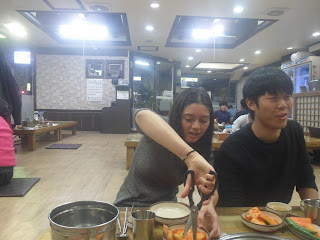 This was my first time meeting him, and after hearing about him for so long it was funny to see the real person in the flesh. Ande had shown me pictures, and during one of their daily phone calls he even had her pass the phone to me so that he could welcome me to Korea on the night that I arrived. Now at dinner, everything came together and he was exactly as I'd imagined. Very kind, intelligent, good sense of humor, spoke English beautifully, and exceedingly hospitable just like Ande. We all had a good ole time sitting on the floor eating and conversing, and at the end Ande and her boo revealed that the meal was on them. They'd wanted to send us off with a nice goodbye dinner, so this was their treat to us. We parted ways with Ande's boo at the restaurant and then took a bus to Ande's neighborhood so that we could turn in early. 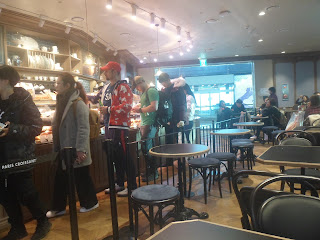 On Monday we woke up and got ourselves together early enough to take a taxi and catch the 6:00am airport limousine bus to Incheon Airport. The Winter Olympics had just ended the night before, and we didn't know what flying out of Incheon would be like, so we erred on the side of caution and sacrificed sleep in order to give ourselves plenty of time. Thankfully, it wasn't nearly as crowded or disorganized as I'd anticipated (my last time flying internationally back to Detroit was out of Charles de Gaulle in Paris, and that was almost a nightmare). It probably helped that we were flying out of Terminal 2, the newer of the airport's two terminals, and only a select handful of airlines fly through it. People from every country you could imagine were trying to get out of there that morning, and though we were all eager to get to where were headed, folks were remarkably calm and patient. 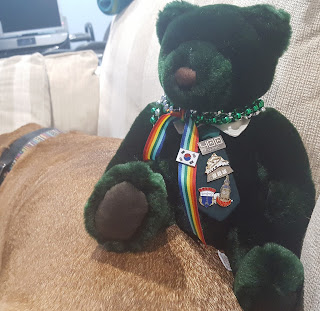 And of course, Olympians were all over the place! Athletes from the USA, the UK, Germany, and a couple other countries were on the same flight as me and Sharon. Among them was the gold-winning USA men's curling team, and people bombarded them for photo ops at the gate in Incheon, during the flight, and at baggage claim in Detroit. The only athletes I cared about in the slightest were USA bronze figure skaters Alex and Maia Shibutani, or the Shib Sibs, and even then I only recognized them from YouTube. Like I said before, sports is not my thing. But one perk of being in the company of Olympic athletes is that you get free booze! The captain had the flight crew give everyone a glass of champagne so that the whole plane could toast to the Olympians' hard work and success.

This flight went directly from ICN to DTW, so I was spared a repeat of the mess that was Seattle. And just like she always is, Ma was there waiting for me. Sharon hopped in her boyfriend's car, I hopped in my mom's, and with that the trip was completely over and we went to our respective homes.

As I mentioned when I first started writing about this trip, I'd never envisioned myself going to Korea so nearly in the future. I'm grateful to have been able to have this experience, and so many thanks are in order. 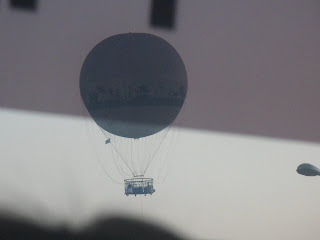 Thanks to Sharon for inviting me in the first place, and for letting my suitcase fly home in Sky Priority even though I didn't. Thanks to Ande for taking time off work, letting us take over her life, and literally being our everything during our stay. She was our host, our navigator, our interpreter, our friend, and she always made sure we ate well and were comfortable. Plus she handled most transactions and kept a tab running for us so we didn't have to worry about paying her back until the night before we left. Double thanks to both Ande and Sharon for waiting for me whenever I slowed them down, which was often. Thanks to Ande's boo for being such a cool dude, not being mad at us for monopolizing Ande's time, and taking time from his busy schedule to eat with us. Thanks to Ma for helping me to prepare, talking me down from my usual pre-travel panic, learning how to use WhatsApp so she could communicate with me while I was away, and taking me to and from the airport. Thanks to Suwon for being home base for two weeks. Thanks to Seoul for being abundant, alive, and yet not overwhelming. Thanks to Busan for letting me see water and meet King T'Challa. Thanks to South Korea for being a beautiful country, keeping me full, building my thigh muscles, and teaching me to relax and rely on people more. And glory be to God for providing an escape when I felt like I was drowning at home. Bless you all.

Hopefully this won't be the last new journey for me in 2018.