Our only real goal for the day was going to Ihwa Mural Village, where a neighborhood on a hill is full of street art that's painted or installed on walls, staircases, and roofs. You can also get some pretty stunning views of Seoul from up there, though as one shopowner told us, the view's probably  more impressive at night. 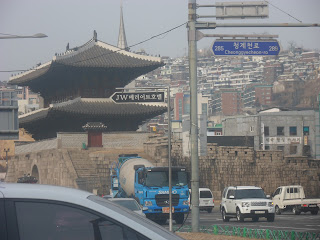 After alighting from our usual bus into Seoul we took the metro to Dongdaemun, one of numerous major shopping areas, where we ate gimbap (similar to a maki roll), tempura udon, and bokkeumbap. From there we walked down a major street for a long stretch before turning down a neighborhood street that took us up a steeeeeep hill that led us to Ihwa Mural Village.

There's art all along the way, but you have to climb a multitude of stairs and reach the top in order to see everything. As soon as we got up there a rack of colorful bookmarks sitting in front of a shop with blue walls caught my eye, and the owner came out to talk to us and invited us in. The shop was full of little cutesy handmade trinkets, most of which the owner had made herself. 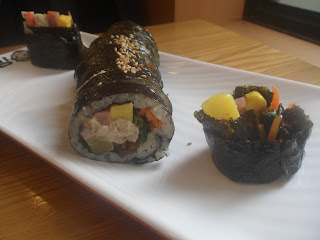 Cutesy isn't really my thing, so I wasn't going to buy anything at first. But I appreciated so much how she wasn't too scared to invite two foreigners into her shop, show us her items, tell us about her travels, and not be pushy in any way (she even gave us slight discounts!), that I bought an amigurumi-style giraffe keychain. She told us to take an alternate route through the neighborhood to see as much of the view as possible, and then off we went exploring. 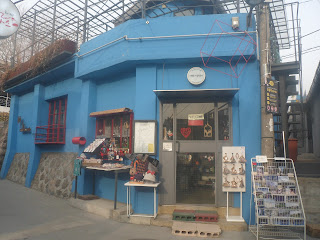 I must mention that even if you do get to the top, you still might miss some things, as the art in this neighborhood periodically changes. While there are many cafes and restaurants that welcome the increased foot traffic, other residents are not so happy to have multitudes of potentially loud and messy tourists taking up space in their neighborhood everyday. Before we went to Ihwa, I read that some residents have even destroyed or obscured some murals in protest. 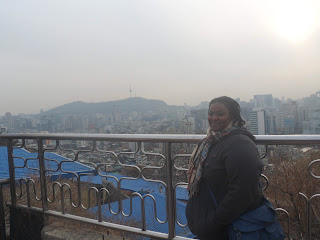 For example, there once was a large staircase with koi fish painted on a blue background, and it was one of the most popular sights in the neighborhood. As Ande and I were going down a set of stairs to leave Ihwa, a guy who was coming up from the opposite way asked us where to find said koi staircase. We hadn't seen it, so we told him where most of the other art pieces where and wished him good luck. 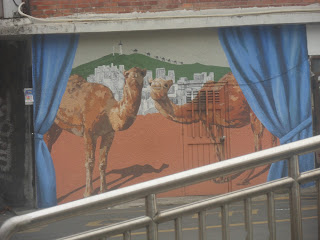 It wasn't until we got to the foot of the stairs and turned around for one last look at the neighborhood, that we realized that the brusquely-painted grey stairs had faded blues and oranges peeking out from under the grey. We'd been on the koi staircase the whole time, but it had been painted over by a disgruntled resident! So that guy was looking for something that didn't exist anymore. And I can't blame whoever painted over the stairs, it is what it is. I'm just saying, if you put together a list of art pieces that you want to see from searching Instagram and Google Images, don't be surprised if they look different are aren't even there by the time you actually visit Ihwa. 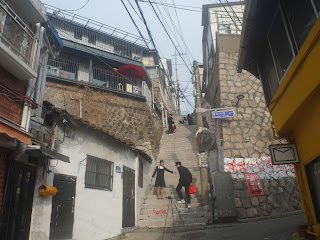 After moving further downhill and through other parts of that district, we stopped for rest and tea/coffee at a toast cafe owned by a woman whose son is a student in the University of Texas system. I only mention that because I remember reading a sticker saying as much on her refrigerator, and she was a woman who spoke kindly to us and appeared to run the entire place by herself (except for a young man who was cutting and prepping ingredients with her in the kitchen). 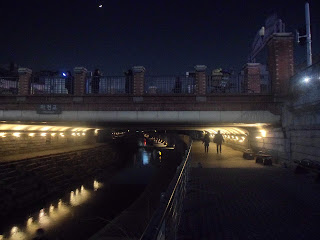 It was dark by the time we left that cafe, and I followed Ande's lead as we walked toward Cheonggyecheon stream, which we'd orginally passed by when we walked briefly through Dongdaemun earlier in the day. We walked along the stream until we got to an area with a lot of tall buildings and a direct view of Namsan Tower. I believe this was the night that jet lag finally hit me, and even though it was only about 8pm, I was so tired that I felt like I couldn't go on, haha!* So we made our way back to Suwon. 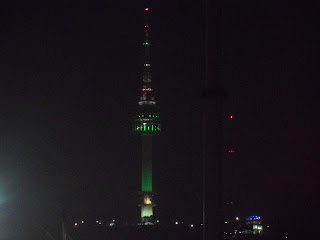 Ande had some personal business to take care of in the morning, plus she wanted to spend time with her boo and his parents, so we stopped to get carry-out (wings from KyoChon Chicken) and she dropped me off at her place before going to spend the night at her boo's parent's place. I spent the night solo in her apartment, and this was the only night where I slept on Ande's bed just to see how it felt. Still preferred the heated floors, though!

On Tuesday, we made a brief excursion into an area known for its abundance of foreign people and cuisine before going to the airport to pick up Sharon. More on that tomorrow! 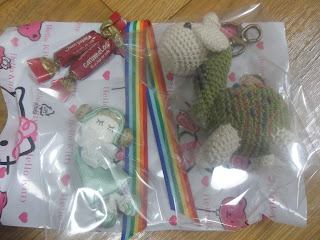 *(Correction: The jet lag thing actually happened on Sunday, after being in Hongdae. For Monday night, I think we decided to head back after seeing Namsan tower because it was cold and my feet and thighs ached. A funny thing, memory is.)