We got a late start, but still managed to have brunch and visit a temple before the sun went down. And then, I met royalty! 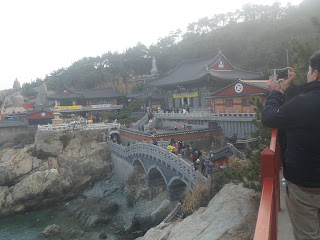 We walked from the Airbnb to a UK-themed spot called Restaurant MINI for brunch, where Ande and I had eggs benedict and Sharon had pancakes. Then we walked a ways to take the metro from Haeundae eastward to Osiria station. A really nice woman at the information center helped Ande call a taxi, and that taxi took us to Haedong Yonggungsa. 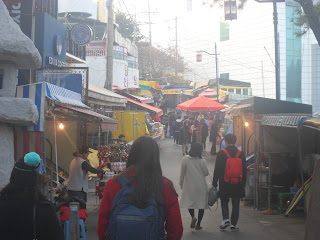 Yonggungsa is a Buddhist temple that's right on the edge of the sea, and it has such beautiful scenery and views of the water that tourists flock to it nearly every day. But again, it's a temple, so while a lot of people come to snap photos, others come to pray or just to appreciate the surroundings. We decided to check it out because it seemed like a peaceful and culturally-relevant place to visit.

It's free to enter, though there are plenty of ways to dispense money if you're so inclined. The path that leads to the temple is lined with vendors selling food and souvenirs. 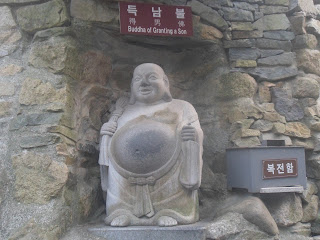 There's a long winding path and then tons of stairs you have to go down before you reach the temple, and multiple Buddha statues are placed along the way. Each Buddha or set of Buddhas has a donation box near it and offers a different type of good luck to people who pray in front of it and/or donate money. Ande's got a professional exam coming up, so as we left the temple later on she left money and said a little prayer in front of the Buddha for Academic Achievement. One of Buddhas at Yonggungsa has both a donation box and a discolored belly from all the people who've rubbed it. This Buddha promises the birth of a son and is also the first one that people pass on their way to the temple, so understandably it is quite popular. 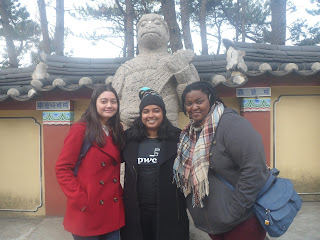 So at the beginning, you walk past the vendors, then you go through an open set of doors, and the path widens and is lined with massive stone statues. On the left side are 12 statues representing each of the Chinese zodiac signs, and a fellow visitor took our picture as the three of us posed in front of the Monkey (we'd realized that all three of us are '92 babies). 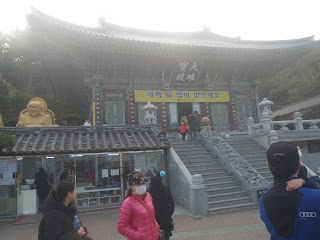 Then you keep straight, turn left at the giant pagoda and go down some stairs, go through a tunnel, go down even more stairs, and then you can choose whether to continue your descent toward the temple, or turn left onto a path the leads to a giant golden Buddha and a view of both the sea and the temple at the same time. We went left first before returning to take the rest of the stairs down to the bridge that connected to the temple grounds. A couple of the buildings were closed or their function wasn't immediately clear to me, but the main prayer room was open, and monks chanted inside while people repeatedly knelt to pray. 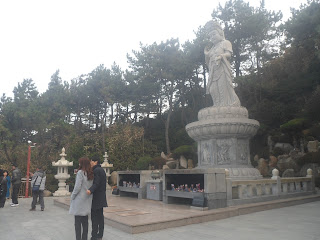 There's another golden Buddha next to this building, and then there are two flights of stairs that lead to and from a hill on which stands the tallest statue of the entire temple grounds. There were mats and candles set out for people to pray in front of the statue, but most people went up there to look down on the sea and temple from up high. 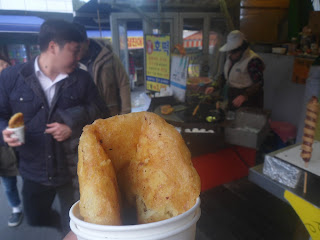 We left Haedong Yonggungsa not long after descending from the hill, and before hailing a taxi we stopped at the stall of an older woman who was frying hotteok (sweet fried pancake). Way back when we were discussing all the Korean street food that we wanted to try (but didn't actually end up trying), Ande couldn't say enough about how good hotteok was, so when we neared the stall Sharon and I bought one each. Hotteok's exterior is crispy like a hushpuppy or hotwater cornbread, but the interior is chewy and usually has some sort of sweet filling. Mine had brown sugar and nuts, and Sharon's was about the same.

We took a taxi back to Osiria station and then the metro westward past Haeundae to Suyeong, where Gwangalli Beach is. While not as large or as popular as Haeundae, I personally liked Gwangalli more because there's a lot more activity going on around the beach, and the beach itself has more light installations and art pieces. Plus, there's the Diamond Bridge (Gwangandaegyo), which is illuminated in different colors at night and also appears in the film Black Panther. 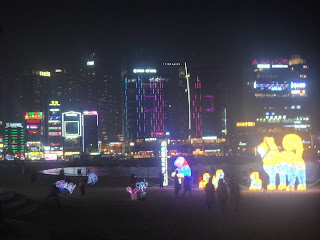 And speaking of Black Panther! I met T'Challa, king of Wakanda while walking along Gwangalli Beach! It was dark and cold so we didn't feel like walking in the sand this time, so we walked on the sidewalk instead. At one point Ande and Sharon were ahead of me, and suddenly they started calling for me to hurry up so that I could see whatever it was they were looking at around the corner of some building. When I caught up to them I gasped so loudly that I startled a Korean man who'd been staring at the same thing. There, under a big ole spotlight, crouching in his fight stance, was a statue of THE Black Panther! Turns out that Disney had installed this piece to commemorate the filming that took place in Busan, and it was situated so that no matter what angle you took a picture of it from, the Diamond Bridge would always appear in the background. I almost cried. 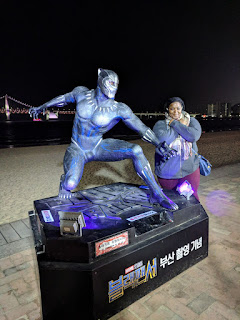 Ande and Sharon had been trying to get me to let them take pictures of me every day of the trip and I refused, as I'm prone to do. But this time I nearly threw my camera at Ande and asked both her and Sharon to snap me standing next to T'Challa with my arms across my chest forming the Wakanda salute. Seeing a black figure featured in such a public way in Korea was one of the happiest moments of the trip. Of my life, even! And he was definitely black! I got an extremely close look of the statue's face to make sure Korea and/or Disney ain't try to play me, and it was visibly a black man's skin and brown eyes peeking out from that mask. Sadly, the Black Panther installation was randomly destroyed a week ago, and I haven't heard of any plans to repair and reinstall it. Which is disappointing, but it also makes me that much more grateful for that moment I had posing with T'Challa. Oh, what a moment it was! 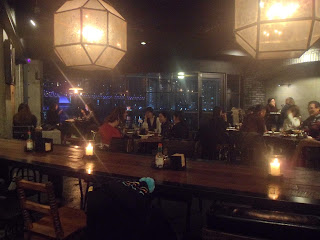 We continued walking along the beach until we reached our dinner destination, a New York-style pizza restaurant called SOL Taphouse. All the staff were nice young Korean people who all spoke English exceptionally well, the slices were huge, the interior was dark but warmly lit, and the windows allowed for a pleasing view of the sea and the Diamond Bridge. 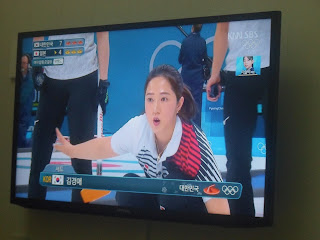 From the restaurant we walked through Suyeong to take the metro back to Haeundae, made our habitual snack stop at the convenience store, and then retreated to the Airbnb where we watched Korea beat Japan in women's curling before flipping through the other channels and going to sleep.

Saturday was our last day in Busan, but we made sure to visit a few more sites before boarding the train back to Suwon. More on that tomorrow!