Our first day in Seoul as a trio, and our first (only) day having to find our way through Seoul and back to Suwon without Ande acting as navigator! 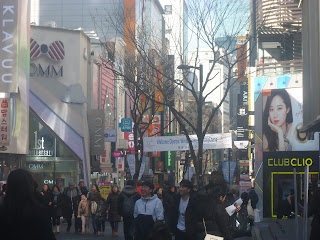 Other than food, Sharon's main priority for her time in Korea was buying skincare products, so our first destination in Seoul was the popular shopping district of Myeongdong. We stopped to have samgyetang (chicken stew with ginseng) which was the only disappointment that I ate while in Korea. I'm not sure if it's supposed to be bland, or if it was the restaurant, or if it was the variation that I ordered, but it was just okay. I left full but not satisfied. From there we walked to Myeongdong shopping street, a pedestrians-only street that's full of high-end brands, especially beauty and skincare stores. I stood outside people-watching while Ande and Sharon explored a beauty store called Missha. Then we spent some time in a cafe eating honey bread (brick toast) and bingsoo (shaved ice) topped with mango. From late afternoon through the night, you can also find food stands on the shopping street as well. Unfortunately we ended up leaving too early to indulge; older men and women were just beginning to park, uncover, and set up their stands when we were on our way out. 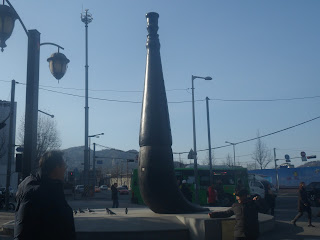 I was able to reconnect with a Korean friend of mine from college who is living and working in Seoul, and she wanted to meet for dinner that evening. We didn't have a strong plan for what to do until then, so we randomly decided to see what Insadong was about. Another shopping area (though not completely free of car traffic), Insadong is known for its ample supply of souvenirs, antiques, and art galleries. But Ande had to head back to Suwon early due to some other commitments, so she parted ways with us in Myeongdong. Which meant that Sharon and I were responsible for navigating the Seoul metro system, Insadong, the metro system again, and then eventually the bus trip back to Suwon all on our own. The metro system I wasn't too concerned about thanks to the Subway Korea app, but it'd be dark by the time we caught the bus to Suwon, and those particular buses didn't (as most in Korea don't, I assume) announce the stops in English. So we were in for a little adventure. No worries, right? 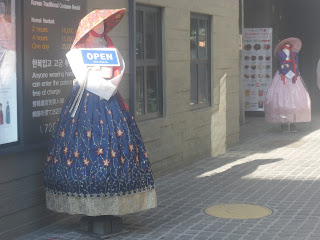 We made our way to Insadong with no problems at all. I can't remember if Ande told us this or if I read it online, but Insadong is basically where you go to buy souvenirs if you want to avoid large crowds. There are tons of stalls and brick-and-mortar shops selling similar Korea or Seoul-related wares. And it has enough people passing through to make the area lively, but not so many as to make it congested. 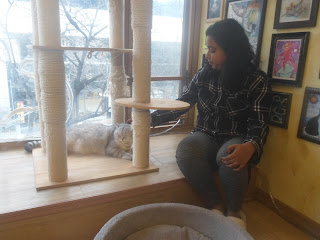 Sharon and I were initially just exploring the area, but we both happened upon items that we liked. She bought a deep yellow skirt from a boutique, and I ended up buying souvenirs earlier than I'd anticipated. Souvenir shopping is one of the last things I do before the end of an international trip. But I managed to find a lapel pin for myself, and shot glasses for the three people back home who explicitly asked me to get them something, and since neither of those items were as easy to find at other shops as I thought they would be, I sprang for them. Then Sharon spotted a cat cafe called 2Cats that she wanted to check out, so we spent about 15 minutes there. She petted the few cats that wanted to be bothered while I drank ginger tea and watched; I didn't remember until after we'd entered that I'm mildly allergic to cats (whoops!), so I didn't get to love on the kitties like she could. It was a really cute cafe, though! 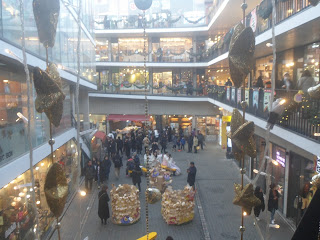 In Insadong there's also a shopping center called Ssamziegil where you can get poop bread (taiyaki-style pastry that's shaped like poop, no actual feces included of course), eat dishes out of toilet-shaped bowls, buy any number of trinkets/art/home goods, and get a comprehensive view of the surrounding area. I'd originally wanted to try the poop bread there, but I didn't have an appetite so instead we went to the top of the mall just for kicks. As you go up, the floors become slanted so that you don't have to take the stairs or exert a lot of energy as you go. We puttered around at the top of the mall for a bit before heading back down and returning to the metro. 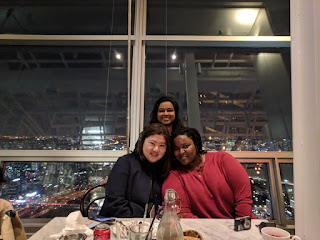 Our next and last stop for the night was Yeouido, which is where my college friend Eunbong wanted to meet us. Yeouido is a little island in the Han River, and Eunbong told us that it's basically Seoul's version of Wall Street, where most of the investment banking and finance entities are. After waiting in the cold at the wrong exit of the station (my fault), Eunbong found us and led us to Skyfarm, a fancy restaurant at the top of an office building (50th floor!). She hadn't been able to get us a reservation beforehand, but lucky for us there was an open table right in front of the floor-to-ceiling, wall-to-wall windows. It was dark by the time we got there, so we got a magnificent view of the National Assembly building, Yeouido Park, the Han River, and other parts of Yeouido all lit up. 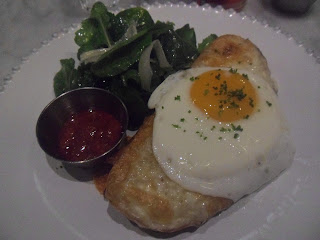 And the food was excellent! The restaurant served western food, so I had croque madame while Eunbong had pasta and Sharon had a hanwoo beef sandwich. I had such a great time catching up with Eunbong and listening to her talk about her plans, the Korean education system, and Korean work culture, but I got the feeling that it got boring for Sharon pretty quickly. Or maybe she was just tired. I brought her along so that we could stay together the whole day and wouldn't each have to find our way back to Ande's place alone, but then again I did drag her with me to have dinner with a stranger, so. Eh well. 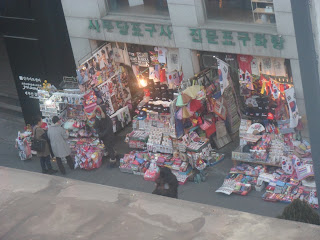 Eunbong was kind enough to walk us back to the station, and we took the metro back to Sadang station, where we caught the usual bus. Sharon kept an eye out to make sure that we got off at the right stop in Suwon (it was pretty much at the end of the line and was right next to a field, so fortunately it wasn't too hard to discern) and then it was a short walk to Ande's apartment, where Ande was already waiting for us.

On Thursday we would head south toward a completely different city. More on that tomorrow!